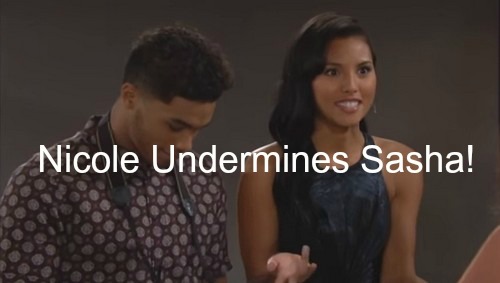 “The Bold and the Beautiful” spoilers for Wednesday, January 13, tease that Nicole (Reign Edwards) will find herself green with envy when she hears about Rick’s (Jacob Young) latest move. Sasha (Felisha Cooper) will inform Nicole that Rick was so impressed with the first photo shoot that he ordered another one.

Nicole will let Rick know that she’s certainly not pleased about Sasha’s modeling gig. By Thursday, Nicole will play the surrogate card in an effort to get Rick’s decision reversed. Since Nicole is giving up so much to carry a baby for Rick and Maya (Karla Mosley), it’s about time they gave her a little something in return. It looks like Rick will be caught in a tight spot.

In the meantime, Sasha will continue to flirt and flaunt. It seems Zende (Rome Flynn) and Sasha will grow closer as they try to make their dreams a reality. Nicole had better watch her back. If Sasha discovers her bestie is meddling behind the scenes, she might make it her mission to steal Zende. Nicole’s jealousy could eventually lead to Sasha’s quest for revenge.

Elsewhere, Katie (Heather Tom) will ponder what daily life will be like now that Brooke (Katherine Kelly Lang) is on board at Spencer Publications. “The Bold and the Beautiful” spoilers say Katie will point out that two Logan women working in the same building could be a challenge. Brooke will also realize that her new position comes with obstacles.

Brooke will do everything in her power to forget about her feelings for Bill (Don Diamont). Brooke will be interacting will Bill more often, which means it’s important for her to keep a professional attitude and set some limits. Brooke has good intentions, but does she have the willpower to follow through with her plans? Things could obviously go downhill fast.

We can’t forget about Bill’s potential temptation either. B&B’s weekly promo shows Bill and Brooke sharing a hot kiss at the office. Is this a fantasy or is a fling on the way? Stick with “The Bold and the Beautiful” for updates on Brooke’s attempt to keep her desires under control.

So B&B fans, what do you think about the news that Sasha will be given a modeling job? Will Sasha want vengeance when she ultimately loses it? Is Brooke playing a dangerous game by working around Bill? Voice your opinion in the comments below and don’t forget to check CDL often for the latest “Bold and the Beautiful” spoilers, updates and news.

The Bold and the Beautiful (B&B) Video Promo for Wednesday, January 13 2016