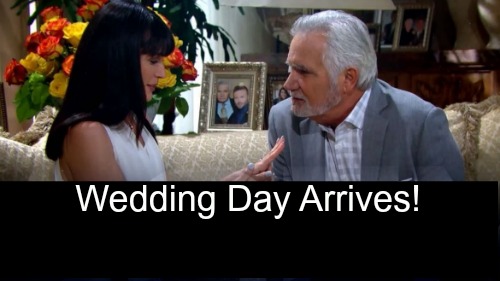 The Bold and the Beautiful (B&B) spoilers tease that the Forresters will pull out all the stops to prevent Eric’s (John McCook) marriage to Quinn (Rena Sofer). Ridge (Thorsten Kaye) and Steffy (Jacqueline MacInnes Wood) have been working nonstop to help Eric see the light. Thomas (Pierson Fode) and Rick (Jacob Young) haven’t been shy about their disapproval either.

Unfortunately, their passionate pleas aren’t changing Eric’s mind. If anything, the Forrester clan is just making Eric more determined to make Quinn his wife. He doesn’t like the idea of his children and grandchildren telling him what to do. Nevertheless, the team against Quinn will soon have some reinforcements.

The Bold and the Beautiful spoilers reveal that Thorne (Winsor Harmon) and Felicia (Lesli Kay) will get updates on Eric’s impending wedding. They’ll return to help the rest of the Forrester brood talk some sense into Eric. They just can’t get it through their heads that talking isn’t going to work. The Forresters can insult Quinn all they want. Eric doesn’t intend on backing down from this decision.

Once the family has exhausted all options, they may have no choice but to sit back and let Eric make his own mistakes. The Bold and the Beautiful spoilers indicate that Eric and Quinn will indeed have a wedding of some sort. Obviously, they won’t be surrounded by loved ones for this special occasion.

Quinn should be used to that by now. Her wedding to Deacon was a pitiful little spectacle. Luckily, Quinn doesn’t care about a fancy ceremony that’s full of beaming faces. All she wants is to be Mrs. Eric Forrester. Will Quinn get her wish? It’s tough to say. Soap fans know that weddings are often interrupted. 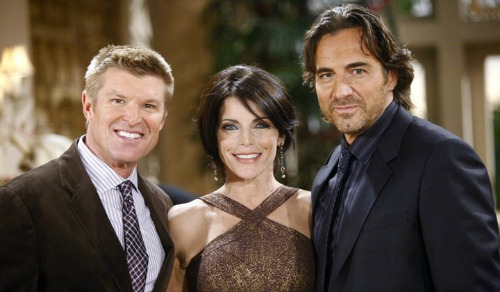 It’s possible that a major exposure will go down and the whole thing will be called off. Then again, maybe it’ll just be more of the usual “Quinn is poison” rambling. In that case, Eric and Quinn might actually say “I do” after all.

Julius caused quite a scene at Maya’s (Karla Mosley) wedding, but she managed to tie the knot anyway. Quinn and Eric may do the same. They could ignore any obstacles that arise and just focus on their love. If Eric and Quinn officially wed, what would that mean for B&B’s storylines?

Steffy might realize that Quinn is going to be in her life no matter what. That could push her to give things another shot with Wyatt (Darin Brooks). On the other hand, it could make Steffy so fed up that she dumps Wyatt immediately. This could go either way.

As for Eric, an actual marriage would raise the stakes. He’s going to feel like an idiot when he finds out Quinn is the same schemer she always was. When Quinn’s evil ways pop up again, will Eric divorce her or just embrace the dark side? You never know. Love can make people behave in strange ways.

Whatever happens, it’s sure to involve some great drama. We’ll keep you posted as more news comes in. Stay tuned to B&B and don’t forget to check CDL often for the latest Bold and the Beautiful spoilers, updates and news.

So happy to see dear friend @winsorharmon back at work on @BandB_CBS love ya Wins! 😘👍🎉@boldinsider #BoldandBeautiful pic.twitter.com/GMemHtbW4q