The Bold and the Beautiful Spoilers: Quinn and Steffy BOTH Pregnant – B&B Dual Baby Bombshell? 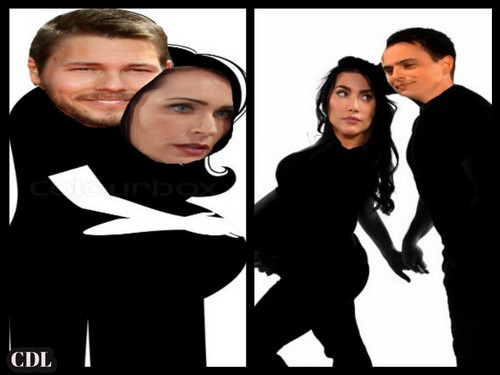 “The Bold and the Beautiful” (B&B) spoilers tease that Quinn Fuller (Rena Sofer) may be glowing for a very special reason – has she gone and gotten herself knocked up by Liam Spencer (Scott Clifton)? And could Steffy Forrester (Jacqueline MacInnes Wood) also turn up preggers?

This whole love quadrangle is very messy. We are accustomed to Wyatt Spencer (Darin Brooks) and Liam triangling over some woman, but throwing Wyatt’s mom into the mix makes it four times as disturbing. Also unsettling is the comment Liam made about Quinn ‘glowing.’

The Bold and the Beautiful spoilers as if ‘glowing’ was hinting to viewers that she’s pregnant? Quinn and Liam, as Adam and Eve, have talked about having kids and why they didn’t already. Quinn, of course, is making this all up as she goes along. Good thing Liam is not only amnesiac but has apparently gone dumb in the head.

He’s buying everything she says and when Quinn was ready to practice baby making, Liam was ready for it since he has no idea he’s a brother mother lover. B&B spoilers suggest that Liam is in for a life-altering stunner when he gets his memory back and realizes he’s been with Quinn.

But if Liam happened to get her pregnant, his brain might short-circuit all over again. And with Steffy and Wyatt getting busy constantly and her spotty past with fertility, she may not be vigilant about her birth control.

Could Steffy and Wyatt turn up pregnant as well as Liam and Quinn? Or, worse yet, what if both were pregnant by Liam? That family tree would look like an inbred branch-crossing mess. Most horrified of all might be Bill Spencer (Don Diamont).

After all, he was involved with Quinn and had Wyatt, then was later briefly involved with Steffy. And now his son involved with his other son’s mother. Wow. You have to give the B&B writers credit for really going for it.

Fans are outraged, but they’re still watching – like rubbernecking at a terrible, bloody car crash. What’s next for Adam and Eve? Let’s hope it’s baby makes three and that it coincides with a Steffy pregnancy as well. That would amp up the drama to the nines.

This week, Quinn will show Liam a photo album that Deacon Sharpe (Sean Kanan) photoshopped for her. He took pics of Steffy and Liam and pasted Quinn’s head over Steffy’s. Let’s hope Deacon did an admirable job, but even if he did, this could be a bad play.

What if Liam gets memory flashes of the scenarios where those photos were taken but remembers another woman’s face instead of Quinn? How much longer can this amnesia last and what will Liam be doing when his memory comes back?

Will he wake up in bed cuddled up naked with Quinn and be terror struck? Will he know Quinn is pregnant before his memory comes back? Or will Liam get his memory back but then get hit by the sucker punch that he knocked up his brother’s mother?

B&B spoilers reveal another three to four weeks of the amnesiac storyline before Liam comes to his senses. How far will things go before all is said and done? What do you think B&B fans? Share your comments below and come back to CDL often for more “The Bold and The Beautiful” spoilers.