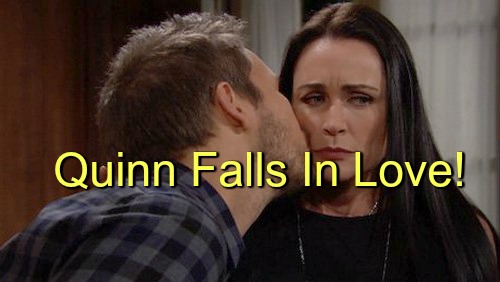 “The Bold and The Beautiful” (B&B) spoilers hint that Quinn Fuller (Rena Sofer) and Liam Spencer (Scott Clifton) are ripe for a twisted new romance that will shock everyone at Forrester Creations and Spencer Publications – and could rip the Spencer family apart.

When Quinn first took Liam up to her cabin, it was to buy time for Wyatt Spencer (Darin Brooks) to get cozy with Steffy Forrester (Jacqueline MacInnes Wood), but now the worm is turning. Quinn is finding herself feeling protective and affectionate towards Liam.

This is a far cry from her past attempts to murder her son’s brother – and indicates that a strange new attraction is brewing. With no memories of their past relationship, Liam is obviously drawn to his beautiful caretaker.

And while Quinn was at first disturbed by his affection, now she’s haunted by it and seems to want more. Quinn is a troubled sort – in coming days we’ll see flashbacks to her childhood to explain what sort of abuse she survived and why she’s as manipulative as she is.

In the meanwhile, Liam will move closer to Quinn and she reluctantly finds herself falling for the most inappropriate of men. We know she loves a Spencer man – and that’s what Liam is… What makes this storyline really interesting is what will happen when Liam regains his memories.

He will be horrified that he’s been with his brother’s mother – but won’t be able to fight his attraction for her. Looks like this will be much more than an inappropriate shag – and could be a full-fledged May-December romance.

And the fallout will be spectacular. Bill Spencer (Don Diamont) will be horrified that his son Liam is hooking up with his other son’s Wyatt mom. And Wyatt will be disgusted and assume that his mother seduced Liam to allow him time to seduce Steffy.

Steffy may assume that Wyatt was in on the plan with his mother to keep Liam away while Quinn worked on Liam and Wyatt worked on her. And everyone may assume this was a really sick scheme cooked up by Quinn with Wyatt’s knowledge.

And with Ivy Forrester (Ashleigh Brewer) back in coming weeks, that will only complicate matters. Steffy may reject Wyatt and turn back to Liam, only to find Liam can’t get Quinn off his mind – or out of his heart.

Liam and Quinn will not want to couple up – because of the nuclear reactions in the family – and because of their violent and hateful history. But that may not be enough to keep them apart. Could this be real love? Are we looking at a super couple pairing of “Quiniam”?

What do you think? Is this the plot twist that Liam needs to give him some depth and make his character more interesting? And could Liam’s sweetness and sincerity be the magic bullet to make Quinn more human?

Share your comments below and check back with CDL for more “The Bold and The Beautiful” spoilers.