The Bold and the Beautiful (B&B) Spoilers: Sasha Makes Her Move On Zende – Katie Struggles With Emotional Turmoil

BY Heather Hughes on February 1, 2016 | Comments: one comment
Related : Soap Opera, Spoiler, Television, The Bold and the Beautiful 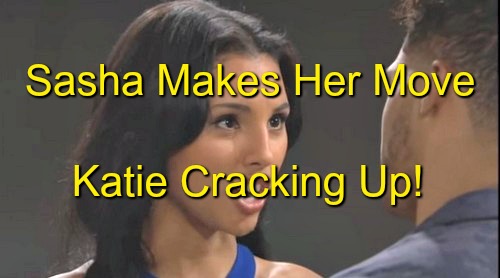 “The Bold and the Beautiful” spoilers for Tuesday, February 2, tease that Sasha (Felisha Cooper) will have another confrontation with Julius (Obba Babatunde). They’ve both made their positions clear, but it seems Nicole’s (Reign Edwards) recent actions have fanned the flames.

Sasha will remind Julius of how she’s been wronged while Nicole has had everything handed to her.

Sasha will also get pretty nasty about Nicole’s relationship with Zende (Rome Flynn). “The Bold and the Beautiful” spoilers indicate that Sasha will comment on Zende’s good looks. She’ll suggest that Zende is “way too fine for that nerdy Nicole, even on her best day.” Of course, Julius will likely reiterate his stance that Sasha should just get lost.

That will make Sasha even more determined to fight back.

Later, Sasha will have a flirty chat with Zende. She’ll point out that she doesn’t owe Nicole anything. Since Nicole stabbed Sasha in the back, the idea of loyalty has gone out the window. There’s definitely some bad blood between these two.

Meanwhile, Brooke (Katherine Kelly Lang) will express regret over her love confession. B&B spoilers say Brooke will feel guilty about stirring up all of this trouble. She should’ve realized that no good would come from revealing her true feelings. Now Brooke’s bond with Katie (Heather Tom) has been completely destroyed.

Bill (Don Diamont) will do his best to make peace between these sisters, but he’ll fail miserably. It’s possible that Katie will come around, but it’s certainly not going to happen anytime soon. Bill won’t be able to control Katie as she deals with this emotional turmoil.

Naturally, Katie is feeling incredibly hurt. She just can’t understand why Brooke would make a move on her husband when she claimed to love her. Katie and Brooke obviously have major issues. Unfortunately, there’s no clear-cut answer on how to work them out. Stick with “The Bold and the Beautiful” for updates on how this relationship will continue to crumble.

So B&B fans, what do you think about the news that Sasha will scheme to get back at Nicole? Will Julius’ attitude prompt Sasha to make the first move? Will Zende be unable to resist Sasha’s sexiness? Is a storm brewing thanks to Katie’s anger and sorrow?