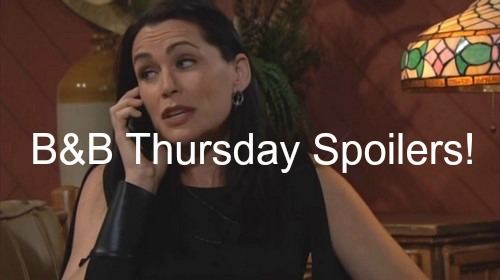 “The Bold and the Beautiful” spoilers for Thursday, January 21, tease that Wyatt (Darin Brooks) will offer encouragement to Steffy (Jacqueline MacInnes Wood). Steffy desperately wants to work things out with Liam (Scott Clifton), but he’s just not interested. Steffy may try to cling to hope a little longer, but Wyatt will insist she shouldn’t have to wait around on Liam or anyone else.

Wyatt will tell Steffy that she’s a great catch and any man would be lucky to have her. Of course, B&B fans know that Wyatt would like to be that lucky man someday. By supporting Steffy through this breakup, Wyatt intends to prove that he’s the more dependable Spencer brother.

Unfortunately, Quinn’s (Rena Sofer) latest plot could get in the way of Wyatt’s plan. “The Bold and the Beautiful” spoilers indicate that Quinn will soon have a big secret. Liam told Quinn that he needed to talk to Steffy again. He passed out before he got the chance. That means Quinn will have to decide what she’s going to do about it.

Thursday’s preview video shows Quinn on the phone saying that Liam isn’t capable of stepping up for Steffy right now. Many viewers have been speculating that Quinn might hold Liam hostage so Wyatt won’t have any competition. Quinn’s phone call seems to be tipping someone off about Liam’s incident, but the previews can sometimes be deceiving.

Maybe Quinn is only spilling part of the story. Perhaps Quinn will say Liam was so emotionally distraught that he rushed back to Ivy (Ashleigh Brewer) in Australia. Since Quinn and Deacon (Sean Kanan) separated, she no longer has him as the stable voice of reason in her life. Quinn could easily head down another dark road.

Meanwhile, Brooke (Katherine Kelly Lang) will worry about creating strife at Spencer Publications. If Liam might be coming back, Brooke will point out that she doesn’t want to be a source of family tension. However, Brooke is certainly going to cause plenty of drama anyway.

Next week, Bill (Don Diamont) and Brooke’s betrayal will send Katie (Heather Tom) over the edge. You can expect the situation to get ugly. Stick with “The Bold and the Beautiful” for updates on the chaos to come.

So B&B fans, what do you think about the news that Wyatt will try to help Steffy out of this slump? What will Quinn’s secret be? Are you on board with Brooke and Bill’s upcoming fling? Voice your opinion in the comments below and don’t forget to check CDL often for the latest “Bold and the Beautiful” spoilers, updates and news.

Next On The Bold and the Beautiful (B&B) Video Promo for Thursday, January 21 2016