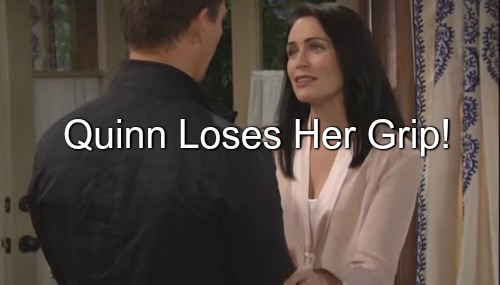 “The Bold and the Beautiful” (B&B) spoilers predict a shocking ending to this week’s episodes. “The Bold and the Beautiful” spoilers reveal that Deacon (Sean Kanan) will return to Quinn’s (Rena Sofer) cabin to talk some sense into her. Deacon told Quinn he’d keep quiet about her scheme, but he’s probably having second thoughts. Things are quickly getting out of hand.

Quinn claimed she just wanted to give Wyatt (Darin Brooks) time to woo Steffy (Jacqueline MacInnes Wood). However, it seems Quinn has a new reason to keep Liam (Scott Clifton) stashed away. Quinn has fallen for Liam and she may not want to give up her new “hubby.”

Deacon will insist that Quinn needs to stop the madness. “The Bold and the Beautiful” spoilers say Deacon will wonder how long Quinn thinks she can keep this up. Does Quinn plan on holding Liam hostage forever? Quinn will likely make excuses, but Deacon won’t buy them. He’ll start to suspect that Quinn is in love with Liam.

Technically, “Adam” is the one Quinn has feelings for. She’s simply drawn toward someone who doesn’t judge her for her past. After all, Liam only knows what Quinn has told him. He doesn’t have a reason to hate Quinn yet. Unfortunately, Quinn is just playing house with her faux husband. They can’t live like this indefinitely.

B&B spoilers reveal that Deacon will urge Quinn to come clean. He’ll believe she needs to do the right thing before she makes it any worse. Quinn could face charges if Liam chooses to press them. Plus, Wyatt will be upset by the news that his mother is up to her old tricks. Obviously, Quinn doesn’t have much faith in Wyatt’s ability to get a woman on his own.

This week will end with a shocking moment. What could it be? It’s possible that Liam’s memory will finally come back. Then again, Deacon might decide to take matters into his own hands and spill the beans. Steffy and Wyatt could easily learn the truth.

Of course, Quinn might take drastic action to prevent that from happening. Who knows what Quinn is capable of at this point – or at any point? Whatever happens, it sounds like Quinn’s plot is beginning to unravel. It won’t be long until Quinn’s sneaky activities are exposed. Stick with “The Bold and the Beautiful” for updates on the fallout of Quinn’s mischievous plan.

So B&B fans, what do you think about Deacon’s attempt to get through to Quinn? Will Quinn refuse to come forward? What’s the shocker that’s coming? Will Liam or someone else learn what’s been going on? Voice your opinion in the comments below and don’t forget to check CDL often for the latest “Bold and the Beautiful” spoilers, updates and news.