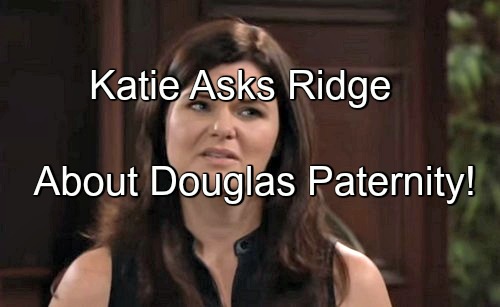 “The Bold and the Beautiful” (B&B) spoilers for tomorrow’s episode, Friday, April 22, tease that Steffy (Jacqueline MacInnes Wood) will talk to Ridge (Thorsten Kaye) about her current situation. She’ll admit that Liam’s (Scott Clifton) return has thrown her for a loop. Although Liam means a great deal to Steffy, her vows to Wyatt (Darin Brooks) were very real.

Steffy will indicate that she can’t pretend she didn’t marry Wyatt or that she doesn’t have feelings for him. Meanwhile, Liam will bicker Wyatt about stopping all of this nonsense. He’ll suggest that Wyatt needs to step aside and let Steffy have what she really wants.

Wyatt won’t be on board with that idea. He’ll think that Liam doesn’t understand what Steffy wants anymore. It’s clear that the rivalry has been reignited for the Spencer brothers. When are they going to learn that nothing good comes from sharing women?

Other “Bold and the Beautiful” spoilers say Rick (Jacob Young) will suspect that Ridge is covering something up. He won’t know what Ridge is hiding, but he’ll feel like Katie (Heather Tom) could help him figure it out. Rick can tell that Katie is in on this dark secret.

His interest is definitely bad news for Ridge and Caroline (Linsey Godfrey).

Speaking of bad news, Ridge will get the first round of it when Katie confronts him at the office. After Dr. Wolin (Mark Damon Espinoza) died, Ridge thought his problem was solved. He was convinced that no one else could spill the truth. Unfortunately, Katie is now aware of Ridge’s deception.

She may blow everything if Ridge can’t secure her silence.

He’ll urge Katie to keep her mouth shut about anything she heard.

Will Katie be able to stay tight-lipped with Rick lurking around? Time will tell, but it seems like Katie is poised to play a crucial role in how this secret comes out. Stick with “The Bold and the Beautiful” for updates on the intense drama ahead.

So B&B fans, what do you think about Wyatt and Liam’s argument? Should Wyatt step aside or remain committed to Steffy? Will Rick discover the truth through Katie? How much longer can Ridge keep everything under wraps?