The Bold and the Beautiful Spoilers: Ridge and Brooke Share Passionate Kiss – Love Triangle Heats Up as Bill Loses Brooke 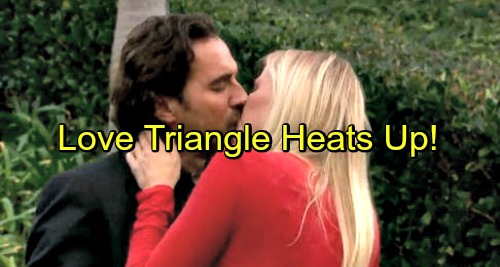 The Bold and the Beautiful (B&B) spoilers tease that Ridge (Thorsten Kaye) and Brooke (Katherine Kelly Lang) will have a few issues to deal with. When RJ (Anthony Turpel) objected to his mom’s engagement, Brooke chose to postpone her marriage to Bill (Don Diamont). Of course, there was likely a deeper reason for the delay.

B&B fans can tell that old feelings have been stirred up for Ridge and Brooke. They’ve been inching toward a reunion for a long time and it’s finally about to happen. However, there will be some complications to sort out.

Ridge hasn’t been divorced from Caroline (Linsey Godfrey) for very long, but he tends to bounce back from failed relationships pretty quickly. That won’t be a problem, but Bill’s shares in Forrester Creations might be. They would still like to get their hands on those holdings if possible.

On the other hand, maybe Quinn (Rena Sofer) will be able to prove herself now that she’s in control. She has Eric’s (John McCook) power of attorney and she intends on being a fierce advocate. It’s clear that Quinn desperately wants to please her husband. She probably won’t do anything to jeopardize her relationship.

If Quinn can hang in there and do the right thing, the Forresters might see that she’s not so bad. Quinn can’t erase her past, but she’s trying to change her present and future. If the family senses that Quinn is no longer a serious threat, perhaps they’ll lighten up a little. 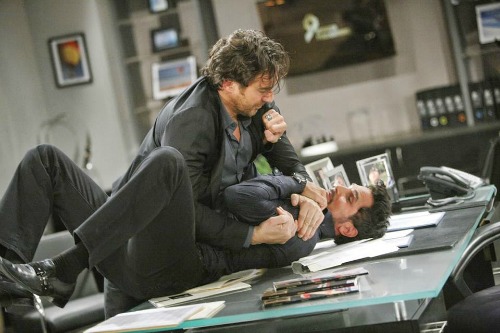 In that case, Ridge would have no qualms about stealing his ex from Bill. Brooke obviously cares about Ridge. She claims she wants to build a life with Bill, but her eyes tell a different story. The Bold and the Beautiful spoilers indicate that Brooke may wonder if she’s chosen the wrong man again.

Naturally, Brooke will have some reservations about leaving Bill. She destroyed his marriage by confessing her feelings. Everything went downhill from there. Brooke may have trouble backing out of this engagement since she already wrecked Bill’s love life.

Nevertheless, Brooke can’t ignore how she feels. Since Bill devastated Katie (Heather Tom), you could argue that this is simply payback. What goes around comes around, especially on a soap. Bill isn’t exactly Mr. Prince Charming anyway. He can be a bit sleazy and B&B may be hoping we’ll root for Ridge in this scenario.

Regardless, a lip lock is coming. The Bold and the Beautiful spoilers state that Brooke and Ridge will share a passionate kiss. They’ll get swept up in the moment and it could lead them down a new path.

Brooke might try to fight her feelings, but that may not last long. When it comes to men, Brooke can’t seem to help herself. She usually caves in and gets together with the one she really wants. Will Brooke decide that Ridge is the man she’s meant to be with?

We’ll give you updates as more news emerges. It sounds like some great drama is brewing. Stay tuned and don’t forget to check CDL often for the latest Bold and the Beautiful spoilers, updates and news.

TODAY: Zende is shocked at Rick and Maya’s request… pic.twitter.com/ZtfvvhLsLX