The Bold and the Beautiful Spoilers: Ridge and Steffy Cook Up Sneaky Scheme – Plan to Keep Eric Away from Quinn Fails Miserably 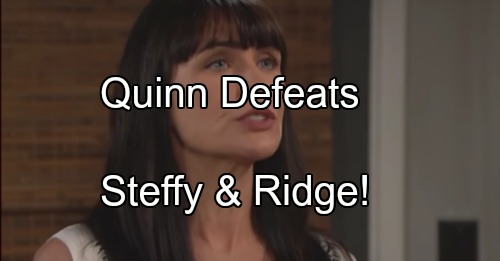 The Bold and the Beautiful (B&B) spoilers tease that Ridge (Thorsten Kaye) will continue to have concerns about Eric’s (John McCook) love life. He’ll realize that Quinn (Rena Sofer) could easily put Eric back under her spell. Ridge will feel like he needs to protect his father from Quinn’s manipulation and overall insanity.

Steffy (Jacqueline MacInnes Wood) will also think Quinn could pose a serious threat. B&B fans know Steffy was furious when she got updates on Quinn and Eric’s romance. Steffy obviously doesn’t trust Wyatt (Darin Brooks) to keep his mother in line. Wyatt promised that he’d handle this, but Steffy has heard that before.

Since Wyatt has failed in the past, Steffy will think she needs to step up and stop the madness. She’s aware of the influence Quinn has on men. Steffy can’t risk letting her grandfather fall into Quinn’s trap again. The Bold and the Beautiful spoilers say Ridge and Steffy will meet to discuss their options.

Ridge will suggest that they need a plan to clean up the mess Eric has gotten himself in. Steffy will agree that they should keep Eric as far away from Quinn as possible. They’ll toss around some ideas and figure out how to calm the desires of these lovebirds. They’ll intend on driving Quinn and Eric apart.

The Bold and the Beautiful spoilers indicate that Steffy and Ridge will put their scheme into action soon. Unfortunately, their plot may hit an unexpected snag. Eric will call a Forrester family meeting so they can all talk about the recent mayhem. The fam will gather and things will undoubtedly get heated.

What will Eric reveal at this meeting? Will he open up about his feelings for Quinn? There’s a good chance Eric’s announcement will stir up extra conflict. He’ll likely declare that he’s resuming his relationship with the woman Steffy loathes.

There’s still some passion left for Quinn and Eric. B&B would be missing out on big drama if they stopped this here and now. By allowing Eric and Quinn to move forward as a couple, it will lead to additional strain for Steffy and Wyatt. She nearly left her hubby over the Monte Carlo disaster, but the catastrophes could keep right on coming.

Wyatt plans to cut Quinn out of his life, but that’s going to be ridiculously tough. He’s always had a special bond with Quinn. Wyatt will face difficulty as he tries to let go. You can bet that Quinn will fight Wyatt on this, but he’ll try to think of Steffy. He wants to put his wife before his mother for a change.

What happens if Quinn is involved with the Forrester clan anyway? If Quinn remains by Eric’s side, there’ll be no escaping her. Some other form of trouble will surely arise. Steffy may resent Wyatt for not controlling Quinn in the first place. She could feel like all of this is partially Wyatt’s fault.

That might be a little misguided, but maybe Wyatt deserves a just a hint of blame. He pressured Steffy into marrying him too quickly and they’ve certainly faced major problems as a result. Now Steffy is stuck with the world’s worst mother-in-law.

It sounds like more confrontations are on the way. We’ll keep you posted as other news becomes available. Stay tuned and don’t forget to check CDL often for the latest Bold and the Beautiful spoilers, updates and news.