‘The Bold and the Beautiful’ Spoilers: Ridge Hooks Up with Sasha as Caroline Drifts Toward Thomas? 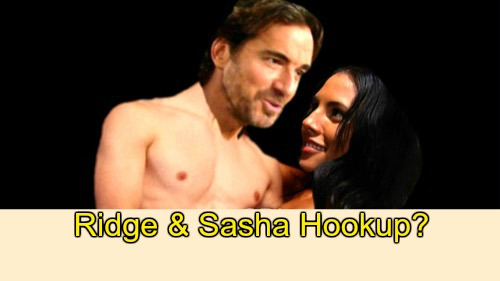 The Bold and the Beautiful (B&B) spoilers tease that Thomas (Pierson Fode) will continue to make power plays. He’s tired of Ridge (Thorsten Kaye) pushing him around. Thomas feels like he’s in charge now and he’ll make sure Ridge remembers that in the coming weeks.

Ridge isn’t going to like being bossed around by his son. He’s used to running the show, but he’ll have no choice but to back off. The Bold and the Beautiful spoilers reveal that Caroline (Linsey Godfrey) will try her best to keep the peace. She’ll attempt to serve as a mediator, but nothing can really stop the conflict.

B&B spoilers say Caroline will likely connect with Thomas as he spends more time with Douglas. She’ll appreciate Thomas’ softer side and that could cause a rift with Ridge. Ridge is already feeling threatened by Thomas and the role he wants to play in Douglas’ life. Ridge wants to be a dad to this baby, not a grandpa.

However, this secret is undoubtedly going to blow up before long. Once that happens, there’ll be no point in denying the truth. If Douglas is facing a life of scandal anyway, then Thomas might as well step up and claim his rightful place as his father.

If Ridge fights Thomas on this, Caroline could begin to drift from her husband. Perhaps Caroline will finally realize that she’s been bullied by Ridge, too. If Caroline decides that Thomas deserves the chance to raise Douglas, it could create serious problems in her marriage. Ridge may feel like his family is slipping away.

While Ridge battles the drama, he could seek comfort from a surprising source. Now that Nicole (Reign Edwards) and Zende (Rome Flynn) are back together, Sasha (Felisha Cooper) might need someone new to seduce. The Bold and the Beautiful viewers know that Sasha has Daddy issues, so she might be drawn to an older man if he shows her the love and attention she’s craving.

Could Ridge and Sasha end up having a fling? Ridge clearly likes youthful women. His love interests get younger and younger. Sasha and Ridge might choose to indulge in a torrid affair. They could both find themselves in need of this steamy escape.

Ridge would probably regret it afterwards, but Sasha would have the secret of a lifetime. She could blackmail Ridge and get anything she wanted. Of course, Caroline would inevitably find out the news in spite of any cover-up efforts.

If Ridge and Caroline are already facing difficulties by then, an affair with Sasha could be the kiss of death for his marriage. It might be the last push Caroline needs to fully reunite with Thomas. Will a hookup with Sasha be the final nail in the coffin?

It would definitely spice things up on the CBS soap. Stay tuned for updates on Ridge’s uncertain future.

So B&B fans, what do you think about the idea of Ridge and Sasha hooking up? Would it be gross, entertaining or both? Could you see this happening if Caroline starts leaning toward a Thomas reunion?