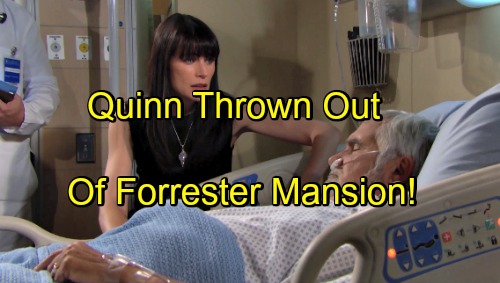 The Bold and the Beautiful (B&B) spoilers tease that Ridge (Thorsten Kaye) will take charge as Eric (John McCook) faces his health crisis. It’s clear that it’s Ridge’s way or the highway. He just can’t handle it when anyone else has control. Ridge intimidated many of his family members into betraying Eric. They weren’t sure about hurting Eric so deeply, but Ridge thought he knew what was best.

If Katie (Heather Tom) hadn’t intervened, Ridge would probably still be pretending that Douglas was his child. Once Thomas (Pierson Fode) learned the truth, Caroline (Linsey Godfrey) had to push Ridge to drop the public charade. Ridge can spin it any way wants, but his decision to divorce Caroline felt more like bitterness than a noble act of stepping aside.

The Bold and the Beautiful spoilers state that Ridge’s bullying and selfishness will continue. He’ll throw Quinn (Rena Sofer) out of mansion and refuse to allow her near Eric’s bedside. Ridge will declare that Quinn doesn’t deserve a spot in this family and he’s not going to give her one.

Now you might be wondering how Ridge can just step in and run the show. As Eric’s wife, shouldn’t Quinn have some rights? Ridge will take care of that pesky issue. He doesn’t plan on letting Quinn have any kind of say. As long as Eric is stuck in a hospital bed, Ridge will likely get by with his shadiness.

Carter (Lawrence Saint-Victor) will find out that Eric switched his medical proxy from Ridge to Quinn. When Ridge gets updates on this news, he’ll insist that Carter needs to keep his mouth shut. In other words, Eric’s wishes don’t matter. Ridge is convinced that his opinion is the only one that counts.

B&B spoilers indicate that Quinn will feel devastated and alone. Ridge will fight to keep Quinn out of the loop on Eric’s condition. He’ll think Quinn should go away and never come back. Will the family stand up to Ridge this time around? It would be nice if some of them would grow a backbone.

Of course, maybe Quinn could find her own moxie again. Quinn has managed to turn her life around, but she still has a scheming side. Perhaps Quinn could beat Ridge at his own game. Since Ridge seems to value the company over his father’s well-being, Quinn could make a power play. You never know what Quinn might have up her sleeve.

You can bet that Ridge will pay the price for his mistakes. When Eric eventually recovers, he’ll be furious with his son’s behavior. Ridge may get kicked out of family business. Carter’s job could be in jeopardy, too.

Nevertheless, Eric is a forgiving guy at heart. Plus, The Bold and the Beautiful centers on what happens at Forrester Creations. There’s a good chance everything could be resolved with some acceptance and groveling. Stay tuned to B&B and don’t forget to check CDL often for the latest Bold and the Beautiful spoilers, updates and news.

RT if you think @renasofer SLAYED this scene #BoldandBeautiful pic.twitter.com/LJF02i7s6v