‘The Bold and the Beautiful’ Spoilers: Sasha Convinces Thomas to Marry Her, Achieves Coveted Forrester Status Like Sister? 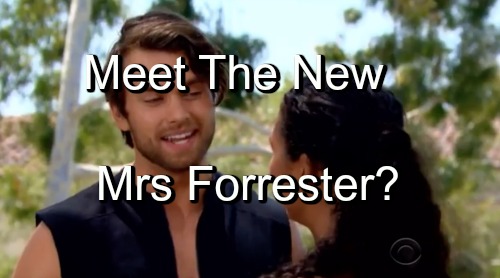 The Bold and the Beautiful (B&B) spoilers tease that Thomas (Pierson Fode) and Sasha (Felisha Cooper) will continue to fall for each other. Their friendship is quickly turning into love. Thomas came to Sasha’s rescue when Julius (Obba Babatunde) tried to treat her like a mistake. It obviously touched Sasha. The fact that Thomas is willing to listen makes him appealing as well.

Thomas seems interested in Sasha’s past and the struggles she’s endured. Of course, both of them have been flirting up a storm. They’re clearly sensing the spark, so that’s a plus. However, it’s tough to believe Sasha isn’t at least considering the Forrester factor right now. Thomas could be her ticket to bigger and better things.

Julius pointed out that Sasha didn’t belong in the same league as the Forrester clan. He suggested that Sasha wouldn’t get Zende (Rome Flynn) or any other man in the family. Julius feels like Sasha is beneath them. There’s undoubtedly a little piece of Sasha that would like to prove her father wrong.

Maya (Karla Mosley) is married to Rick (Jacob Young) and Nicole (Reign Edwards) hopes to marry Zende eventually. Sasha doesn’t want to be the only Avant daughter without a Forrester on her arm. If Sasha can win Thomas’ heart, she might think she’s finally made it. Sasha would feel a sense of victory and sweet satisfaction.

Sasha might try to beat Nicole to the altar. Thomas really wants to settle down with someone special. We also know that Thomas tends to be quite impulsive. As for Sasha, we’re not convinced she’s done scheming. Once a schemer, always a schemer! Just ask Quinn (Rena Sofer).

With that in mind, could Sasha push Thomas to marry her? Perhaps these two will grow closer and Sasha will start dropping hints. Thomas might just say, “Sure! Why not?” Then again, anything can happen if Sasha gets Thomas drunk enough. A quickie wedding would be easy to pull off.

The Bold and the Beautiful loves to rush nuptials and create complicated love triangles. Caroline (Linsey Godfrey) has been taken out of the picture so things can develop between Sasha and Thomas. This situation is going to get messy when Caroline returns to Los Angeles.

Thomas and Caroline share a child together, which means they’re going to stay connected. What if Caroline comes home to find that Douglas has a new stepmom? It could lead to a huge rift. A custody battle might even ensue.

That could tie in with another revelation that some Bold and the Beautiful viewers are hoping for. B&B tends to give us crazy twists occasionally. Could Ridge (Thorsten Kaye) be the “baby daddy” after all?

In the soap world, there’s no reason why Ridge can’t be the father. His doctor could’ve made a mistake or maybe Douglas is simply one of those unexplainable soap miracles. Regardless, a Sasha and Thomas marriage would be a good way to set up drama with Caroline. If Thomas demands time with Douglas, the father shocker could easily follow.

No matter what happens, Sasha is going to cause problems. We’ll give you updates as more news comes in. Stay tuned to B&B and don’t forget to check CDL often for the latest Bold and the Beautiful spoilers, updates and news.