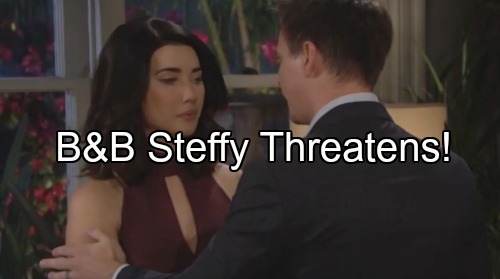 The Bold and the Beautiful (B&B) spoilers for Wednesday, August 17, tease that Steffy (Jacqueline MacInnes Wood) will rant about Wyatt’s (Darin Brooks) mother. Steffy will insist that she’s had it with Quinn (Rena Sofer). Her constant schemes are just too much to deal with.

B&B spoilers reveal that Steffy will plan on laying down the law. She simply can’t allow Quinn to manipulate Eric (John McCook) any longer. Steffy will make her intentions crystal clear to Wyatt. Wednesday’s preview video shows Steffy saying, “Her language is threats and I’m going to start speaking it if she doesn’t stay away from my grandfather.”

Of course, we know threats don’t really work either. Quinn does what she wants and there’s nothing anyone can do about it. Both Steffy and Wyatt should have figured that out by now.

Nevertheless, Wyatt will assure Steffy that he’ll put a stop to Quinn’s comeback at Forrester Creations. He’ll declare that Quinn is going to turn down that job offer and she’s going to end her involvement with Eric. Wyatt will believe he can put Quinn in her place.

The Bold and the Beautiful spoilers say Steffy will want to believe that, but she’ll obviously have doubts. Meanwhile, Ridge (Thorsten Kaye) will have concerns about Quinn’s hold on Eric. Ridge may not be able to save his father, but he’ll at least try to save the family business.

Ridge will meet with Katie (Heather Tom) and Brooke (Katherine Kelly Lang) to discuss how to proceed. He’s counting on Katie to get Bill’s (Don Diamont) shares in her divorce settlement. Ridge will explain that it’s more important than ever. They have to gain control of Forrester before Quinn does anything too crazy.

Ridge will also be outraged by the complications for Steffy. He’ll gripe that Eric just hired the one person who could single-handedly destroy Steffy’s marriage. Quinn won’t let Steffy live her life in peace. Ridge will fear that Quinn will only bring danger and heartache to the Forresters.

At the mansion, Eric won’t think Quinn is doing anything but making him happy. He’ll gush about how Quinn makes him feel. Eric is in a state of bliss and he has Quinn to thank for it. Quinn will mention Ridge’s disdain, but Eric will want her to forget about that. He’ll indicate that Ridge won’t be a problem. Eric will hope to enjoy their special night together.

In fact, Quinn might be extending her stay. The Bold and the Beautiful spoilers hint that a joyful duo will make some updates to their living arrangements. Since Eric and Quinn are basically the only content couple on B&B right now, that probably means he’ll ask her to move in.

This could lead to bad news for Steffy and the rest of the Forresters. How far will they go to break up Quinn and Eric’s relationship? Can Quinn manage to keep her spot as Eric’s leading lady? Keep watching and don’t forget to check CDL often for the latest Bold and the Beautiful spoilers, updates and news.