The Bold and the Beautiful (B&B) Spoilers: Sasha Pushed to Breaking Point – Reveals Family Destroying Secret During May Sweeps 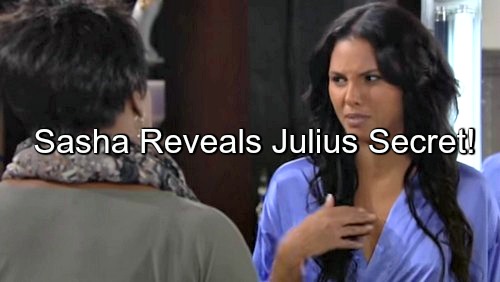 “The Bold and the Beautiful” (B&B) spoilers reveal that on next week’s episodes Nicole (Reign Edwards) will make a confession to Zende (Rome Flynn). Since Zende is the one who ended their relationship, he’s aware that Nicole is still in love with him. Zende loves Nicole as well, but the surrogacy has just been too much for him to handle.

Nicole will admit that she remains hopeful about a possible future together. She’ll believe everything will go back to normal once the baby is born. Nicole will suggest that they can do all the things Zende felt like they were missing out on.

Of course, we know everything isn’t quite as simple as that. Nicole is having a baby for Rick (Jacob Young) and Maya (Karla Mosley), but that doesn’t mean she won’t feel a connection with this little one. Nicole will be the child’s biological mother and that could change her life forever.

As for Zende, he’s fairly happy with Sasha (Felisha Cooper). There’s just one problem: Sasha isn’t Nicole. Zende is finding it difficult to move on from the woman he fell so hard for. Will Zende discourage Nicole’s dreams or satisfy her with a “maybe”? Time will tell, but there’s certainly a lingering spark between them.

Meanwhile, the tension will reach a boiling point for Sasha and Julius (Obba Babatunde). “The Bold and the Beautiful” spoilers say Sasha will once again try to reach out to her father. When Sasha gets snubbed, she’ll hit the roof.

Sasha will decide she’s had enough of Julius giving Nicole preferential treatment. It’s obvious that Julius has no intention of doting on his second-rate daughter. Sasha will be fed up with Julius’ constant disrespect. Will all of the rejection finally push Sasha too far? The Bold and the Beautiful spoilers predict that Sasha will reveal the secret that she is Nicole’s half-sister during May sweeps.

B&B viewers know that Sasha’s secret that could destroy Julius and Vivienne’s (Anna Maria Horsford) marriage. It would also turn Nicole’s world upside down. She’ll be stunned when she inevitably finds out Sasha is actually her sister. The whole family has been lied to for years.

Sasha would definitely like for everyone to know what kind of man Julius really is. The shocking truth could soon be exposed! Stick with “The Bold and the Beautiful” for updates on the Avants and the chaos they’re facing.

So B&B fans, what do you think about the news that Nicole will still believe she has a shot with Zende? How will Zende respond to Nicole’s ideas for their future? Will Julius push Sasha over the edge? Will she spill her secret in retaliation?