BY Heather Hughes on January 4, 2016 | Comments: one comment
Related : Soap Opera, Spoiler, Television, The Bold and the Beautiful 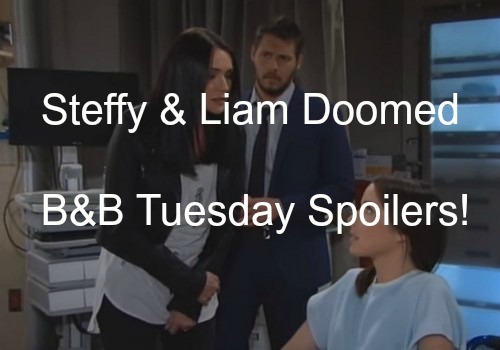 “The Bold and the Beautiful” spoilers for Tuesday, January 5, tease that Quinn (Rena Sofer) will make it clear that she’s still fed up with Ivy (Ashleigh Brewer). Quinn will suggest that she’s showing support at the hospital because she cares whether Ivy lives or dies.

However, that doesn’t mean Quinn is ready to forgive Ivy for the way she treated Wyatt (Darin Brooks).

When it comes to her son, Quinn is quite protective. She’s also extremely manipulative, which means B&B viewers can expect her to push Wyatt in Steffy’s (Jacqueline MacInnes Wood) direction. Luckily, this scheme is falling right into Quinn’s lap.

After Liam (Scott Clifton) learned Steffy was involved in Ivy’s latest accident, he declared that he was done. As a result, Steffy will be unsure about her future with Liam.

“The Bold and the Beautiful” spoilers reveal that Steffy will try to hold out hope for her relationship. Steffy will want to believe that everything is going to be fine, but she’ll be nervous deep down. Steffy will plan on working things out with Liam as soon as he gets home.

Unfortunately, Steffy’s ideas of reconciliation will get derailed by Ivy’s mission to get back to Australia ASAP.

Ivy will decide to go against medical advice and leave right away. Liam won’t think it’s a good move considering Ivy’s current condition, but she’ll be adamant that this is what’s best. Ivy joked that staying in Los Angeles is lowering her life expectancy, but it’s a fair point. Steffy can’t seem to handle Ivy being around and Ivy doesn’t want any more dangerous conflict.

Liam will insist on accompanying Ivy to the airport to help her get seated on the plane. That’s when the plan will go awry. Thanks to a blow to the head, Liam will end up unconscious during takeoff. Steffy isn’t going to be pleased when she hears that Liam is in Australia with Ivy.

It sounds like it’s going to be a tense week for this once happy couple. Stick with “The Bold and the Beautiful” for updates on what’s next for Steffy and Liam.

So B&B fans, what do you think about the news that Quinn will start plotting to get Steffy and Wyatt together? Will Wyatt manage to win Steffy over? Will Liam and Steffy’s romance survive what lies ahead?

The Bold and the Beautiful Video Promo for Tuesday, January 5