The Bold and the Beautiful (B&B) Spoilers: Steffy Stunned Liam Is in Australia – Begins Wyatt Romance on Rebound, Quinn Cheers! 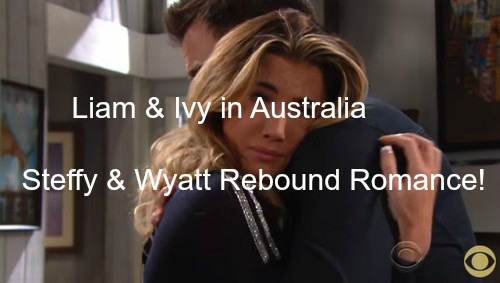 “The Bold and the Beautiful” spoilers reveal that Steffy (Jacqueline MacInnes Wood) will fear she’s gone too far this time. Liam (Scott Clifton) will be infuriated by Steffy’s recent behavior. After Ivy (Ashleigh Brewer) tripped and took a nosedive down the staircase, Steffy looked like a kid who got her hand caught in the cookie jar.

To be fair, Steffy didn’t shove Ivy or violate any restraining orders through their latest confrontation. Nevertheless, the heated encounter indirectly led to Ivy’s fall. It seems Ivy gets clumsy when she’s being berated by Steffy. Now Steffy will worry that Liam won’t forgive her for being involved in another one of Ivy’s accidents.

Once Ivy gets checked out at the hospital, she’ll have a weepy meltdown. “The Bold and the Beautiful” spoilers say Ivy will declare that she just wants to go back to Australia and forget about all of this. Ivy longs to be done with the Steffy drama and free from the pain of losing Liam.

Ivy’s doctors will advise her to take it easy, but she’ll insist on leaving Los Angeles right away. Since Wyatt (Darin Brooks) won’t want anything to do with Ivy, Liam will decide he should make sure Ivy is taken care of. Liam will purchase his own airline ticket so he can help Ivy get seated. He’ll plan on letting Ivy stretch out in the extra seat after he exits the plane.

Of course, B&B viewers know that things never go according to plan. When Ivy has a dizzy spell, Liam will dash off to the lavatory to get a wet towel for her head. Liam will end up taking a tumble as he runs.

After he falls and bumps his head, Liam will be knocked out cold. Once he awakens, the plane will already be in the air. Liam will be stunned to discover he’s headed to Australia whether he likes it or not!

Back in Los Angeles, Steffy won’t know where her fiancé is or what he’s doing. In fact, Steffy will wonder if she even has a fiancé anymore. This engagement is up in the air—just like Liam. Steffy will eventually receive news on Liam’s whereabouts, but it won’t do much to ease her mind.

When Steffy hears that Liam is in Australia with Ivy, she’ll turn to Wyatt for support. It sounds like this love quadrangle is about to get even more complex. Naturally Quinn (Rena Sofer) takes the opportunity to do everything she can to make Wyatt and Steffy a couple! Stick with “The Bold and the Beautiful” for updates on where they’ll go from here.

So B&B fans, what do you think about Liam’s gaffe and Steffy’s worries? Will this blunder lead to a breakup for Steffy and Liam? Is Wyatt about to make his big move?