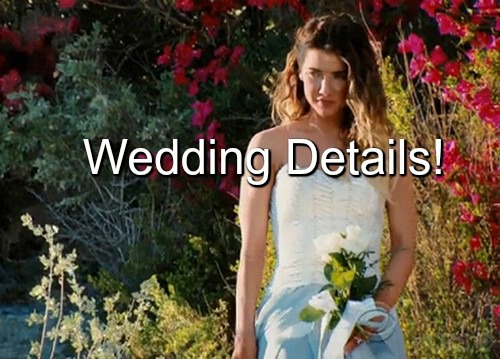 “The Bold and The Beautiful” (B&B) spoilers reveal on today’s episode we will see that the beach wedding of Wyatt Spencer (Darin Brooks) and Steffy Forrester (Jacqueline MacInnes Wood) is slated to go off without a hitch. But might CBS showrunners surprise us with a last minute twist? Check out these wedding tidbits!

Of course, Steffy went non-traditional with her wedding gown and choose an ivory bustier with a flowy gauzy pale blue skirt to blow in the ocean breeze as she and Wyatt say their vows on the sand. Wyatt is also in a hipster-ish suit of gray with darker piping that complements Steffy’s gown.

But before the wedding gets off the ground, The Bold and the Beautiful spoilers tease that we’ll see some touching family time between Caroline Spencer (Linsey Godfrey) and Steffy and between Ridge Forrester (Thorsten Kaye) and his daughter. And it looks like the Thomas Forrester (Pierson Fode) lie is weighing on both Caroline and Ridge.

As Caroline takes care of her maid of honor duties, she and Steffy talk about what a good man Wyatt is and how perfect she and Wyatt are together. But that won’t keep Steffy from having some last minute concerns about why they haven’t heard from Liam Spencer (Scott Clifton).

When Ridge chats up Steffy, it seems like he doesn’t have many words of encouragement. After all, it was just yesterday that Ridge nastily brought up Hope Logan (Kim Matula) in front of Wyatt and Steffy. However, Steffy seems confident and doesn’t need a pep talk from her dad.

Wyatt gets a talking to from his mom Quinn Fuller (Rena Sofer) who is certain Steffy is the girl for him – but she’s thought that about different women before – plus Quinn is flat out crazy. How will she explain leaving the house in her fancy duds to boy toy “Adam”?

When Wyatt sees how beautiful Steffy is, he’ll be struck dumb as he stands at the altar. Wyatt is certain they are meant for each other, although he too has nagging concerns about where his brother has disappeared to – but they can address those after the wedding.

And, of course, guest star Chaz Bono officiates the wedding as Reverend Rydell (you can see a sneak peek of him in the promos for the wedding). But the big questions looming are whether anything will interrupt the ceremony.

B&B spoilers indicate that Wyatt and Steffy will be officially man and wife by the end of the week, but let’s hope there’s at least a little drama at their wedding. If Katie Spencer (Heather Tom) hits the bottle before the beach, we might see her embarrassing hubby Bill Spencer (Don Diamont).

B&B fans hope that Deacon Sharpe (Sean Kanan) is still alive – it would be great if he showed up at the wedding and sat next to Quinn to shock her that he survived her murderous cliff shove. Liam, though, will not make an appearance – but it looks like he will have a breakthrough.

While Wyatt and Steffy are saying their vows, Liam will be busy sketching the face of the woman he can’t forget and looks like we’ll see he’s drawn Steffy at about the same time his brother Wyatt puts a ring on it. Even if there’s no drama at the ceremony, there will be shortly.

B&B spoilers indicate that Liam will be found by Wyatt within few days after the wedding – at Quinn’s cabin – and Wyatt will help his brother recover all his memories. But how awkward will it be when he has to tell Liam that while his mother held him captive at the cabin, he stole Liam’s girl and his job?

What do you think B&B fans? Are you excited to see Wyatt and Steffy’s wedding kick off today? How long do you think their wedding will last once Liam is back? Will Steffy stick with Wyatt since she and Liam had problems even before he went away?