‘The Bold and the Beautiful’ Spoilers: Steffy Asks About Eric’s Mystery Woman – Quinn Winds Up in Monte Carlo 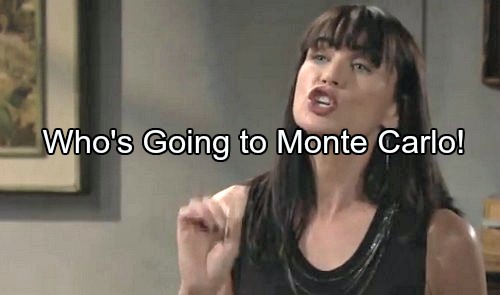 The Bold and the Beautiful (B&B) spoilers for Friday, July 15, tease that Quinn (Rena Sofer) will defend her romance with Eric (John McCook). She’ll claim Eric fulfills her because he’s a kind man who treats her with respect. Quinn will hint that Eric doesn’t act like she’s “one of his little playthings.”

Quinn is probably implying that Deacon (Sean Kanan) falls into that plaything category. In reality, Deacon seems to truly care about Quinn. Nevertheless, Quinn is too focused on her plot to even notice. She intends on being accepted by the Forrester clan and she won’t stop until she gets what she wants.

Meanwhile, The Bold and the Beautiful spoilers reveal that Eric will have a sweet chat with Steffy (Jacqueline MacInnes Wood). He’ll point out that he’s proud of Steffy and everything she’s accomplished. Eric will add that Stephanie (Susan Flannery) would be proud, too. Steffy will notice that Eric is acting particularly chipper. She’ll wonder if there’s a new woman in his life.

Eric is trying to keep his relationship with Quinn on the down low. He knows it would cause a riot within the Forrester family. When Eric sidesteps Steffy’s questions, she’ll indicate that she doesn’t want to be pushy. Steffy will suggest that she’s just happy Eric has found someone who brings him joy. 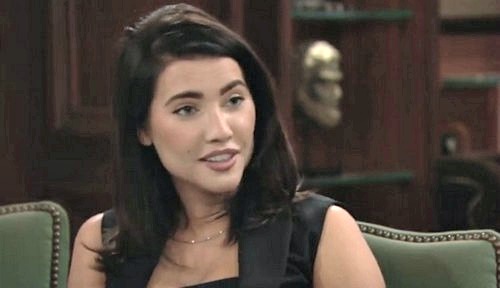 Of course, Steffy wouldn’t say that if she knew the identity of Eric’s mystery lady. Wyatt (Darin Brooks) wouldn’t be pleased either. He’s told Quinn repeatedly to steer clear of the Forresters. Wyatt doesn’t want Quinn involved with Steffy’s relatives in any way, shape or form.

At Spencer Publications, Wyatt will stand up for Quinn. It looks like Liam (Scott Clifton) may mention that Steffy is worried about her mother-in-law. Wyatt will insist that Quinn wants his marriage to last. He’ll refuse to believe that Quinn would do anything to screw it up.

Bill (Don Diamont) will give Wyatt and Liam big news Friday’s B&B episode. The Bold and the Beautiful spoilers say Bill will extend an invitation to his sons. He’ll ask them to attend the Spencer Summit in Monte Carlo. Steffy will be invited as well, so there’s sure to be some good drama.

It’s obvious that Steffy is still feeling drawn to Liam. In fact, they’ll find themselves connecting before they even head off on their trip. This brief retreat could spell trouble for Steffy and Wyatt’s marriage. The closer Steffy gets to Liam, the further she’ll drift from her hubby.

Quinn and Eric will also pop up for some Monte Carlo scenes. We’ve seen Quinn cause plenty of problems at exotic locales in the past. There’s no reason to think Quinn won’t do the same thing this time.

Bottom line, it’s best to expect chaos when Quinn is around. Eric has no idea what he signed on for! We’ll give you updates on all of the excitement ahead. Stay tuned to B&B and don’t forget to check CDL often for the latest Bold and the Beautiful spoilers, updates and news.