The Bold and the Beautiful (B&B) Spoilers: Steffy Certain Liam Dumped Her for Ivy – Sleeps With Wyatt for Comfort? 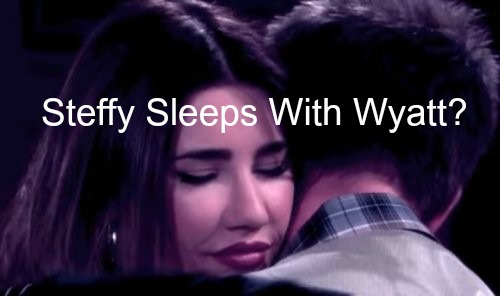 “The Bold and The Beautiful” (B&B) spoilers tease that Steffy Forrester (Jacqueline MacInnes Wood) is about to make an even bigger mistake in her relationship with Liam Spencer (Scott Clifton) that could break them up for good.

This all starts because Liam is a poor communicator. Let’s face it – he told Ivy Forrester (Ashleigh Brewer) that he loved her when he really meant that he loved what they had at one point but is totally over her now.

Then after Ivy had yet another accident, Liam told Steffy that he’s “done.” What he meant was done with her not listening to him and going agro confronting people. He didn’t mean done with their relationship or engagement.

But it sure sounded like he meant they were through – that’s pretty much what “done” means. This will turn into a farce soon as Ivy decides to check herself out of the hospital and get on her flight to Australia. Who does that with a possible concussion after a fall down a flight of stairs?

Liam is sticking around the hospital with Ivy – because that’s what you do with a woman you just told to forget about you – and decides to give her a lift to the airport. That part is smart – making sure Ivy leaves town is a solid idea.

But when Ivy has a dizzy spell, Liam decides to buy a ticket so he can escort her onto the plane. That’s a $3,000 gesture, but since he’s a Forrester, money is no object. Then, as B&B spoilers indicate, Liam hits his head in the airplane bathroom, gets knocked out and poof – he’s on his way to Australia.

Meanwhile back in LA, events will unfold that Liam set in motion with his poor choice of words. Steffy is pacing the floor at their place, staring at the time, wondering if Liam has left her. Then she’ll call the office to check on him and no doubt hear that he went to the airport with Ivy.

Steffy will likely also find out – one way or another – that he bought a ticket on the flight. For Steffy, Liam telling her he’s done and leaving for Australia with Ivy means their engagement is done. As she realizes this, Wyatt Spencer (Darin Brooks) will show up.

Quinn Fuller (Rena Sofer) has Wyatt all hopped up on the idea that Ivy was not worthy of him and that Steffy is much more his type. Wyatt stops by to check on Steffy, at his mom’s insistence, and will find a devastated Steffy who thinks Liam chose Ivy.

This makes sense to Wyatt since he knows that Ivy was working towards that goal, but he’ll still be hurt. Wyatt and Steffy will comfort each other but how far will that comforting go? Will it end in a kiss? An embrace? Or in bed?

Steffy’s mode is to always use her body, so there’s a good chance they could end up naked. Of course, Liam is clueless that he’s left this impression – heck, he’s even clueless he left the country. When he recovers and calls home, Steffy will know she made a mistake.

But will Wyatt press her for more? Will Steffy insist that whatever they did stay secret? That would be pretty hypocritical considering that Steffy couldn’t wait to tell Wyatt what Ivy was secretly doing with Thomas Forrester (Pierson Fode).

But would Wyatt keep it a secret from his brother that he kissed and/or got naked with his fiancée? Wyatt might see that Liam deserves this because he took Hope from him and ruined his relationship with Ivy. Even if Wyatt doesn’t want Steffy, what he will want is to give Liam a taste of his own medicine.

This could be explosive between the brothers and once Ivy hears, she’ll be convinced that Steffy is the worst person on the face of the planet. Meanwhile Quinn will be cheering from the sidelines because she wants Steffy with Wyatt but more so, wants to see Liam eat crow.

What do you think B&B fans, how far will Steffy and Wyatt go? Does Liam deserve them coupling up for stringing Ivy along and telling Steffy that he’s done? Share your thoughts in the comments below and check back with CDL often for more “The Bold and The Beautiful” spoilers and news.