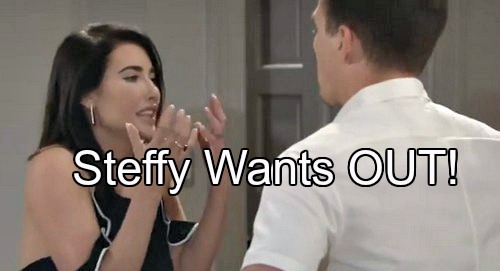 The Bold and the Beautiful (B&B) spoilers for Wednesday, August 3, tease that Wyatt (Darin Brooks) will try to wrap his head around Quinn’s (Rena Sofer) admission. He’ll be stunned by the fact that Quinn and Eric (John McCook) are involved. Naturally, Wyatt will assume the worst. He’ll think this was another twisted scheme.

Quinn will contend that Eric is lonely and wants companionship. She’ll add that she wanted that, too. Quinn had a hard time letting Liam (Scott Clifton) go, but she finally found someone new to love. She’ll feel like the best part is that Eric loves her back.

Wyatt won’t understand why Quinn had to hook up with Steffy’s (Jacqueline MacInnes Wood) grandfather. The Bold and the Beautiful spoilers say Wyatt will insist that his marriage may be in serious trouble. If Quinn continues to see Eric, Wyatt could lose his wife.

Meanwhile, Steffy will want Eric to see the light. Eric will suggest that he’s found something special in Quinn and he’d like to see where it goes. Steffy simply won’t accept that. She’ll shout that she’s not going to allow Eric to have a relationship with “that woman.”

Once Steffy has finished ranting at Eric, it’ll be Wyatt’s turn to get a piece of her mind. The Bold and the Beautiful spoilers indicate that Steffy will erupt over Quinn’s latest mess. B&B’s preview video shows Steffy yelling, “I’m not doing this anymore! I am not living under this threat of Quinn!”

Steffy will state that she didn’t sign up for this when she married Wyatt. It appears Quinn may have gone one step too far. Wyatt will try to calm Steffy down and assure her that they can get through this.

Steffy will probably wonder about the next nightmare and the one after that. With Quinn as a mother-in-law, Steffy is in for a life filled with ordeals like this. There will be no end to the drama. Steffy will have to consider her options and determine if Wyatt is really worth it.

Other B&B spoilers reveal that Brooke (Katherine Kelly Lang) and Ridge (Thorsten Kaye) will spend some time talking about Stephanie (Susan Flannery). They’ll likely recall all of her good qualities and reminisce about pleasant memories. Of course, their warm fuzzies should vanish once they get updates on Eric’s new leading lady.

Everyone knows Quinn is a troublemaker. When the news of Eric’s fling starts spreading, the Forresters are going to have a big problem with it. Quinn has done some crazy things over the years. Ridge may be outraged that he was knocked out of the CEO spot because of Douglas’ paternity. After all, Eric knew he had a scandal of his own brewing.

How would the press react if they learned some of the juicy details? Regardless, Ridge isn’t going to be pleased with how much distress Steffy is in. Eric will undoubtedly have to provide an explanation for his behavior.

It sounds like this family will face a major crisis. We’ll keep you posted as more info emerges. Stay tuned and don’t forget to check CDL often for the latest Bold and the Beautiful spoilers, updates and news.