The Bold and the Beautiful (B&B) Spoilers: Steffy Stunned as Wyatt Proposes Marriage – Does She Accept? 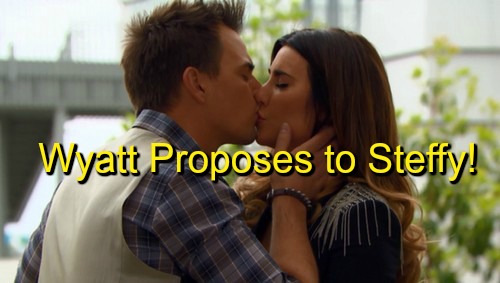 “The Bold and the Beautiful” spoilers tease that another proposal is in the works. It seems like we’ve seen a lot of those lately. Liam (Scott Clifton) proposed to Steffy (Jacqueline MacInnes Wood), but their engagement is currently off. Wyatt also nearly popped the question to Ivy (Ashleigh Brewer), but that didn’t pan out thanks to her feelings for Liam.

Wyatt griped at Ivy for being hung up on his brother, but he sure moved on quickly. It’s obvious that Ivy was simply a stand-in as well. Now Wyatt is enamored with Steffy and he’s been free to make his move thanks to Quinn (Rena Sofer). As Wyatt grows closer to his new love, he’ll decide to speed up their romance.

“The Bold and the Beautiful” spoilers say Wyatt will propose to Steffy. Either Wyatt is desperate to have a wife or Steffy is just the wife he wanted all along. It’s awfully soon for Wyatt to get down on one knee. They haven’t even really defined their relationship yet. Wyatt claimed he wanted to take his time, but it appears Quinn’s not-so-subtle nudges are getting to him.

Of course, we don’t know if Steffy will accept this shocking proposal. Wyatt has been helpful to Steffy as she continues to struggle with her sorrow. However, there’s no denying that Steffy is still in love with Liam. Wyatt couldn’t handle being with Ivy because of that, but he’s choosing a woman with the same problem.

In other words, Wyatt is setting himself up for more heartbreak. At this point, Wyatt has no one to blame but himself. B&B spoilers indicate that the truth about Quinn’s actions will be revealed. Steffy will eventually hear from Liam and she’ll get updates on why he was out of the picture.

Will Steffy want Liam back in her life or is Wyatt already starting to win her heart? Time will tell, but it sounds like things are about to get interesting. Stick with “The Bold and the Beautiful” to see which man Steffy will end up with.

So B&B fans, what do you think about the news that Wyatt will propose to Steffy? Is it way too soon to pop the question? Will Steffy accept or decline Wyatt’s offer of marriage?

What will happen once Steffy hears from Liam? Voice your opinion in the comments below and don’t forget to check CDL often for the latest “Bold and the Beautiful” spoilers, updates and news.