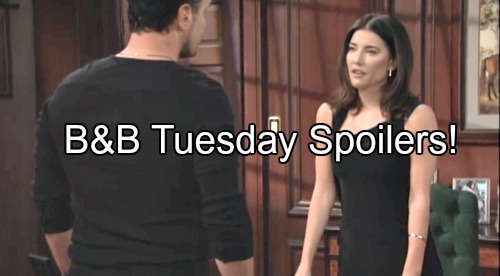 The Bold and the Beautiful (B&B) spoilers for Tuesday, June 21, reveal that Bill (Don Diamont) will drop by Forrester Creations to have a chat with Steffy (Jacqueline MacInnes Wood). She won’t be happy to see him. Steffy will tell Bill that he can try to make an appointment with Pam (Alley Mills), but she won’t give him one.

Steffy will contend that Bill has made his point and now he needs to butt out.

Nevertheless, Bill will likely remind Steffy of the commitment she made to Wyatt (Darin Brooks). He’ll believe it’s not Liam’s (Scott Clifton) place to intervene. Steffy will be annoyed by Bill’s attitude. The Bold and the Beautiful spoilers say Steffy will urge Bill to stop playing favorites with his sons.

That’s definitely a bad habit of Bill’s, but normally Liam is the one getting the preferential treatment. Perhaps it’s Wyatt’s turn to have someone in his corner. Regardless, Bill will remain firmly on “Team Wyatt” for the time being.

Elsewhere, Liam will wonder if he should begin to accept the situation. He’s not quite ready to completely back off, but he’ll at least consider the idea. Liam will suggest that maybe marriage is truly worthy of respect. Bill’s relationship with Katie (Heather Tom) has made Liam question his pursuit of Steffy.

He sees Bill as a man of integrity and he wants to live up to that.

Of course, we know that Bill is actually cheating on Katie behind her back. He’s in love with Brooke (Katherine Kelly Lang) and he’d like to start a new life with her. Bill would dump Katie for his longtime lover in a heartbeat. Brooke can’t get on board with that plan yet, but Bill will present some alternatives.

He’ll hope that he can find a way to build some form of a future with Brooke.

Other Bold and the Beautiful spoilers tease that Nicole (Reign Edwards) will have some doubts about her recent move. B&B viewers watched Nicole ask Zende (Rome Flynn) to give up his latest gig. She didn’t want Sasha (Felisha Cooper) flaunting her body while Zende took photos. It could only lead to bad news.

Vivienne (Anna Maria Horsford) will maintain that it was the right call. Nicole obviously can’t trust Sasha. However, Nicole will worry that she should have more faith in Zende. Vivienne will advise Nicole to be careful. She’ll fear that Zende’s morals will be no match for Sasha’s schemes.

Julius (Obba Babatunde) cheated on Vivienne, so she’s undoubtedly concerned about Nicole handing out opportunities for infidelity. Meanwhile, Sasha will talk to Zende about all of the chances he gave her. She’ll be grateful for the good things Zende brought to her life. Sasha will insist that she wants to repay the favor.

Since Sasha already admitted that she’d like to have Zende back, trouble could be brewing. Will the temptation prove too strong for Zende? We’ll have to wait and see, but B&B spoilers say the battle for Zende’s heart is far from over. We’ll give you updates as this storyline develops.