‘The Bold and the Beautiful’ Spoilers: Liam’s Desperate Plea, Steffy Shuts Him Down – Wyatt and Liam’s Tension Explodes 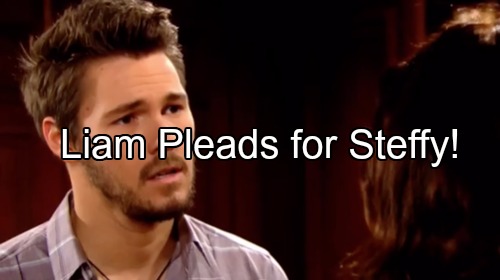 The Bold and the Beautiful (B&B) spoilers tease that Liam (Scott Clifton) just won’t be willing to give up on Steffy (Jacqueline MacInnes Wood). Bill (Don Diamont) has repeatedly warned Liam to back off, but it’s not that easy. Liam believes Quinn (Rena Sofer) cheated him out of a future with the woman he loves.

As for Wyatt (Darin Brooks), Liam probably doesn’t feel too bad for him. Wyatt certainly wasted no time in making his move while Liam was gone. He had no business pushing Steffy to get married so quickly. If Wyatt really loved and respected Steffy, he should’ve allowed her to process Liam’s sudden exit from her life.

Nevertheless, what’s done is done. Wyatt and Steffy are married, which leaves Liam as the odd man out. The Bold and the Beautiful spoilers say Liam will hope to rectify that. He’ll approach Steffy with one more passionate plea. Perhaps Liam feels like he hasn’t truly been articulating the depths of his love.

Liam will try to help Steffy understand that she won’t be happy with Wyatt. She’ll be doomed to a life of mediocre romance. Steffy will always have to wonder what would’ve happened if she’d just taken this leap. Unfortunately, Liam’s latest heartfelt speech won’t change anything.

This conversation will end in defeat just like the ones before it. 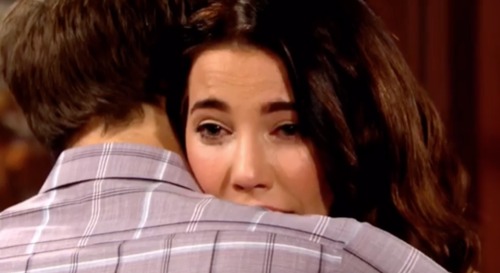 Steffy will indicate that she thought Liam had given up on their relationship. She’s with Wyatt now and she won’t disregard her commitment. To make matters worse, it looks like we’ll see more tension between Wyatt and Liam. That’s certainly not going to help Liam win Steffy over.

She’s already emotionally exhausted from all of the conflict.

The Bold and the Beautiful spoilers reveal that Wyatt and Liam’s battle will carry over to the workplace. They’ll have a shouting match at the office as their anger reaches an all-time high. Wyatt claims that he feels secure in his marriage, but it’s doubtful that it’s true. Anyone would worry in a situation like this.

When your wife is being pursued by her ex, it can lead to bad news.

Liam and Wyatt have always had their fair share of difficulties, but this really takes the cake. Will they ever be able to move past their affection for the same woman? It’s tough to say. They might be able to make peace if Liam finds someone else to love, but there will probably always be a little resentment.

Whatever happens, there’s a good chance Liam will end up back with Steffy eventually. B&B has set Steffy and Liam up the couple to root for, so something will likely prompt their reunion down the road. Liam may fill the void with another woman in the meantime or he may choose to sulk alone.

Either way, Steffy might make some updates to her view sooner or later.

B&B fans are divided on Steffy’s perfect match. Are you hoping Steffy and Liam will find their way back to each other? Should Steffy stick with Wyatt instead? Voice your opinion in the comments below and don’t forget to check CDL often for the latest Bold and the Beautiful spoilers, updates and news.