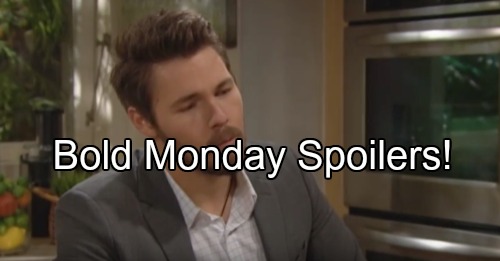 The Bold and the Beautiful (B&B) spoilers for Monday, June 20, tease that Vivienne (Anna Maria Horsford) will have a chat with Nicole (Reign Edwards). She’ll insist that Nicole was right to intervene when Sasha (Felisha Cooper) was offered that promotion.

If Sasha starts prancing around in lingerie, it could lead to trouble. It’s best for Sasha to steer clear of Zende (Rome Flynn) as much as possible.

Elsewhere, Sasha and Zende will continue their debate over who should back out of this opportunity. The Bold and the Beautiful spoilers say Sasha will believe Zende should be the photographer for this line.

She’ll think Zende deserves the chance and she’ll hate to be the one who knocks him out of it.

Later, talk will turn to Sasha’s faked pregnancy. She’ll admit that she made a mistake. It’s one that Sasha wishes she could take back every day. Zende seems like a pretty gullible guy to be honest.

He could easily fall for Sasha again if she shows she’s trying to be a loving, supportive person.

Of course, maybe Sasha has truly changed. It’s going to be a long time before we can judge the shifts in Sasha’s personality. Meanwhile, Steffy (Jacqueline MacInnes Wood) will definitely notice a change in the tension level for Thomas (Pierson Fode) and Ridge (Thorsten Kaye).

She’ll confront them about it and demand to know what’s going on.

It appears Rick (Jacob Young) will hear about Ridge and Thomas’ escalating feud as well. He’ll think they must be hiding something big. This could be the break Rick has been waiting for.

B&B viewers can expect Rick to begin digging around. In fact, Katie (Heather Tom) may help Rick in his efforts to get to the bottom of things.

Across town, Liam (Scott Clifton) will have a few questions for Bill (Don Diamont). After Liam found an earring in Bill’s hidden room, suspicions started to swirl. Bill has been urging Liam to respect the boundaries of Wyatt’s (Darin Brooks) marriage.

He’s adamant that Liam needs to drop his ideas of reuniting with Steffy and just let her be happy with her husband.

Liam reluctantly agreed that he’d honor Bill’s wishes because of his commitment to Katie. It seems Liam has put Bill’s relationship on a pedestal, but it’s probably going to come crashing down.

Monday’s preview shows an annoyed Liam asking, “So if you were alone, why did I find a woman’s earring on the bed?” Oops! The plans for a secret affair aren’t really panning out. Bill is already getting busted.

Since we know Bill is a smooth talker, he may try to lie his way out of this. He might suggest that his assistant had a romp in there or that Katie lost it at an earlier date. Both of those claims could easily be checked out by Liam, so Bill had better be careful.

Then again, Bill might just play dumb and say he doesn’t know. He could act outraged that someone was using his love nest without permission. Regardless, Bill needs to think fast. Liam will want some answers about his behavior.

Stick with The Bold and the Beautiful for updates on Bill’s explanation.

So B&B fans, what do you think about the news that Sasha is trying to play nice? Does she mean it? Will Steffy and Rick get any startling info? Will Bill manage to put out the sudden fire?