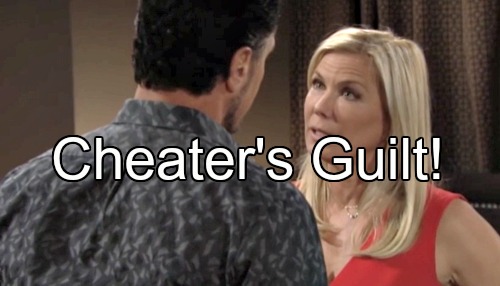 Steffy is also growing tired of the endless conflict.

Liam is trying to back off, but it looks like he still needs to clear the air with Bill. B&B spoilers say Bill’s assistant will maintain that he’s not to be disturbed. She’s under strict orders to keep everyone away.

Of course, we know that’s because Bill and Brooke (Katherine Kelly Lang) are trying to have a sexy rendezvous.

Brooke nearly caved, but her fears about Katie (Heather Tom) prompted more hesitation. Bill will likely repeat his threat to leave Katie if Brooke won’t agree to have an affair. Brooke will argue that it’s not a good solution. She’ll believe they’ll just be pretending if they keep this up.

Bill probably won’t care. He wants Brooke any way he can get her. Bill will insist that this simply has to happen.

Later, Brooke will get highly uncomfortable as Katie offers her gratitude. The Bold and the Beautiful spoilers say Katie will point out that Brooke has been loyal and supportive. She’ll vow to return the favor from now on. Brooke’s heart will sink as her sister remains positive about her marriage.

In reality, Bill and Katie’s relationship is falling apart. 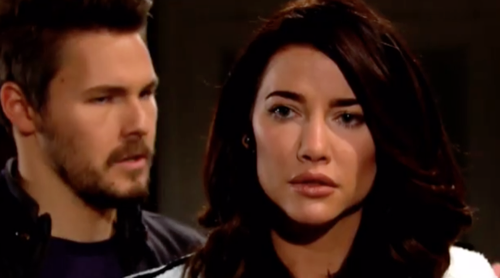 Back with Liam, he’ll eventually catch up with his father. Bill will remind Liam that they already settled this. He’ll state that Liam needs to respect the fact that Wyatt and Steffy are married. Liam was waging a war for Steffy’s heart.

Now he’ll have to focus on the battle to let it go.

Meanwhile, B&B spoilers reveal that Steffy will chat with Ridge (Thorsten Kaye) about her love life. Steffy will give Ridge updates on the latest developments and he’ll weigh in with his thoughts.

Bill is clearly on “Team Wyatt,” but Ridge may have a different opinion. He’ll certainly want what’s best for Steffy. It’s up to her to make sense of all this.

Will Steffy stick with the plan to make this marriage work? She might stay on this route for now, but she definitely isn’t over Liam. The Bold and the Beautiful has some twists in store and they could change the game.

You can bet that Steffy won’t be with Wyatt forever. That’s just not how love works on a daytime drama.

Keep watching the CBS soap to see what the future holds for Steffy.

So B&B fans, what do you think about the news that Brooke will worry about hurting Katie? Will Brooke choose her own happiness over her sister’s? Will Liam really be able to respect Wyatt and Steffy’s marriage?

Will Ridge give Steffy helpful guidance? Voice your opinion in the comments below and don’t forget to check CDL often for the latest “Bold and the Beautiful” spoilers, updates and news.