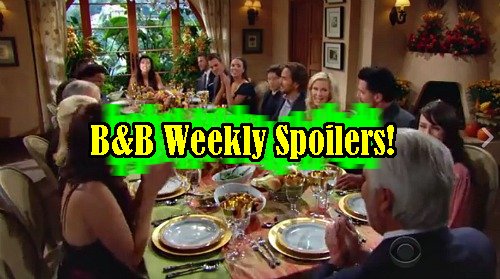 New The Bold and The Beautiful (B&B) spoilers for episodes the week of Monday, November 21 thru Friday, November 25 reveal a massive Thanksgiving get-together, Steffy shocks her grandpa Eric, Ridge stuns Brooke by getting on one knee, and Bill tells Ridge to back off.

Ridge Forrester (Thorsten Kaye) showed Brooke Logan (Katherine Lang) his mom Stephanie’s ring on Friday but next week he makes it official with a real marriage proposal. It seems like Brooke is trying to have her cake and eat it too as we head into the holiday week.

Brooke is shocked but would she really accept the ring and be involved in two engagements at once? This happens just as RJ Forrester (Anthony Turpel) has finally softened up on his mom marrying Bill Spencer (Don Diamont). Liam Spencer (Scott Clifton) helped change his mind.

Brooke gets very emotional about the proposal and isn’t sure what to do. Meanwhile, Quinn Fuller (Rena Sofer) tells Katie Logan (Heather Tom) to find a new house because she can’t move in next door. Will Katie run to Eric Forrester (John McCook) to blab? You bet!

Amy the realtor is back one last time as Katie renders her decision on whether to cave to Quinn’s demands or take the house of her dreams. If you didn’t know, Amy is played by Don Diamont’s wife Cindy Ambuehl.

Zende Forrester (Rome Flynn) wants Nicole Avant (Reign Edwards) to forgive him and makes a big gesture to try to get her to look kindly on him again. On Wednesday, Thanksgiving insanity takes over as all of the families decide on one massive get-together.

Katie, Pam Douglas (Alley Mills) and Charlie Webber (Dick Christie) man the kitchen, but it looks like the turkey is smoking and not in a good way. Will the dinner be a wreck? Steffy Forrester (Jacqueline Wood) backs off her hatred of Quinn and makes nice with her grandpa Eric.

Steffy tells Eric that everything she did was in what she thought was his best interests and she sees how she hurt him. Those two wind up in a hug even though Ridge doesn’t like losing his ally in the battle against Quinn’s takeover of his dad’s life.

As Thanksgiving dinner takes place, Eric is caught between Quinn and Katie, Brooke is seated between Bill and Ridge, and Ivy Forrester (Ashleigh Brewer) is seated with RJ and Wyatt Spencer (Darin Brooks). Maya Avant (Karla Mosley) and Rick Forrester (Jacob Young) are all there and it’s all drama.

Bill corners Ridge and tells him to knock it off with wooing is fiancée Brooke, but Ridge won’t back down and tells him that he and “his Logan” always find their way back to each other. Whose ring will Brooke keep and who will she crush?

RJ asked Bill for a promise to make his mom happy if she decides to marry him and Bill made a vow but once RJ knows his dad proposed to his mom, who knows where this will go. Remember there are three days of B&B this week and then no show on Thursday or Friday.

Share your comments below on these spoilers for the B&B episodes the week of Monday, November 21 thru Friday, November 25 and be sure to check back with CDL often for the latest The Bold and The Beautiful spoilers and news.