‘The Bold and the Beautiful’ Spoilers: Will Quinn and Eric Get Married – Summer Fling or Something More? 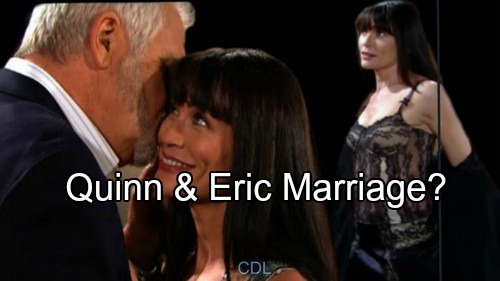 The Bold and the Beautiful (B&B) spoilers tease that Quinn’s (Rena Sofer) twisted brain is up to something. She’s had a plan for Eric (John McCook) from day one, but her scheme could be evolving. That’s usually how Quinn rolls. Just look at what happened with Liam (Scott Clifton).

Quinn kidnapped Liam and stashed him at the cabin to keep him away from Steffy (Jacqueline MacInnes Wood). She wanted Wyatt (Darin Brooks) to have a fair shot at winning Steffy over. Of course, Quinn’s plot eventually morphed into something else. She became determined to preserve the life she’d created with “Adam.”

Now Quinn has a new plan in mind. She’s done with Liam and Eric is her next victim. Quinn wants to gain acceptance into the Forrester clan and she feels like she’s already making progress. The Bold and the Beautiful spoilers say Quinn will take some major risks as she tries to achieve her goal.

Quinn’s scheme will most likely blow up in her face like it always does. However, that doesn’t necessarily mean she’ll have to write this off as a total failure. It’s doubtful that Steffy will ever warm up to her mother-in-law, but Quinn could still find true and meaningful love.

Once Eric and Quinn’s romance is exposed, will he be willing to stand by her? Unlike the situation with Liam, Eric entered this relationship willingly. He hasn’t been dragged away from his life or kept from the woman he really wants.

Eric might start to view Quinn as another chance at happiness. He may decide that he’s willing to overlook Quinn’s faults and her shady past. Could Quinn talk Eric into marrying her? Just imagine Quinn’s portrait hanging in the Forrester mansion!

It might create some intriguing storyline opportunities if Quinn and Eric stay together for a while. Then again, B&B may be keeping Deacon (Sean Kanan) around for a reason. He keeps popping up and trying to convince Quinn that she’s crazy to pursue a romance with Eric.

It’s clear that Deacon still cares about Quinn. Will Deacon be the one who bails Quinn out of whatever jam she ends up in? Perhaps Quinn’s relationship with Eric will simply be a summer fling.

No one seems to know how to handle Quinn quite like Deacon. She’s a ticking time bomb, but Deacon tends to defuse her or at least control the damage. Many Bold and the Beautiful fans would like to see Quinn and Deacon find their way back to each other sooner or later.

Bottom line, Quinn’s unpredictable behavior always throws her love interests for a loop. B&B spoilers suggest that we’re in for a bumpy ride over the next couple of months. The only thing we can count on is that Quinn will be entertaining.

Is Quinn’s relationship with Eric a summer fling or something more? Will Quinn succeed in making Eric her husband or is a reunion with Deacon in the works? We’ll give you updates as more news emerges.