BY Heather Hughes on May 20, 2016 | Comments: 5 comments
Related : Soap Opera, Spoiler, Television, The Bold and the Beautiful 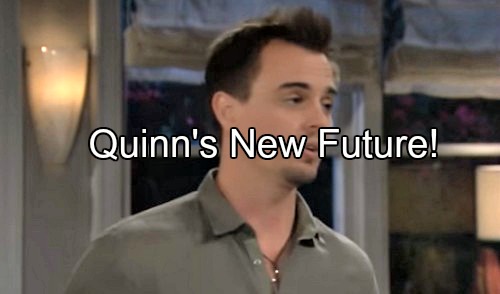 “The Bold and the Beautiful” (B&B) spoilers tease that Wyatt (Darin Brooks) and Bill (Don Diamont) will argue about Quinn (Rena Sofer) in next week’s episodes. B&B viewers know that Bill would love to see Quinn rotting in a cell. He thinks Quinn deserves whatever punishment she gets.

If you’d asked Wyatt how he felt when he first found Liam (Scott Clifton), he probably would’ve said the same thing. However, Wyatt has had some time to cool off and he’s starting to feel bad for his mother. He’s beginning to think prison may not be the best place for Quinn.

“The Bold and the Beautiful” spoilers say Wyatt will believe Quinn should have a chance to get better. He’ll point out that Quinn is obviously off her rocker. Wyatt will suggest that Quinn needs psychiatric treatment to truly turn things around. She won’t get real help if she’s simply locked up in the slammer.

Bill might understand why Wyatt wants to watch out for his mom, but he’ll have no sympathy for Quinn. She committed a serious crime and Bill will think she should pay the price. Nevertheless, this decision isn’t up to Bill or Wyatt. Only Liam has the power to get Quinn out of this mess.

B&B spoilers indicate that Wyatt will approach his brother with a plea. He’ll ask Liam to show mercy. Wyatt can sense that Liam has softened toward Quinn lately. Liam at least appreciates the fact that Quinn nursed him back to health while he was in captivity. That has to count for something.

Liam will have to mull over the whole ordeal and decide if he’s willing to give Quinn a pass for her mistakes. This zany woman took away several months of Liam’s life and made him lose Steffy (Jacqueline MacInnes Wood) to Wyatt. It may be hard for Liam to just let that all of that slide.

Still, Liam should take the good times into account as well. “Adam” and “Eve” shared some nice moments at their little love bungalow. It was absolute paradise for Quinn. It sounds like Liam may choose to let Quinn have her freedom – on the condition that she gets professional help, of course.

This could pave the way to the potential Liam and Quinn reunion everyone’s been buzzing about. Does Liam have a weak spot for Quinn? Stick with the CBS soap for updates on Liam’s news and Quinn’s future.