BY Heather Hughes on May 19, 2016 | Comments: 4 comments
Related : Soap Opera, Spoiler, Television, The Bold and the Beautiful 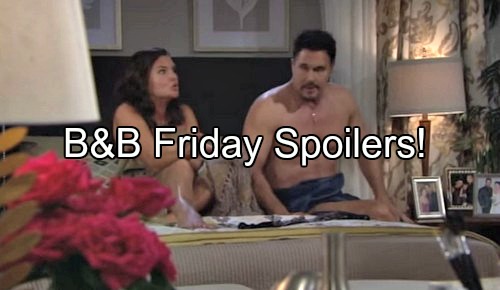 “The Bold and the Beautiful” (B&B) spoilers for tomorrow’s episode, Friday, May 20, tease that Katie (Heather Tom) will demand to know what Brooke (Katherine Kelly Lang) is doing in her bedroom. When Katie and Bill (Don Diamont) started to get intimate, Brooke just couldn’t handle the thought of them doing it right above her.

Needless to say, Katie was stunned to find out her sister had been hiding under the bed.

Brooke will explain the situation, but Katie will have doubts about her motives. She’ll imply that Brooke might’ve been trying to seduce Bill. “The Bold and the Beautiful” spoilers hint that Katie will attempt to put this incident behind her, but we all know it’s going to be a problem. Brooke constantly finds ways to get involved in Bill’s love life.

Even when it’s unintentional, it never fails to affect Katie and her outlook.

Elsewhere, Julius (Obba Babatunde) will get updates on Sasha’s (Felisha Cooper) alleged pregnancy. He’ll think the timing of Sasha’s announcement is quite suspicious. Julius will obviously recognize this as a plot to keep Zende (Rome Flynn) and he won’t like it one bit.

Friday’s B&B spoilers preview video shows Julius saying, “So I’m to believe that you’re pregnant with Zende’s child?” Julius will warn Sasha that she’s playing with fire. Sasha may be Julius’ daughter, but he clearly prefers Nicole (Reign Edwards). Julius thinks Nicole deserves a second chance with Zende, especially since the surrogacy was the only thing that drove them apart.

Sasha was and continues to be the interloper. Julius will argue that Sasha needs to back off and butt out. Sasha will disagree and insist that she deserves an opportunity just like Nicole does. She’ll believe the baby (or “baby” as the case may be) will draw Zende closer.

Next week, Sasha will extend an offer to Julius. She’ll try to make a deal that could be mutually beneficial. In the meantime, Zende will tell Nicole that he’d like to reunite if she’s willing to give him another shot. Nicole will be over the moon, but Zende’s news could kill the mood.

Zende will admit that Sasha says she’s pregnant. Nicole won’t be certain she buys it, but she’ll have to consider the possibility that it’s true. Nevertheless, Zende will assure Nicole that it won’t change things for them. He’ll plan on staying by Nicole’s side no matter what. Will Zende be able to keep that promise?

Stick with the CBS soap to see what the future holds for this couple.