The Bold and the Beautiful (B&B) Spoilers: Wyatt Not Legally Married to Steffy – Hope Returns To Finalize Divorce?

BY Sean O'Brien on May 31, 2016 | Comments: 6 comments
Related : Soap Opera, Spoiler, Television, The Bold and the Beautiful 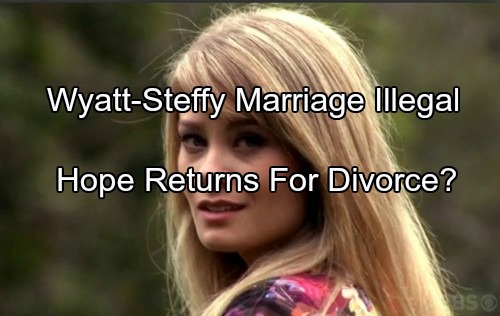 “The Bold and the Beautiful” (B&B) spoilers tease that Steffy Forrester (Jacqueline MacInnes Wood) and Wyatt Spencer’s (Darin Brooks) marriage could suffer a major setback. In fact, the previews claim that Liam Spencer (Scott Clifton) may uncover something that makes him question whether Steffy’s marriage to his brother was legal.

Liam has been working overtime to try to woo Steffy away from Wyatt. A few times, it seemed like she was close to walking out on her marriage and reuniting with Liam. Her marriage vows have held her back, and she believes in the commitment she made to Wyatt.

Soap Opera Digest revealed in B&B spoilers that Wyatt uncovers something upsetting that makes him question whether his marriage to Steffy is legal. It seems to point in the direction that his divorce to Hope (Kim Matula) was never finalized.

Hope has been slated to return to the CBS soap opera for a “handful” of episodes in June. Her guest spots seem to add more fuel to the fire that she will return to finalize her divorce with Wyatt. At first, several months ago, it was believed that she’d return to attend her father, Deacon’s (Sean Kanan) funeral, but he is alive and well.

So what could bring her back, and what piece of information would raise concerns about the legality of Steffy and Wyatt’s nuptials?

Apparently, “The Bold and the Beautiful” spoilers hint that Bill Spencer (Don Diamont) receives a tip from someone from his past that leads him to “someone” that reveals that Wyatt’s marriage is not legally binding. The part of the teaser that is confusing is, what does Bill’s past have to do with Wyatt’s divorce to Hope?

The real question seems to be what will Steffy do when she realizes her marriage to Wyatt was not legally binding? Will she insist they make the nuptials legal or could it drive her straight into Liam’s arms? It’s hard to speculate what may happen next, but one thing is for sure—Steffy will have a difficult choice ahead of her, and there’s no telling what she will do.

Don’t forget to come back to CDL later for more “The Bold and the Beautiful” spoilers, news, and updates.