The Bold and the Beautiful Spoilers: Wyatt Sides with Quinn Against Steffy – Eric’s Long-Term Survival Uncertain 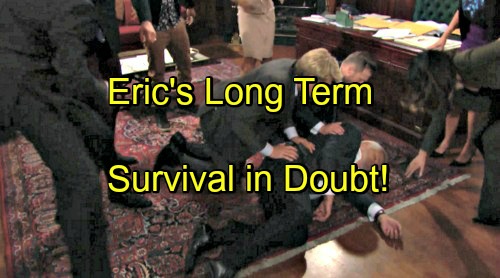 The Bold and the Beautiful (B&B) spoilers for Friday, September 30, tease that Quinn (Rena Sofer) will try to figure out how her dream derailed so quickly. She was supposed to be preparing for her honeymoon. Instead, Quinn is waiting nervously by Eric’s (John McCook) bedside. She’ll wonder why the Forresters would take things this far.

Steffy (Jacqueline MacInnes Wood) will be infuriated by the notion that this is the family’s fault. She’ll suggest that all of this drama started with Quinn. If Eric had married someone sane, they all would’ve joyfully filled the seats. Steffy will maintain that Quinn is the reason for the rapid decline in Eric’s health.

The Bold and the Beautiful spoilers indicate that Steffy will spew some harsh words. Her comments will undoubtedly hurt Quinn deeply. Even if this was about a scheme at the beginning, it’s obviously grown into something more. Quinn adores Eric and she desperately wants to build a life together. Now their future is in jeopardy.

Eric is stable, but he’s certainly not out of the woods yet. The doctors revealed that Eric suffered a brain hemorrhage. B&B spoilers say Eric’s loved ones will face an excruciating wait for news. They’ll hope and pray that Eric will come back to them.

Of course, there’s no guarantee that Eric will awaken exactly like he was before. There may be some severe complications. Eric could face memory problems when he finally opens his eyes. What if Eric doesn’t remember the great love he felt for Quinn? That would be devastating!

Ridge (Thorsten Kaye) will continue to fight Quinn every step of the way. While Eric is incapacitated, Ridge will be in the driver’s seat. He’s sure to feel large and in charge. Quinn will be thrown out of the Forrester mansion in the midst of this crisis.
Wyatt (Darin Brooks) will try to help his mother get through this. He knows Quinn could use someone in her corner right now.

The Bold and the Beautiful spoilers state that Wyatt’s support for Quinn will grow. He’ll feel protective of his mom as Ridge and Steffy attempt to make her miserable.

Wyatt will want everyone to realize that Quinn is in pain. Like it or not, Eric is Quinn’s husband. They vowed to be there for each other in sickness and in health. Quinn is just trying to fulfill her promise and be the wife Eric needs. She wants to help, but she’s facing an uphill battle.

Steffy won’t appreciate the fact that Wyatt is taking Quinn’s side. He’s causing more strife and his marriage really can’t handle it at the moment. Liam (Scott Clifton) is just waiting to snatch Steffy up for himself. He’d do it in a heartbeat if Steffy would allow it.

B&B spoilers hint that Steffy could be headed in Liam’s direction eventually. A reunion is most likely in the works, but Ivy (Ashleigh Brewer) may stir the pot beforehand. We’ll give you updates as other details emerge. Stay tuned and don’t forget to check CDL often for the latest Bold and the Beautiful spoilers, updates and news.