The Bold and the Beautiful (B&B) Spoilers: Zende Breaks Up With Nicole – Jealous Betrayal of Sasha Boomerangs!

BY Monica DelRay on January 13, 2016 | Comments: one comment
Related : Soap Opera, Spoiler, Television, The Bold and the Beautiful 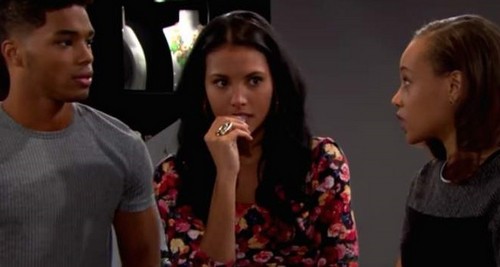 “The Bold and The Beautiful” (B&B) spoilers tease that Zende Forrester (Rome Flynn) may be at the end of his rope soon with Nicole Avant’s (Reign Edwards) hormonal antics. Up until now, Zende has been sexually frustrated and a bit put off by her pregnancy, but what happens next is too much.

Zende has been extremely supportive of Nicole carrying Rick Forrester’s (Jacob Young) baby for Maya Avant (Karla Mosley) even though it’s clearly a big issue for him. He’s been very thoughtful and self-sacrificing – but that was just about waiting for sex and dealing with her morning sickness.

Now Nicole is going to do something that hits Zende hard – and personally – that may spell the end of their relationship – and make him ripe for the plucking by Sasha Avant (Felisha Cooper). We just saw Nicole getting all crazy and green-eyed over the chick from accounting for no reason.

Nicole’s hormones are making her mad territorial. But when Rick hires both Zende and Sasha to be a photographer and model duo, Nicole will go over the line. B&B spoilers indicate that Nicole will use her baby mama influence to get Sasha fired.

The thing is, Nicole is focused on her jealousy and wants Sasha far away from Zende – but Nicole didn’t think about how it would affect Zende or how he would react. It’s not about Zende having feelings for Sasha (at least not yet) – it’s that working with Sasha could be a breakthrough for his career.

Zende wants more than anything to be a fashion photographer. With the Sasha photo shoot, he proved he has the chops. Now Rick has offered him his first gig – and Nicole will wreck it with her jealous demands. When Sasha gets fired, that means Zende’s opportunity may also be lost.

That’s what will set Zende off. Nicole is being horribly selfish. He’s been so good to her and has swallowed his unsettled feelings about her carrying another man’s child. But Nicole proves with this action that she can’t do the same for him.

Nicole won’t swallow her jealousy to allow Zende the chance to realize his dream – it’s all about her all of the time. That’s too much to expect of Zende. It’s bad enough that Nicole’s pregnancy is affecting their relationship – but now his career? Zende doesn’t need that.

When Zende finds out Nicole got Rick to ax Sasha, he will not be happy – there was no reason for what Nicole did to her BFF except for sheer jealousy. That means she can’t trust Zende and would rather wreck his career than be a bit uncomfortable.

This could be the last straw for Zende – and he’s completely within bounds if he calls it off with Nicole over this. What’s ironic is that it could be Nicole getting Sasha fired to keep her from working with Zende that pushes Zende and Sasha together in a boomerang effect she never saw coming.

They will be united in their frustration that Nicole ruined an opportunity for them both – and that shared sentiment could see them doing the last thing Nicole wants. Whether it’s a hook-up or they explore working together outside of Forrester Creations remains to be seen.

Bottom line – Nicole is a spoiled brat who has pushed Zende too far. All the coddling that Rick and Maya have been doing of Nicole (which she admittedly deserves) has made her think she’s more important than anyone else – including Zende. He’s been great – she’s being awful – BAM!

What do you think B&B fans? Is Zende right to be angry at Nicole’s sabotage of his photography career? Will Nicole’s selfish actions be the catalyst that pushes Sasha and Zende together? Share your thoughts in the comments below and come back to CDL often for more “The Bold and The Beautiful” spoilers.