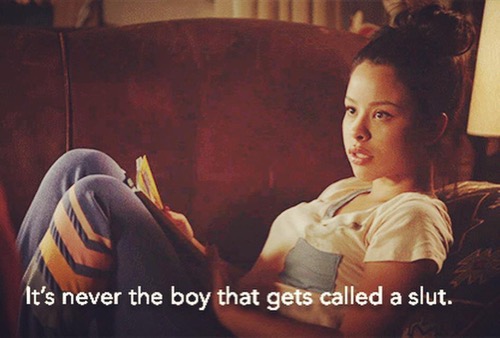 Tonight on ABC Family their hit drama The Fosters returns with an all new Monday July 25, season 4 episode 5 called “Forty,” and we have your weekly The Fosters recap. On tonight’s episode, the family plans a ’70s-themed birthday bash for Lena, (Sherri Saum) but Lena’s mother’s concerns about Stuart threaten to ruin the party.

On the last episode, Brandon threw a party at his and Cortney’s place, not realizing the complications of living with a mom and young child.  Did you watch the last episode? If you missed it, we have a full and detailed The Fosters recap right here for you.

On tonight’s episode as per the ABC Family Synopsis, “the family plans a ’70s-themed birthday bash for Lena, but Lena’s mother’s concerns about Stuart threaten to ruin the party. Meanwhile, Callie and Aaron try to prove Kyle’s innocence; Mariana’s STEAM club vie for an invitation to a robotics competition; Jude’s upset when he learns Cameron visited town without seeing him; and Brandon considers drastic measures to earn extra cash.”

We will be live blogging tonight’s episode at 8pm that airs on ABC Family. In the meantime, hit up our comments and tell us how excited you are for the next episode of the fourth season of The Fosters and enjoy a sneak peek of tonight’s episode below.

Lena parents were in town on tonight’s episode of “The Fosters”. The older couple had apparently come for a visit because Lena was turning forty and they wanted to be there for that yet they hadn’t been there that long before the two were seen sniping at each other and to make matters worse Lena’s mother also had gotten upset with the fact that Brandon had moved out. So eventually Lena had used some time alone with her mom to ask what’s going on. And it turns out that the reason Lena’s father had wanted to stay at the house was not because he wanted to be closer to the kids, he simply hadn’t wanted to be alone with his upset wife now that he’s having an affair.

The affair was most definitely new because her husband’s unexplained absences were recent and it kinda explained why Dana was both disgusted with her husband and unhappy about her grandson moving in with a married woman even if Cortney was currently going through a divorce. However, there are two sides to every story and so Lena ended up wanting to hear from her dad why. Why did he have an affair? So Lena had asked her father about his affair because she thought that he would be able to explain how it was one mistake that hopefully didn’t mean anything though Stewart didn’t quite say what Lena wanted him to say. Instead, he said that he wasn’t having an affair and that he had just been sneaking around because he wanted to hide Dana’s surprise.

Stewart said that he has been making a video for Dana to show her at a retirement party. So he was not having an affair and he also had no idea why his wife kept giving him pointed comments. Yet, Lena had felt bad about how her mom was acting so she had wondered and had even asked Stef if she should tell her mom the truth in order for her mother to stop freaking out. Only Stef didn’t think she should. Stef said that Stewart had gone through a lot of trouble to put together a surprise for Dana and that she would ruin all of his hard work if she blabbed. And so after Stef finished talking Lena out of telling Dana, she then went to Mariana to see if her techie daughter could help put together a video for Lena.

Stef had sorta ripped off the idea however she really wanted to do a video for Lena in honor of her birthday and had been disappointed when Mariana said she couldn’t help. Mariana and Emma were part of a group that had to come up with this new exciting idea to take to the robotics convention. So Mariana and Emma for that matter were both busy brainstorming and constructing their project so that meant Stef had to rely on Jude’s newest friend Noah to help her with the video while Jesus had to do without his friends with benefits. But Emma and Mariana’s project wasn’t easy and the fact that the all girls team had come up with the best robot had made things a bit tricky for them later on.

The advance class that the girls were in was unfortunately, sexist. There were only three girls there and no liked the fact that their robot was better than anyone else. So first they tried to outvote them by electing a different team to go to the convention. Though when the teacher ended up overruling that decision because he realized that the girls’ invention was truly the best in the class, the other students turned on the girls and accused them of playing the female card. As if that somehow negates the fact their robot was faster and autonomous. And that hadn’t played “the girl card” if there even was one because all they said to the teacher was that they should send their best to compete against the other schools.

But later at Lena’s seventies themed birthday party, a few things came to a head.

Callie had done as she promised and had looked into getting her old foster brother Kyle out of prison. So she had looked up Aaron who was a recent acquaintance of hers and had asked him if he or better yet his firm could help. Aaron was interning at a firm that basically acted as the innocence project for kids under the age of 18 so Callie had known that Kyle’s case would be right up there alley. However, she hadn’t been sure that Aaron’s firm would accept the case. The only thing that Kyle had as evidence to exonerate him and prove that he hadn’t killed a neighbor was the fact that someone at the rec center had seen him on the day in question. And sadly for him, his alibi didn’t remember him fours on.

Aaron though hadn’t wanted to give up on Kyle. So he had gone to Kyle’s old house because Kyle’s mother had kept everything attached to the case and he had gone through the paperwork only to find that Kyle’s alibi had given his lawyer a statement. Patrick Molloy had said that he had seen Kyle that day during the time of the murder so that begged the question why he claimed he didn’t remember. Both Aaron and Callie had talked to Patrick and Patrick told them that he didn’t remember seeing Kyle that day do that doesn’t make any sense. Why would he forget seeing Kyle and also speaking to Kyle’s lawyer? Aaron and later Callie felt that he should have remembered seeing as people aren’t generally questioned about a murder suspect everyday.

Aaron had gone to Callie’s house and had interrupted her with AJ because he wanted to talk over the case with her. So that’s how Callie came to the same conclusion as Aaron. They both felt that Patrick might have changed his story after first giving a statement because he was either protecting someone or had been intimidated so they were in the middle of brainstorming about what to do next when Stef broke them up. Stef said that it was Lena’s birthday and that she wanted them to enjoy it as a family. Yet, AJ had backed up Stef not because he shared her sentiment. AJ had actually gotten jealous of Aaron so it looks like he might become a problem for her as she continues to try and help Kyle.

The party however still had plenty of other hiccups. There was the time that Jesus called off his “arrangement” with Emma because she had offered to tutor him and that had made him feel like he wasn’t smart enough for her. So that had been awkward with both Emma and Mariana at the party. Though not as awkward as the time that Lena found out her father had lied to her.

He hadn’t been making a video for his wife, it had simply been trying to hide the fact that he owes the IRS some money and that there was a lean on their house. And therefore Lena’s parents might end up losing their house.
Yet the worst part of the night came when the strippers did. One of the guests had ordered some strippers and they had given Lena quite a show in front of her five children.

However, Jude didn’t really noticed because he had tried to use Noah to make his ex-jealous. Connor was apparently in town and didn’t tell him because he was with his new boyfriend. So Jude had wanted to say “hey, I’m not home alone crying to myself” and that had upset Noah because Noah shuns social media for a reason. He said people could be cruel to a pastor’s gay son and that he didn’t want to subject himself to that. And after Jude had promised to respect Noah’s boundaries, Noah ended up forgiving him.

And surprisingly there was one secret that no one knew about. Brandon had apparently taken the SATs for someone else in order to pay off Cortney’s bills. So the family knew that he was paying for her divorce although they didn’t know how he was doing it or even suspecting the truth until a guest had claimed to see Brandon on testing day. And his lie was barely believable.