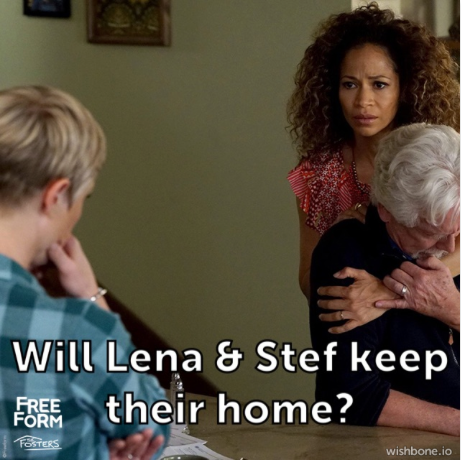 Tonight on ABC Family their hit drama The Fosters returns with an all new Monday, August 1, season 4 episode 6 called “Justify,” and we have your weekly The Fosters recap. On tonight’s episode, Lena (Sheri Saum) and Stef (Teri Polo) are shocked by a secret Lena’s father has been hiding that could jeopardize the entire family.

On the last episode, the family planned a ’70s-themed birthday bash for Lena, but Lena’s mother’s concerns about Stuart threatened to ruin the party. Did you watch the last episode? If you missed it, we have a full and detailed The Fosters recap right here for you.

On tonight’s episode as per the ABC Family Synopsis, “Lena and Stef are shocked by a secret Lena’s father has been hiding that could jeopardize the entire family. Meanwhile, Lena confronts Brandon about the money he gave to Cortney; Mariana must deal with the male members of her STEAM team; Jesus begins to resent Emma; and Jude discovers Noah has a medical-marijuana card.”

We will be live blogging tonight’s episode at 8pm that airs on ABC Family. In the meantime, hit up our comments and tell us how excited you are for the next episode of the fourth season of The Fosters recap and enjoy a sneak peek of tonight’s episode below.

Lena’s father had some unfortunate news for her on tonight’s episode of “The Fosters”. Stewart had apparently gotten into such a mess with the IRS that there was currently a lean against Lena and Stef’s house because Stewart’s name was on the title. So there was a chance, albeit a minor one, that the Fosters would lose their home. But what was more worrisome was what Stewart hadn’t come right out to say. Stewart it seems was under the impression that the two hundred thousand dollars that he had given them for the house was a loan when it was originally supposed to be part of Lena’s inheritance.

So that kind of made Stef and Lena wonder when did that change? Lena had said that it probably happened after Stewart lost so much money after the crash in ’08 so Lena didn’t appear to mind that her father was suddenly changing his tune about whether or not that money was a loan or a gift. Stef on the other hand, felt that they should be very clear moving forward. Stef didn’t want to get caught in the middle of having to repay Stewart back when that wasn’t in the cards and when the family couldn’t afford to do so with five kids that she was hoping to get through college. Yet, speaking of their children, Stef hadn’t thought that she would need to ask her daughter Mariana if she was still in a relationship with Nick.

Nick had seemingly called the house wanting to talk to Mariana as if nothing was wrong so Stef had had to ask her daughter if she had been clear on their last visit to see Nick. Both Stef and Lena had told Mariana that she should be clear with Nick when she told him that she didn’t want to be with him anymore so they had been surprised to find out that Nick had a different idea. However, Mariana had lied to her mothers and had told them that there wasn’t any confusion. Mariana had told them that she ended things with Nick and that she didn’t know why he was still trying to call her. So that had in turn, had made Stef go to Nick’s psych evaluation in front of a judge and do her best to keep him at the facility.

Stef just showed up at the court arraignment and there she had politely asked that Nick stay in care. She said that Nick had threatened her family after lying in wait for well over twenty-four hours in order to get her daughter alone. So Stef had told the judge everything and had also added that she still felt her daughter was in danger because Nick had tried to contact Mariana at the house. But what Stef didn’t know was that Nick had a very good reason to believe he was still in a relationship with Mariana. Mariana had apparently told Nick that she still loved him after he threatened to hurt himself if he lost her too so that had made Nick believe that he was is some grand romance with Mariana. And that it was their parents trying to keep them apart.

The sad truth was that it wasn’t their parents that were keeping them apart. Mariana simply didn’t want to be with Nick anymore and was beginning to take out her anger at everyone she could the longer the lying went on. So things at school soon became uncomfortable. Most epically for Jesus who didn’t know what he did wrong or why everyone at STEAM suddenly had an attitude. Jesus had joined STEAM recently because his family had convinced him to try it out so Jesus was simply trying to find his own place around these incredibly smart kids when Mariana started to scream at him andEmma began acting coldly to him.

Emma began acting coldly to him. Emma, it seems still hasn’t forgiven Jesus for canceling their friends with benefits agreement so that had made Jesus’ STEAM’s experience quite unpleasant. Although, he had wondered what was up with Mariana.

Jesus could see that Mariana was preoccupied with something so he wanted to know what could it be because he had never seen Mariana forget everything much less take her eye off the ball right before a big competition with STEAM. So Jesus had asked Emma if she could give him a ride and he had her follow Mariana until they saw his sister meeting with Nick of all people. Though Mariana’s blundering mistakes with her scholastic career with STEAM and with her parents could not equal the mistakes Stewart committed. Stewart had again lied to Lena when he tried to downplay how much he owed the IRS so when Lena found out the real number it proved to be staggering.

Stewart had unfortunately claimed that he could fix their money problems by getting their affairs in order and paying everything. But it turns out that he owes the IRS three hundred thousand dollars and the only reason Lena had found out the truth was because her mother had gone behind Stewart’s back. Stewart’s wife Dana had gone home to look through some of their papers and she found out everything. She had found out that Stewart thought he could dig himself out of the 2008 hole by throwing his money at get rich quick schemes and that he hasn’t paid his taxes in years because he thought that the next opportunity was just what he needed to make things right with the IRS.

Only the IRS doesn’t work that way. That particular federal department doesn’t wait until a formerly well-off man regains his fortunes for him to decide when he would like to pay taxes again. So that had gotten Lena upset and finding out that Brandon had basically sold his services as a great test taker to get Cortney the money she needed to fight for custody was what finally made Lena snapped. Lena had practically shouted at Callie that she couldn’t change her senior project again or continue to look into Kyle’s case until she was able to complete her project instead of procrastinating. And sure that was harsh, but that had given Callie a push she needed.

Callie had ultimately decided to stay with her project called Seven Homes/ Seven Years. However, she didn’t stop looking into what happened with Kyle or give up on her working relationship with Aaron. So having Aaron proved to be of great help because he had helped Callie face one of her greatest with her projects. Callie had needed to understand that her past abuse and even disappointments were a part of her so that had helped Callie look at her project again with new eyes. And it didn’t hurt that both projects were helping her to get closer to Aaron.

Aaron and Callie had found out that the detective working Kyle’s case had pressured Kyle’s alibi witness to lie and say he never saw Kyle on the day of the murder. So it seems that someone had simply chosen Kyle to be the fall guy and then proceeded to do everything to make Kyle look guilty. Even if that meant witness tampering as well as hiding part of the forensics report. Yet, that report showed that the victim had been killed by a right-handed assailant while Kyle was left-handed so that could help Aaron and Callie to exonerate Kyle before he gets transferred to an adult prison.

But because of the family’s new money troubles, Stef and Lena were looking to sell their house even as their kids were finally cleaning up with their act (except for Jude who tried out pot) and things were finally beginning to feel normal again.