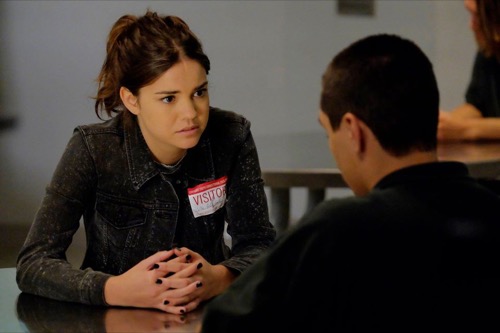 Tonight on ABC Family their hit drama The Fosters returns with an all new Monday, August 8, season 4 episode 7 called “Highs & Lows,” and we have your weekly The Fosters recap. On tonight’s episode, Jesus (Noah Centineo) sustains an injury after he tries to cover for his father who didn’t show up to work.

On the last episode, Lena and Stef were shocked by a secret Lena’s father had been hiding that could jeopardize the entire family. Did you watch the last episode? If you missed it, we have a full and detailed The Fosters recap right here for you.

On tonight’s episode as per the ABC Family Synopsis, “Jesus sustains an injury after he tries to cover for his father who didn’t show up to work. Meanwhile, Mariana takes Jesus’ ADHD medication after feeling drained; Callie and AJ are caught in an awkward situation when Mike and Brandon arrive home early and Stef tells Mike that Brandon gave his settlement money to Cortney.”

We will be live blogging tonight’s episode at 8pm that airs on ABC Family. In the meantime, hit up our comments and tell us how excited you are for the next episode of the fourth season of The Fosters; stay tuned for our The Fosters recap and enjoy a sneak peek of tonight’s episode below.

Callie and AJ haven’t been seeing eye to eye since this thing with her former foster brother began so recently she’s been trying to find a way to make it up to him and unfortunately both Mike and Brandon interrupted what she had been planning. Mike had apparently told AJ that he had an extra shift at and then hadn’t called to tell him that he canceled that in order to have dinner with his boys. So Mike and Brandon had walked into the apartment and had found Callie’s things like her bra thrown over their couch. But Mike who thankfully had been the adult in the situation had politely knocked on AJ’s door as if he didn’t suspect a single thing and just wanted to have dinner with.

However, Brandon had put Callie’s bra in her bag so that she wouldn’t rush home without it. So Callie had found it when she was leaving and had known that the guys suspected what she was really doing with AJ because it sure wasn’t studying like they said yet Callie again used that excuse when she got home and had to deal with her mom’s. Stef and Lena have been trying to get everyone to sit down for family meals so that they could talk and, for some reason, there’s just always something that happens to ruin the mood. If it was not Gabe reneging on his deal to fix up the garage then its Mariana rushing up from the table because she was freaking out about the upcoming robotics competition.

Jesus though had called his biological father to see what was going on and Gabe had been surprisingly out it during their conversation. So Jesus was trying to cover for Gabe because Gabe was refusing to show even after he called him while his twin sister on the other hand, was busy falling apart. Mariana had been under a lot of pressure with the competition and all the guys in STEAM quit after Mariana tried to give them orders. Yet, Mariana was also reeling from Nick being released and feeling like she had to stay in a relationship with him just to stop him from killing himself. Nick, it seems had figured out the one thing he knew would work on Mariana so he has been holding that over her head all these months and emotionally blackmailing her into staying in a relationship with him.

Though with both Stef and Lena both concerned about their older kids and they were, there wasn’t anyone paying attention to Jude. Jude had tried out medicinal marijuana recently and unfortunately that developed more than just a liking for the stuff. So now Jude was meeting with sketchy girls at school (yes, girls can be school drug dealers too) and basically buying whatever she had on her. Which was a lot even if it didn’t come in the edible version that he would preferred yet Jude was developing a nasty habit and it seems he wasn’t the only one partaking in drugs because Mariana was also using. And to be blunt, she was do more than fair share of abusing drugs.

Mariana had gotten her hands on her brother’s ADHD medication so she was secretly stealing his pills from him in order to focus on everything. However, Mariana was popping in those pills as if they were candy and it didn’t look as if she knew how to stop. So Mariana was so caught up in her downward spiral that she hadn’t noticed that she had one brother that was injured when Jude showed up for STEAM with a gigantic bandage on his head and another that was constantly as stoned as she was. And so both Jude as well as Mariana, had actually been stoned when their parents later came home and called a family meeting because they had finally worked up the nerve to tell the kids that they had to sell the house for financial reasons.

They had used financial reasons because they had hoped that would be enough for the kids. But Mariana had been with that excused so she was questioning it when Jesus collapsed. Jesus had gotten injured while he was trying to do up the garage so his parents wouldn’t notice that Gabe hadn’t showed up. So technically Jesus had injured himself because of Gabe. If Gabe had followed through on the deal he had made with Stef and Lena then he probably would have finished the garage already and Jesus wouldn’t need medical attention. And Mariana apparently felt the same way too. She had later told her biological father that what happened to Jesus was his fault and so she had asked him to leave before her mothers saw him.

Jesus’s injury which he thought was some small thing had turned out to be deadly serious. Jesus had accidentally shot a nail into his head and so he was going to need surgery to remove it. Yet, the doctor had been very clear with his parents when they said that there could be some lasting damage. Such as the nail affecting his speech and motor skills. So everyone was freaking out and if Emma hadn’t been there to say what Jesus was doing then no one would have known how he had gotten injured. Or that Gabe had once again blown off the agreement that allowed Stef and Lena to front him the money he needed to pay for the lawyer that got him off the sex offender registry, but things in the waiting room was so tense that Gabe wasn’t the only to get shouted at.

Callie had yelled at AJ when he tried to complain that she was too caught up with Kyle’s case and Callie had also yelled at Jude’s friend Noah for giving him pot in the first place. So Callie had definitely lost her cool while they were all waiting to hear about Jesus’s surgery and unfortunately that had cost her Jude’s trust. Callie hadn’t only yelled at Noah for what he did, she had yelled at him when he was with his mother so now his mother knows what he did and Noah had gotten into trouble because of it. Though Callie didn’t realize what she did to Jude by betraying him until Jude had gotten a text message from Noah and had found out that Noah’s mother had come down on him.

And so Callie and Jude’s relationship was fractured by what happened, but Jesus proved to be fine in the end while Callie had surpassed what she did with Jude by harassing the guy that lied about Kyle’s alibi because she knew that there was no way she could get her former foster brother out of prison without that alibi.