The Mysteries of Laura Recap 1/6/16: Season 2 Episode 9 Winter Premiere “The Mystery of the Triple Threat” 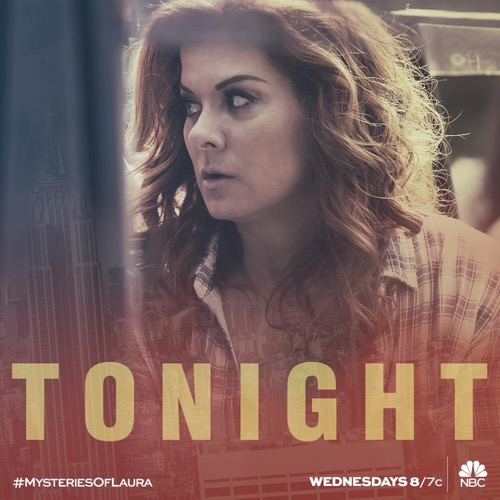 Tonight on NBC The Mysteries of Laura continues with an all new Wednesday January 6, season 2 episode 9 called, “The Mystery of the Triple Threat” and we have your weekly recap below. On tonight’s episode the team track a killer involved in an urban treasure hunt, and it leads them to places of extremes, including grungy rooftops and lavish music halls.

On the last episode, as Laura (Debra Messing) and the team investigated who exposed an undercover cop and caused his murder, an unseen attacker breached their systems and targets them, forcing the 2nd Precinct to switch tactics in order to find him before he got another officer killed. Did you watch the last episode? If you missed it, we have a full and detailed recap right here for you.

On tonight’s episode as per the NBC synopsis, “the team track a killer involved in an urban treasure hunt, and it leads them to places of extremes, including grungy rooftops and lavish music halls. While on the case, Laura ponders the new manifestations of modern love.”

We will be blogging The Mysteries of Laura season 2 episode 9 with all the up-to-the-minute details at 8PM EST so make sure to come back to this spot and watch the show with us. Make sure to refresh often so you get the most current info! In the meantime, sound out in the comments and let us know what you think of the series.

Usually dead bodies aren’t a good thing but there was an exception on tonight’s episode of “The Mysteries of Laura”.

Laura had recently been going back and forth on which man she wanted to be with and, while she was still confused about that, she didn’t want Tony to break up with her in the meantime. So a dead body was perfect for Laura because it allowed her to escape a potentially awkward conversation with Tony. He had apparently come over in order to talk. And Laura knew nothing good could come from that.

However, Laura never would have wished for such a complicated case to drag her away. The body of a young man had been found in a church. And there was no means of identifying him other than a online treasure hunt.

It seems the guys that did find their victim were taking part in this year’s annual New Gotham Treasure Hunt and when the victim’s body – they had assumed he had been another player. He was found in the center of the church after what it looked like a fall from choir balcony. And that’s where one of the clues had been hidden.

So to find a killer and hopefully identify their victim, Laura and her people had to be reluctant game players. Meaning they had to decipher the clues and get to the flash drive prize before anyone else. The Flash drive had 100,000 dollars in bitcoins and it sounded like the perfect motive to kill someone over.

But once Laura found the flash drive, she didn’t find her killer. She just found Elliott Lansky who had been a lowlife human being that had found their victim first but decided to rob him just so he could continue with the game. And that meant there was chance their victim hadn’t been part of the treasure hunt after all.

Although the fact Elliott robbed their victim came in handy. Elliott had stolen the victim’s camera and inside of that camera was a chip that had Peter’s identity and address. Peter as it happens was involved in a “thouple”. A throuple being a marriage that goes three ways.

Peter had a husband and wife. And they all slept together. So it’s safe to say that Peter was unconventional but that ended up costing him his entire career.

Peter, Maya, and Chris had gotten their relationship covered by the Post and that alerted Peter’s biggest account as an event’s planner. A socialite had apparently hired him early in the year to throw the event of the social season and if it panned out then it would have launched his business into a whole another stratosphere. And a thing like that would have been worth anything.

Including dropping all of his other clients. So that’s what Peter ended up doing. He dropped everyone else and devoted himself entirely to making Sylvia Van Owen happy. And how she did repay him? She later fired him once she found out about his “throuple” and she hired his former assistant.

A Ingrid Bower who seemingly knew nothing about loyalty. Though she did have a viable suspect for the police. She told them about Alison Beck and how Alison had basically been a vocal hater of Peter’s living situation. So Laura and Jake went to go check Alison out.

And Alison ended up having an interesting tale as well as an alibi. Alison was once Peter’s fiancée but he broke off their engagement because he said he wasn’t ready for a commitment. Therefore, when she read about him being marriage with two together people, she realized the problem wasn’t him. It was her.

So Alison had gotten upset and she kind of stalked for him a bit before the two eventually met up. And once they did, they discussed their problems back then and occasionally slept together behind their respective others’ backs. Though Peter had gone one step further when he told her that he was thinking about leaving Maya and Chris.

A big decision by the way but it didn’t appear to have an effect on Alison. She had been involved in a relationship as well. And she wasn’t going to leave the illustrious Niles Volant for an out of work Peter. Yet Peter did get a job after Sylvia Van Owen.

They found a wedding concept in his design book at his secret apartment. The same one that Alison told them about and there Meredith had unfortunate run-in with the killer. He had come up from behind and had knocked her out.

But he hadn’t gotten what he came for. Their killer, Niles Volant, hadn’t gotten his hands on Peter’s concept book. The same one that had a wedding basically built around Alison because Niles had set him up and it had always been Niles’s intention to kill Peter in order to keep Alison.

And the truth came out after Laura said the one thing that would make Niles run. She told him they could compare his DNA with that which was found on Peter’s body and he made a run for it like a guilty man that he was. But later when the guys had all gone out for drinks – Laura had accidentally heard from Jake’s doctor and she found out he had still been lying about his condition.

So when she ran into Tony again, she wasn’t confused anymore. She knew she wanted him and he knew he wanted her more than the job offer in Vegas. Which was what he wanted to talk about.