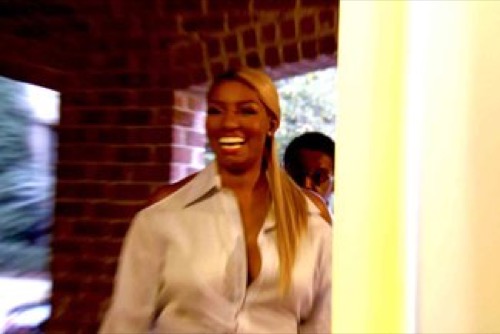 Tonight on Bravo The Real Housewives of Atlanta continues with an all new Sunday January 17, season 8 episode 11 called, “Ms. Parks Goes to Washington,” and we have your recap below. On tonight’s episode, Phaedra Parks hosts a trip to the nation’s capital to garner support for her Save Our Sons organization and invites a few of the ladies to tag along.

On the last episode, Kandi finally began to slow down as Mama Joyce helped her prepare for her bundle of joy to arrive. Phaedra received a surprise visit from Mama Joyce and was faced with an offer she couldn’t refuse. Cynthia was whisked away by Peter on a romantic getaway to rekindle their relationship.

Porsha has a tough conversation with her sister Lauren to discuss how her pregnancy was affecting their business. Phaedra and Todd work to settle their financial differences, while Kenya heads to Detroit to reunite with her family and hopefully reconnect with her mother. Did you watch the last episode? If you missed it, we have a full and detailed recap right here for you.

On tonight’s episode per the Bravo synopsis, “Phaedra hosts a trip to the nation’s capital to garner support for her Save Our Sons organization and invites a few of the ladies to tag along. During their visit to Congress, Kim once again finds herself on the outskirts of the festivities.

Kenya’s family drama continues after she returns from Detroit resulting in an argument with her Aunt Lori. Kandi and Todd work to convince her aunt’s to join in on their next business venture. Meanwhile, former besties Cynthia and NeNe reunite over cocktails and plenty of laughs.”

Tonight’s episode is going to be filled with more crazy housewife drama that you won’t want to miss, so be sure to tune in for our live coverage of the show tonight at 8 PM EST! While you wait for our recap hit the comments and let us know how excited you are about this new season eight of The Real Housewives of Atlanta!

On this weeks episode of Real Housewives of Atlanta Phaedra prepares to take her sons to Washington D.C to commemorate the million man march along with Porsha because she has sons as well and Kim. Aiden’s dad Apollo calls.

Kandi and her husband discuss the new restaurant and they decide to share her book of recipes. They decide to get the family together and tell them at her mom’s house but Kandi is really reluctant about the whole idea.

Meanwhile Kenya is having issues with the redesigning of her house. Cynthia comes by the house to pay her a visit and she finds the house to be a disaster. Cynthia asks her about the reunion and Kenya tells her about how close she and her dad managed to become and she also tells her about being shut out by her mom. Cynthia talks about being a mother to Noah and not being able to imagine not acknowledging her daughter.

Phaedra’s son Aiden tells his father that he is getting ready to go to Washington D.C and Apollo chastises his son about bad behavior in school before the call is ended. Aiden is excited about the trip to Washington though.

When Phaedra, Kim and Porsha arrive in Washington Phaedra gets ready to meet with a congresswoman who started a program that she is looking to implement to help send young, black men to college. While Phaedra and Porsha are ready to go Kim and her sons are running late so they decide to send another car for her so that they can keep the appointment.

When the group gets to the White House everyone is excited and talking about Phaedra’s organization, Save Our Sons. Meanwhile Kim has some issues with the conversation that is taking place and takes her children from the room after making an obscene gesture toward the congresswoman.

Kenya’s aunt Lori stops by to talk to her about her mother. She told her that she loves both Kenya and her sister, but she believes that her mom has every right to give her child away. Kenya tells her aunt that she has no issue with being given away. Instead she takes issue with the way her mother has treated her since she has come back into her life.

The confrontation between Kenya and her aunt continues and her aunt tells Kenya that she was wrong to just show up at her mother’s house without calling. Kenya tells her aunt that she is tired of being ignored. Kenya then tells her that after being at the house and that final confrontation “a dark cloud had been lifted off of her and she felt lighter.”

Phaedra organized a luncheon to lobby the members of Congress to help get the word out about Save Our Sons. Her children are not happy and they are not having any fun. Kim’s children are fussing throughout the lunch and so she decides to pack them up and leave and Porsha comments on how rude Kim is and how she needs to learn to travel and roll with the punches. While Porsha understands what Kim is going through she still feels that Kim is babying her kids and needs to not “shut the world out.”

Kandi and Todd put together a family dinner to propose their idea for the restaurant. Todd asks who the best cook in the family is and they say there is no best cook. The family starts asking all kinds of questions. The family seems a little opposed to the idea, but the more they talk the more open the family becomes to the idea.

On the day of the Million Man March Porsha flirted with Sheree’s son who was only 19 while on the bus. Kim leaves the march early to go to the airport and leave for Atlanta before the march really begins because she has to host another event. Trayvon Martin’s mother spoke at the march and Phaedra was happy that even though her sons may not be able to completely understand the significance of what was happening she would be able to tell them that they were apart of history when they were older.

Porsha got bored as the day wore on. Phaedra brought back a group of women called Mothers for Justice United, who shared their stories of their sons being killed and underscored the purpose of Phaedra’s organization.

Cynthia reflected on her conversation with Kenya and it caused her to reflect on her relationship with Nene. She decided to invite her over to the house to hang out with her and her husband for wine and cheese. Nene tells Cynthia that she was hurt that their friendship dissolved and that was why she blocked her on social media. Nene decides to start a new friendship with Cynthia.

Cynthia tells Nene that Kenya is her girl and Nene gets a little sensitive, but Cynthia assures Nene that no one can take her place in Cynthia’s life. Cynthia fills Nene in on all the news going on with all of the other women.