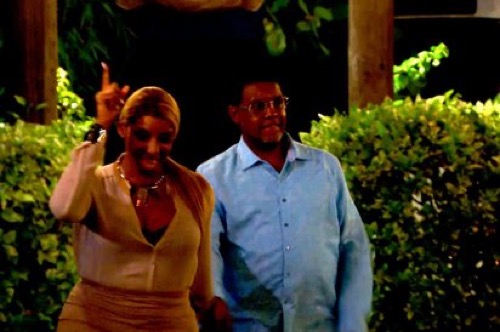 Tonight on Bravo The Real Housewives of Atlanta continues with an all new 75-minute Sunday January 31, season 8 episode 13 called, “Jamaican Beef Catty,” and we have your recap below. On tonight’s episode, the ladies take over Jamaica with their men in tow for a little fun in the sun. NeNe Leakes surprises the girls on the island and creates an immediate rift between Kenya Moore and Cynthia Bailey’s friendship.

On the last episode, Kandi and Todd prepared for Baby Tucker’s arrival with a refresher course in parenting, while Phaedra and Ayden got crafty to celebrate Apollo’s birthday while he’s away in prison. Kim planned an event for her new friends — a make-up free “beatless brunch,” but the ladies had some very strong opinions about Kim’s idea of beauty.

Cynthia began planning for her eyewear commercial and things got tense when she decided to have Kim and Kenya pitch their ideas and work together. However, one of the ladies failed to deliver, bringing their friendship into question. Did you watch the last episode? If you missed it, we have a full and detailed recap right here for you.

On tonight’s episode per the Bravo synopsis, “the ladies take over Jamaica with their men in tow for a little fun in the sun. NeNe surprises the girls on the island and creates an immediate rift between Kenya and Cynthia’s friendship.

Meanwhile, back at home Kandi and Todd prepare for Baby Tucker’s arrival. Kenya is devastated when Cynthia cuts her out of her plans for her eyewear commercial, and Kim gets heated when her directing credentials are questioned — revealing a very different side to her personality.”

This week on The Real Housewives of Atlanta everyone is preparing for the couples trip to Jamaica. Kenya hires a stylist to make sure that her wardrobe is ready and her sister Lauren seems excited for her.

Cynthia is preparing for her commercial in addition to having fun with her friends. Her husband Peter and Cynthia have decided to surprise the group by inviting Nene and her husband Greg on the trip. Peter decides to go down there early to have some fun before the work begins.

Kim is getting ready for the trip by packing for her and her family including her kids. Erica, Kim’s babysitter, asks her if anyone else is bringing their kids on the trip and Kim tells her no. Kim says that while she understands that this is a social trip she and her husband don’t travel out of the country without the children.

The women all arrive at the airport to leave for the trip. Kenya is bringing her new boyfriend Matt and this will be their first couples trip together. As the women arrive and meet up in Jamaica the women are surprised to find out that Kim has brought her children. When Kenya introduces Matt to the group Porsha says that she “has always wanted to meet one of the employees of Moore hair care, now that Bob is off the payroll.

Cynthia feels uncomfortable that Phaedra has put her in the position to divulge her decision to go with Kim as the director in front of everyone and tells Kenya that they need to talk later on. Kenya tells her that they can talk, but she feels put out that Cynthia had invited her all the way to Jamaica and was now seemingly backing out of their arrangement. She says that she has some ideas that Cynthia will love.

The couples arrive at Moon Palace and are greeted with drinks and wonderful hospitality. Peter welcomes all of them to his home country. All of the couples are escorted to their suites and they love them.

Kim, Cynthia and Kenya meet up and talk about the commercial. Kenya is upset when she hears that Cynthia has decided to go with Kim as the director. Kenya feels disrespected because she is being left out. Cynthia tells Kenya that she was “not respectful when she didn’t show up for the pitch meeting.” Kenya tells Kim that she feels that she is getting between her and her best friend. Kenya asks Kim how many commercials she has done and Kim tells her that it is none of her business since she is not the client. Kenya then tells her that “she doesn’t have to be the client to ask her a question.”

Kim and Kenya continue to argue and Cynthia is left feeling mortified. Kenya accuses Kim of treating her like a child and Kenya tells Kim that “everything about her is tired.” As the argument rages Kim decides to get up and leave the table. Cynthia realizes that it would have been a disaster for Kim and Kenya to work together and she tells Kenya that she doesn’t like what she did.

Phaedra and Porsha are preparing to go out and the two begin to talk about the fact that Kim has brought her children on the trip.

When Kim gets back to the room she discusses the meeting with her husband and he tells her that she needs to calm down because they baited her and she fell for it.

Cynthia and Peter go to visit Nene and her husband in their room and Cynthia tells her about the meeting between Kim and Kenya and herself. Nene tells her that she has to move on and Cynthia agrees.

Kenya is reluctant to go to dinner with the other girls because she is still feeling hurt about the fact that Cynthia has chosen to go with Kim over her in shooting the commercial. She tells Bobby that she would rather just spend time with him. Bobby tells her that they should go because they have already promised that they would be there.

Kenya was even more upset when she finds out that Cynthia has decided to ask Nene to be in the commercial. Peter asks what Kenya’s problem was about the commercial and she tells him that she doesn’t want to discuss it.

Kim tries to address the situation and it ends up becoming the topic of discussion at the table. When it is revealed that Cynthia is BFF’s with Kenya and that her feelings are hurt. Cynthia says that she “saw a side of Kenya that she did not like, and that she needs to leave the island if that was how she was going to act.”

The next day Sheree goes to visit Nene. They are genuinely happy to see each other. The two of them reflect on the last time they saw each other and talk about how they may have said some ugly things but they still respect each other. Nene asked how the women received her and Sheree said they were surprised to see her.

Phaedra and Porsha were lounging by the pool and having a conversation about last nights events and Phaedra said that Kenya looked “like she had seem the ghost of Christmas past when Nene walked into the dinner.”

Back in Atlanta Kandi and Todd have dinner with her family. Kayla asks if they are ready for the baby and Kandi says that they are pretty much ready. Todd asks about the nanny situation and Kandi says “her mother is right down the street.” Todd worries about Momma Joyce being the full time Nanny due to her age.

Cynthia’s sister Mallory shows up thanks to Peter. Sheree goes to see Kenya and asks her why she left. Kenya says that she didn’t want to talk about the issue anymore and then they discuss Nene’s arrival at dinner. Sheree asks if Kenya would consider Cynthia one of her best friends and Kenya says yes. Sheree tells her that Cynthia denied their friendship. Kenya is really hurt and she decides to talk to Cynthia about the situation.

Cynthia and her sister were having breakfast when Kenya knocks on her door and Cynthia wonders if Kenya came to confront her. Kenya tells Cynthia that she heard about what she said and that she was not happy that Cynthia denied their friendship. Kenya and Cynthia argue and Kenya tells her that she is hurt about the commercial and the fact that Nene is back in her life. Kenya decides not to go to Kingston with everyone else.