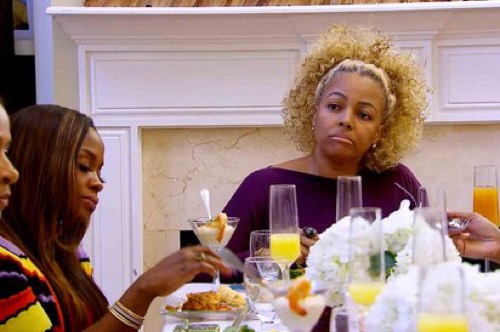 Tonight on Bravo The Real Housewives of Atlanta continues with an all new Sunday January 24, season 8 episode 12 called, “Beauties and the Beat,” and we have your recap below. On tonight’s episode, Kandi Burruss and Todd prepare for Baby Tucker’s arrival with a refresher course in parenting, while Phaedra Parks and Ayden get crafty to celebrate Apollo’s birthday while he’s away in prison.

On the last episode, Phaedra hosted a trip to the nation’s capital to garner support for her Save Our Sons organization and invited a few of the ladies to tag along. During their visit to Congress, Kim once again found herself on the outskirts of the festivities. Kenya’s family drama continued after she returned from Detroit resulting in an argument with her Aunt Lori.

Kandi and Todd worked to convince her aunt’s to join in on their next business venture. Meanwhile, former besties Cynthia and NeNe reunited over cocktails and plenty of laughs. Did you watch the last episode? If you missed it, we have a full and detailed recap right here for you.

On tonight’s episode per the Bravo synopsis, “Kandi and Todd prepare for Baby Tucker’s arrival with a refresher course in parenting, while Phaedra and Ayden get crafty to celebrate Apollo’s birthday while he’s away in prison.

Kim plans an event for her new friends — a make-up free “beatless brunch,” but the ladies have some very strong opinions about Kim’s idea of beauty. Cynthia begins planning for her eyewear commercial and things get tense when she decides to have Kim and Kenya pitch their ideas and work together. However, one of the ladies fails to deliver, bringing their friendship into question.”

Kim is visited by her stylist and friend Victoria. Kim tells her about the brunch she is hosting and asks for ideas to make it special. She tells her the idea of having a Brunch that is all about no makeup and natural beauty. Victoria tells her that she will give her a list of things to do and that she needs to get the furniture moved around.

Phaedra and Aiden mcake a birthday card for Aiden’s dad Apollo’s birthday while he is in jail. Phaedra admits that she has to start thinking about her life since Apollo was selfishly thinking about his and went to jail.

Kim calls all the ladies and leaves a voicemail inviting the ladies to the makeupless brunch and the ladies do not react positively to the invitation.

Kandi and her best friend are talking about the baby and her friend mentions having a nanny. Kandi says that she doesn’t want a nanny caring completely for her baby. Todd and Kandi hire a woman named Margaret to give them in home parenting classes so that they are able to chas a are for their child. She shows them how to diaper the baby and swaddling.

Phaedra decides that she is ready to file for divorce and move forward with her life. Her lawyer tells her that she has invited

Apollo’s lawyer Randy to sit down with them and work out a parenting plan. She also asks Phaedra how she feels about taking the kids to the prison to see their father. Phaedra says that ” She and Apollo differ in openion on that but she is willing to do so when they are older.” She also is hoping that Apollo will be transferred to a more child friendly facility. Apollo’s lawyer shows up and the three continue to talk.

Kim prepares for her “beatless brunch” and waits for the arrival of the other women. Phaedra and Kenya are dissing Kim on the way to the party and saying that she doesn’t understand that women don’t go anywhere without their make up. Porsha arrives from work wearing make up and two pairs of lashes and apologizes to Kim, who asks her if she’d “like to check her lashes at the door?” Porsha responds by saying “maybe one pair” and the two women chuckle.

Once all the women are there they begin to talk and they ask Pheadra about D.C and she tells them about how successful it was and they talk to Kenya about her family reunion in Detroit and she fills the rest of the women in on what happened with her mother.

The women all talk about the make up shoot and Cynthia tells the girls that she wants Kim and Kenya to help direct the shoot. She also tells them that the shoot will be a location shoot and that all the women are invited. Kandi informs them that she will be unable to go because her Dr. does not want her traveling due to the late stage of her pregnancy. The women all empathize and promise to send her lots of pictures and “selfies.”

Kenya confronts Kim about the message she left and tells her that she was offended by it. Kim felt that Kenya took it the wrong way and Kenya accused Kim of dismissing her feelings.

Cynthia was supposed to meet with Kim and Kenya. Kim shows up and when Cynthia calls Kenya she tells her that she can’t come to the meeting because there is something going on with her house and she’ll have to meet with her later.

At the house Kenya is with her boyfriend Matt working. The two are discussing a possible future together. Kenya says that Matt is a guy that “Used to sit on the bench and has now been added to the starting lineup.”

Kim and Cynthia are brainstorming ideas for the commercial. Cynthia tells Kim that she wants her and Kenya to work together on the project and that the two of them could be dynamic if they brought their ideas together. Kim tells Cynthia that she is not interested in being a part of a toxic working environment and being a co director. Cynthia thanks Kim for her ideas and her help and the two leave the restaurant.