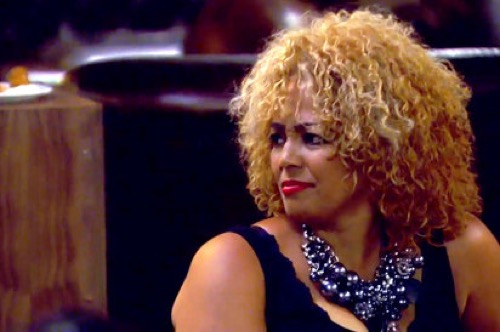 Tonight on Bravo The Real Housewives of Atlanta continues with an all new Sunday February 21, season 8 episode 15 called, “Read School Is in Session,” and we have your recap below. On tonight’s episode, in the aftermath of the rumors regarding Kim Field’s husband’s sexuality, Phaedra Parks and Nene Leakes offer her some advice on how to stand up against the accusations.

On the last episode, the “BFF” drama continues after Cynthia was confronted by Kenya regarding statements she made to the other ladies. Peter plays tour guide and took the group on a personal adventure to meet his family in Jamaica. Meanwhile, Kenya and Matt stayed behind at the resort for a bit of romance.  Did you watch the last episode? If you missed it, we have a full and detailed recap right here for you.

On tonight’s episode per the Bravo synopsis, “in the aftermath of the rumors regarding Kim’s husband’s sexuality, Phaedra and Nene offer her some advice on how to stand up against the accusations. Meanwhile, back in Atlanta, Kandi and Todd struggle to convince a hesitant Aunt Bertha to take part in their family restaurant idea.

Will they ever be able to get her on board with the rest of the gang? As the trip begins to ‘wind down’ in Jamaica, tensions hit a peak between Kim and Kenya, causing Cynthia to once again be caught in the middle.”

This week on Real Housewives of Atlanta Cynthia tells Kim about the conversation that took place between all the women the night before. Porsha tells her that Kenya mentioned that he was “Fruity or gay.” Cynthia tells Kim that they googled her husband and it came up as “Kim Fields and her fruity baby daddy.”

Cynthia says that Kenya stirred the pot and that she wishes that Kenya would respect Kim more or respectfully leave her alone. The women settle their differences and Kim goes off to bed. After she leaves Phaedra calls Kenya out for talking about Kim’s husband behind her back, but not having the courage to say it to her face.

The next morning Kim, Phaedra and Nene meet up for breakfast. Nene feels bad for participating in the conversation about Kim’s husband Chris. Nene tells Kim that she needs to “chop off the head of the snake” after Kim says that she feels like a target. Phaedra says that Kim is going to have to stand up for herself because Kenya knows she can bully her. Phaedra and Nene do a role play exercise to show Kim how to react to Kenya when she does confront her. Phaedra tells Kim “I got your back.”

Kandi and her husband Euro to try and find a chef for their future restaurant. They meet with Javion Barnes to see if his style will fit in with the vision of what they want their restaurant to be. Tony says “the one glitch in his plan is that Aunt Bertha is not on board. She is the heart and soul of family dinner so she has to be on board.”

Kandi’s mom and Aunt Bertha show up to sample the food that Javion has prepared. Bertha is being difficult and tells the Chef that she doesn’t eat Salmon so she will try the pork that he brought out. When the meal is finished Bertha is pleased and finally backs their idea of opening a restaurant.

Back in Jamaica Kim is getting ready to go on a day trip and calls her husband Chris to tell him about what they said about him being gay. As they discuss the issue Chris tells Kim “ Google has more on all the women and their husbands than they do on me. I wouldn’t mind reposting any of their mug shots.” Kim laughs and tells him that Phaedra and Nene want her to “come for Kenta, but I won’t do that.” She then talks about David putting on Saul’s armor and it being too big. Chris laughs and tells her to handle it.

The group goes rafting and while Phaedra, Nene, Sheree and Kim all try to help each other out Kenya races to the top of the falls and waits for everyone else to get there like it is a competition. Nene says that Kenya is isolating herself and that is not what the trip is supposed to be about.

As night falls in Jamaica the group heads out to enjoy some Jerk Chicken. Peter takes them to a restaurant and everyone is sitting down enjoying their meal. The men and women are at separate tables and Kenya and the women start talking about Matt and Kenya.

The men tell Matt that they all love Kenya and they ask about the age difference between Matt and Kenya.

At the women’s table Nene mentions that they had breakfast with Kim. Nene starts confronting Kenya about the issues that the two of them have. Nene tells Kenya that she needs to listen to Kim about the issues that she has with her. When Kenya asks Kim what her issues are with her. Kim tells her that she is tired of being disrespected and that she won’t allow her to speak about her husband and family the way that she did. Kenya tells Kim that she won’t allow her to “come for me.”

Cynthia gets upset at the way that Kenya addressed Kim and tells her that ” She didn’t come for you in a shady tone and you need to show her some respect.” Cynthia also tells Kenya that she was wrong for pulling Kim’s chair out when she wanted to leave at their last gathering and you need to apologize.” Kenya tells Kim that “She didn’t mean to disrespect her and that she was just angry.” She then apologizes for the incident with the chair and Kim accepts her apology. Kim says “We don’t have to be friends or hang out, but we do need to respect each other.”

Nene, Sheree and Cynthia meet up the next day to talk about the incidents with Kenya. Cynthia jokingly asks Nene if she “can use her services.” When they talk about the issues Cynthia tells them that the biggest issue seems to have developed because she chose to use Kim to direct the commercial over Kenya. She has made a list of all of her issues with Kenya including her behavior at the commercial shoot, the fact that she decided not to show up when Cynthia needed her and confronting her in her room about the issues over her friendship with Nene.

The last night in Jamaica Peter puts together a party with fire eaters, music and dancers. Everyone is having a great time. Phaedra says “At first I was hesitant to come on a couples trip alone, but everything worked out well.” When the group sits down to dinner Kenya is late. Nene says for Cynthia to “add that to her list.”

The women ask where Kenya is. They say they “thought she would be here by now.” Peter thanks all of them for coming on the trip and while he is giving his speech Kenya shows up looking flushed.

Cynthia finally confronts Kenya and she tells Cynthia that she feels hurt and disrespected. Cynthia tells Kenya that when she chose Kim to do the commercial Kenya was her first choice to be her “friend.” Kenya then asks her if this was before or after Nene came back. Kenya tells Cynthia that after she chose Kim to do the commercial she was “in her feelings.” Kenya then apologized to Cynthia and she accepted. Kim tells them that she will have footage to view of the commercial.