The Real Housewives of Atlanta Recap: RHOA At The Beach – Season 8 Episode 14 “Peaches of the Caribbean” 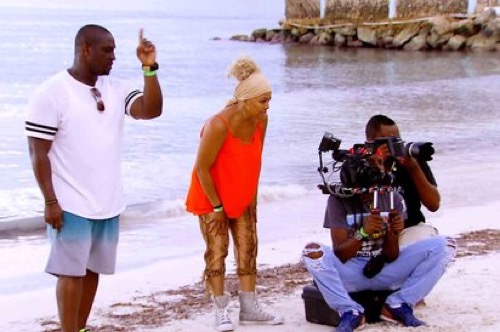 Tonight on Bravo The Real Housewives of Atlanta continues with an all new Sunday February 14, season 8 episode 14 called, “Peaches of the Caribbean,” and we have your recap below. On tonight’s episode, the “BFF” drama continues after Cynthia Bailey is confronted by Kenya Moore regarding statements she made to the other ladies. Peter plays tour guide and takes the group on a personal adventure to meet his family in Jamaica. Meanwhile, Kenya and Matt stay behind at the resort for a bit of romance.

On the last episode, the ladies took over Jamaica with their men in tow for a little fun in the sun. NeNe surprised the girls on the island and created an immediate rift between Kenya and Cynthia’s friendship. Meanwhile, back at home Kandi and Todd prepared for Baby Tucker’s arrival. Did you watch the last episode? If you missed it, we have a full and detailed recap right here for you.

On tonight’s episode per the Bravo synopsis, “the “BFF” drama continues after Cynthia is confronted by Kenya regarding statements she made to the other ladies. Peter plays tour guide and takes the group on a personal adventure to meet his family in Jamaica. Meanwhile, Kenya and Matt stay behind at the resort for a bit of romance.

NeNe plays peacemaker in an effort to convince Kenya to come hang with the ladies, all while things heat up between the men when Kenya’s new beau Matt clashes with Peter. On the day of the big commercial shoot, storm clouds and Kenya’s cold behavior threaten the success of the shoot and dampens everyone’s spirits. Kim who was on cloud nine is taken aback by gossip about her husband, leaving everyone speechless.”

On this week’s episode of Real Housewives of Atlanta as the rest of the group heads off to Kingston, Jamaica Cynthia and confronts the women about the misconception that she and Kenya were friends. Cynthia tells the women that she feels hurt that Kenya feels as though she doesn’t cherish their friendship. Kim asks her if she has told Kenya how she feels. Cynthia tells her “no.” She also tells the women that each of them has a different type of friendship with each other.

Meanwhile Kenya decides to skip the trip to Kingston and go to the hotel spa with her boyfriend Greg. She tells him that “she feels really hurt by the fact that Cynthia decided to say that they are not best friends because she loves her like a sister and Nene has done nothing but tear her down over the last four years while Kenya has tried to build her up.”

The group arrives in Kingston and Peter introduces them to his aunt. Cynthia says that “it is cute to watch Peter and his aunt hold hands.” The group gets to learn more about how Peter was brought up. Peter tells them about how his father only hit him once.

Kim is getting everything ready for Cynthia’s photo shoot. She tells everyone that the call time is 10 A.M and she tells the girls to leave their “dental floss” at home. Phaedra says that Kim is wrong about not using scantily clad women in the shoot because “sex sells.” She also says that if she and Porsha put on their thongs Cynthia will have to restock the shelves because “Sex sells.” Peter asks if everyone enjoyed the food and tells them that it will probably be another twenty years before they do it again. Cynthia says that “she hopes it won’t be twenty years before Peter sees his family again.”

The men have drinks in the bar and Chris asks Peter how Kingston was. Peter tells him that the fish fry was good. The men grill Matt and he gets really defensive. Peter tells Matt that “he needs to slow down with all that hard core stuff.” Matt tells the men that “he doesn’t play like that.” Peter tells him that “no one is playing with him.” The two men get heated and Matt asks if they want to take it outside.

The women sit around and Porsha asks where Kim is. There is speculation that she wanted to spend the night with her man. All of sudden Porsha tells them that there are rumors about Kim’s husband. Cynthia decides that she doesn’t want to participate in the gossip because “Kim is not there to defend her and her husband. Nene says that “She knows that Chris used to work on Broadway.” Phaedra asks if he was “playing Roxy?” Someone else makes a comment that they should “check his purse.”

The next day Kim is preparing for the shoot and checking to make sure that everything will be perfect. Cynthia arrives for the commercial and Kim tells her that they are going to work on voice overs and the ending shot. Cynthia tells her that she has no idea what time the others will be arriving and Kim says “that is why she scheduled them at the end of the day.” The two work together to film parts of the commercial.

When the other ladies are on the bus on the way to the shoot Nene questions Kenya about her and Matt’s trip to the spa and how they had requested a couple’s area. Phaedra questions Matt as to why he is so quiet and Matt says that he “was thinking about how much he enjoyed it.” Kenya wonders why Phaedra is asking so many questions and whether or not she wants her man.

Kenya is looking at the call sheet and calls it “amateurish” stating that she doesn’t have any call times or directions to the nearest hospital. The women can see that Kenya is still upset about being edged out of working on the commercial and one of them calls her “passive aggressive.”

At the photo shoot a thunderstorm on the horizon threatens to spoil the shoot. Cynthia says that “they only have one day to get the shots and this is it.” Kim decides that they will work until it begins to rain.

When everyone else arrives the weather is getting worse. Kenya says that “the beach doesn’t look sophisticated or serene.” She also says that she is “not being petty it is merely her professional opinion.” Nene is helping to style the women. Everyone is rushed into place and Kenya decides to get into one of the kayaks and paddle pretty far out and falls into the water. The women feel that Kenya’s behavior is not being supportive of her best friend. Phaedra says that “Kim is doing a wonderful job as the director.” She tells Kim to drive.

Cynthia is upset at Kenya’s behavior and doesn’t feel as though she is there to support her.

Kenya and Matt have a conversation about the night before when the men went out for drinks. He tells Kenya that Peter and Greg were overly aggressive and he reacted badly. Kenya tells him that “that is not a good thing because she doesn’t want to see him become that person.” Kenya wonders why they have to be so loud at the commercial shoot.

Cynthia is very pleased with Kim’s work on the commercial and feels that she made the right decision in choosing her over Kenya. Peter also comments on what a wonderful job Kim did on the shoot and everyone hurries to leave before the storm rolls in.

The wrap party begins and Porsha introduces Oliver to the group. Everyone tells Cynthia how proud of her they are. Kenya arrives at the party to a chilly reception. She says that “the best thing about all this craziness is that she has gotten to know Matt a lot better.”

The ladies are sitting down talking and they ask why Matt is sitting alone and Kenya tells them that Matt was upset about the “hazing” that he had to endure from the other men. She tells them that “he felt that the men were kind of making fun of him because of his age. “ She then tells the girls that he is 28.

Cynthia thanks everyone for participating and tells Kim what a wonderful job she did on the shoot. Kim mentions her husband Chris and the girls are being nice about him despite the fact that they talked about him being gay. Cynthia decides that she doesn’t want to be apart of the fakeness and tells Kim what the other girls were saying about her husband.