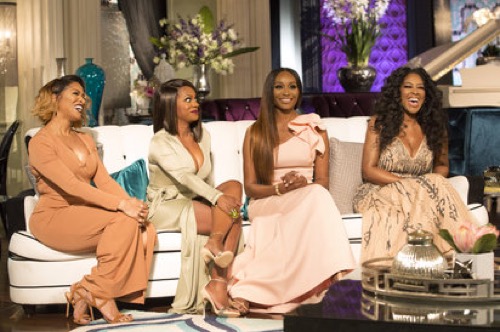 Tonight on Bravo The Real Housewives of Atlanta (RHOA) continues with an all new Sunday March 20, season 8 episode 18 called, “Reunion Part 1,” and we have your recap below. On tonight’s episode, tensions rise between Kenya Moore and Phaedra Parks when Kenya accuses her of being the ultimate shade thrower.

On the last episode after leaving Apollo’s prison visit, Phaedra looked to the future by throwing a lavish holiday party. Kandi doesn’t know who to trusted after the Feds come to her home looking for Apollo’s assets. Cynthia and Peter were caught by surprise when her daughter Noelle interrupted their unconventional date night. Did you watch the last episode? If you missed it, we have a full and detailed recap right here for you.

On tonight’s episode per the Bravo synopsis, “tensions rise between Kenya and Phaedra when Kenya accuses her of being the ultimate shade thrower. Kandi and Phaedra address their deteriorating relationship but with new grievances in the mix, will these two ever be able to put the past behind them and move forward? Shereè joins the ladies to discuss her experience returning to the show, and Kenya and Kim go head-to-head when they confront their rocky relationship.”

This week on part one of The Real Housewives of Atlanta reunion the ladies sit down to discuss their issues. They show clips of the ladies engaging in battles. They read emails from the viewers. One of which talks about Phaedra’s impersonation of Kenya. The host asks the ladies who gave the best shade this season. The ladies answered with Phaedra. He then asks them who needed more time in school and the ladies said Kim. He then asks if Phaedra really called Kenya “Oatmeal pie face.” Phaedra admitted that she said it. Kenya gets very upset and tells Phaedra that she is “Insulting a whole group of people and it isn’t right.” Phaedra tries to apologize and Kenya says “You need forgiveness. She then tells the ladies that her hair care products will be out in stores in a couple weeks.

They then move on to talk about Kandi and Todd and the arrival of their baby. They show clips of their struggles throughout the pregnancy and opening the new restaurant. Kandi is joined on stage by Todd and they talk about how baby Ace has changed their household. Todd responds to a viewer email asking about Todd’s leaving the Drs. office while they were worried about the baby being in trouble. They also talk about Kandi’s breast feeding posters and Kandi says “It’s better to let them know what really goes on.”

Sheree joins the ladies on stage and they ask her what it was like being on the show after all of these years. Sheree says “It was great. I made some new friends and met up with some old friends.” She was then asked about meeting Porsha and Sheree says “It was an experience.” They also ask her about what fans say when they meet her. She tells them “They ask about me being aggressive.”

Kim is up next and they ask her about whether or not she brought her kids. She says “No, because I didn’t want to hear anyone’s mouth.” They then ask her if she thought she fit in with the group. Kim says “I’m not sure that I fit in with this group.” Perez asks the ladies if they thought she fit in. Most of the ladies said that she didn’t really fit in. Phaedra says “This group is all about dealing with conflict and Kim did not deal with conflict very well at all.” They move on to talk about the trip to Washington. Kim says that “It was presented as a trip that would be fun and educational for children.” Porsha says “Maybe Kim should’ve done what Phaedra did and hired a sitter.”

Next up they talk about Kandi and Phaedra’s friendship. They show clips of their issues during the season including the issue of the money Phaedra paid or didn’t pay for the pregnancy video that he shot. They ask about the status of the friendship between the two ladies. Phaedra says “After the baby was born I reached out to her and asked if there was anything she needed and Kandi asked me for a chicken salad.” She also says “I have done everything that I can to reach out and make things better.” An email is read asking about the reason Phaedra never confronted Kandi about the fact that her ex husband had stored some of her stuff at their house. Kandi gets upset and tells Phaedra “It was never a secret. I wasn’t trying to hide things from her. I assumed that she knew.”

They then asked about the fact that Phaedra hadn’t paid Todd in full for the pregnancy video that he worked on. Phaedra tells them “Todd has been paid in full, but I had to take the video the people who had distributed my other videos and they have to reedit it and fix some things.” Kim lets it be known that they just finished their business last week and Kandi says “How convenient.” They move on and refer to Kandi’s group of friends; known as “The Kandi Coated Clique.” Kandi admits that it’s true that she and her friends cliqued up pretty quick and Porsha mentions an argument in which Kandi’s friends ganged up on her. She also says “In another room Todd was talking about me to Peter.”

When they come back Kenya and Kim get into a heated argument about the fact that Kenya has never gotten physical with anyone.” Paris asks if Kim is texting during the reunion. Kim says her husband was “Asking about the puppy food.” They then move on to talk about the heat between Kim and Porsha. They ask Kim where she would place Kenya as an actress on a scale of one to ten. As Kim is answering the question Kenya interrupted and tells her “You made it personal and you need to remember that I brought you into this group.” Kim goes on to try and get her point across but Kenya would not let her. Another email asks Kim to try and explain the comparison of her careers to Kenya’s. Kenya jumps in and says “She has come into the world in which I am a star. So in comparison to me in this arena I am above her.” Kim says “I will let social media have fun with that soundbite.”

When they return they ask Cynthia “If Kenya was pitching an idea to Spike Lee would she have missed the meeting?” Cynthia says “No, she would have been there thirty minutes early. They then address Kenya’s behavior in Jamaica and Kenya says “I apologized to Kim after the incident.” Kim says “I also apologized to her.” Kenya blurts out “You never apologized to me for anything.” Porsha jumps in and tells Kenya that she was “Wrong.” Cynthia tells Kenya that “These types of things sometimes get physical and sometimes they don’t. You never know what can happen.” Cynthia says “I felt like Kim handled herself well. I addressed Kenya’s behavior both on and off camera.”