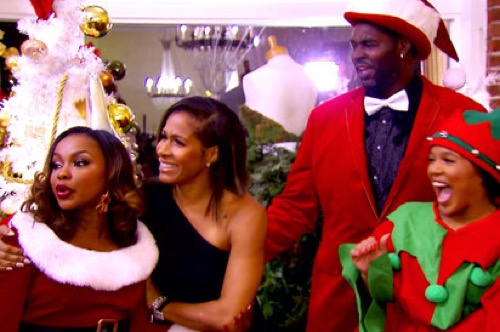 Tonight on Bravo The Real Housewives of Atlanta continues with an all new Sunday March 13, season 8 episode 17 Finale called, “Who’s Been Naughty Who’s Been Nice,” and we have your recap below. On tonight’s episode, after leaving Apollo’s prison visit, Phaedra Parks looks to the future by throwing a lavish holiday party. Kandi Burruss doesn’t know who to trust after the Feds come to her home looking for Apollo’s assets.

On the last episode after working on Cynthia’s “mercial,” Kim was determined to move her directing career forward while avoiding any more drama with Kenya. Kenya’s Aunt Lori grills her about her new boyfriend, leaving her conflicted about pursuing a future with a younger man.  Did you watch the last episode? If you missed it, we have a full and detailed recap right here for you.

On tonight’s episode per the Bravo synopsis, “after leaving Apollo’s prison visit, Phaedra looks to the future by throwing a lavish holiday party. Kandi doesn’t know who to trust after the Feds come to her home looking for Apollo’s assets. Cynthia and Peter are caught by surprise when her daughter Noelle interrupts their unconventional date night.

Porsha begins the journey to preserve her fertility, meanwhile Kenya’s family begins to grow when her boyfriend Matt surprises her with two new babies of their own. ‘Tis the season for friends, family, shade, and good cheer at a Christmas bash that brings everyone together for a final showdown.”

This week on the season finale of Real Housewives of Atlanta Phaedra hires a party planner to throw a smash holiday party.

Kenya goes to visit Phaedra and Phaedra tells her about the party. She tells her that she is thinking about having a dance number and maybe doing some clog dancing.

Todd and Kandi go to visit his mom’s grave at the cemetary. As they stand at the grave marker Kandi says “Sharon you have a grandson coming and we are going to give him your last name as a middle name. As they stand there and talk about what Tony’s mother meant to him their baby kicks.

Kenya tells Phaedra that the Feds go to Kandi’s house to confiscate Apollo’s belongings to collect on the restitution that he owes them. Phaedra doesn’t seem to phased by this news and Kenya asks her if she “dropped a dime on kandi.” Phaedra laughs and tells her that she had nothing to do with it. Kenya then asks if Kandi had called and told her about the drop in. Phaedra says that she was “out of town and had not heard from Kandi.”

Kenya’s boyfriend Matt shows up and surprises her with bringing home the two puppies from the breeders. Kenya is very happy and says “This is another reason that Matt looks like a rock star in my eyes.” She decides to name one of the dogs King. Kenya then mentions Phaedra’s holiday party and asks him to help her pick out an outfit for the party. Kenya worries that there will be drama at the party between Phaedra and Kandi because of the call to the feds. Kenya says “Maybe I should go for a small costume.” Matt laughs and says “That might be a good idea.”

Cynthia is planning a special massage for her husband Peter. When Peter arrives home Cynthia tells him “I have a very special massage planned for you.” Peter is very excited and tells her ” I’m gonna take everything off right here,” Cyntha laughs and leads him upstairs where the massage table is set up.

Peter is very happy As he is enjoying the intimate massage and he and Cynthia are about to become intimate they are interrupted by Danielle, who was supposed to have left an hour before to visit her father. Cynthia and Peter are both slightly embarrassed.

Porsha goes to see a fertility specialist. She is worried that she won’t be able to have children the way her sister Loren and Kandi are having. She says “Now is not the time for me to have a baby but I want to make sure that when I am ready I will be able to.”

The nurse asks about her medical history and Porsha tells her that she has had Fibroid tumors. Porsha worries that she won’t be able to carry a child and tells Loren that “If I have tumors you may have to carry the baby for me.”

The Dr. comes in and tells her that she does have a couple of tumors, but nothing as serious as what she had the last time so no surgery is needed. The Dr. tells her that she is at a prime age to have children who are healthy, but that she doesn’t have to do it right away. That makes Porsha happy and they leave the office.

Dwight is meeting with Phaedra about planning the Christmas party. They came up with a Winter Wonderland party theme. She says ” I am going to send the girls a text so that they will be here on time.” Dwight laughs and says “That will be a new concept for them.” He then tells her “Well I will be here on time whether they are or not.” Phaedra laughs. She says “This party is to celebrate the birth of our Lord as well as the closing of one chapter of my life and the beginning of another.”

The night of the party Phaedra dresses her sons up as little elves Sheree’s ex husband Bob dresses up as Santa for the party. Kandi is upset and worried about her relationship with Phaedra because of the feds coming to her house to seize Apollo’s assets. All of the girls arrive and the party begins. Phaedra is playing hostess.

Nene arrives and Kandi is upset about her being there because of their issues in the past. She says ” I was with Cynthia and Kenya, and we all went out to eat. She spoke to Cynthia, but not the rest of us.” Everyone is laughing and having a good time when Sheree confronts Tammy about the rumors that Tanny slept with Bob in Miami. Bob says “Me and Tammy are just friends.

Kenya shows up dressed as the Grinch. Bob and Sheree decide to put the mess with Tammy behind them for the night. Todd and Peter are talking about that Phaedra owes him and he tells Peter “I am over that mess. I have decided to let it go.”

Nene and Kandi sit down to talk. Nene says “I don’t know what happened to Kandi and I but we have slid down a slippery slope.” The two women decide to make peace and move forward with rebuilding their relationship. Kim also approaches Kandi and lets her know that she will be there to help her raise her son.

Porsha brings up the raid at Kandi’s house. Nene asks her about the raid and Kandi tells her that the feds wouldn’t even let the delivery men who were delivering supplies for the baby out of the driveway because they thought they were taking away Apollo’s things. Kandi says “I am going to keep Phaedra at a distance until I know whether we are really cool or not.”

Porsha continues to fan the flames by asking Cynthia and the other ladies if they thought Phaedra called the feds to the places where Apollo’s property was hidden because she was jealous or upset. Phaedra excuses herself to introduce the dancers.

Cynthia says “It is not easy to hang with this group of ladies because there are always some issues and fallout, but I love the sisterhood I have with them.” Everyone has a great time and takes a group shot to commemorate the party.