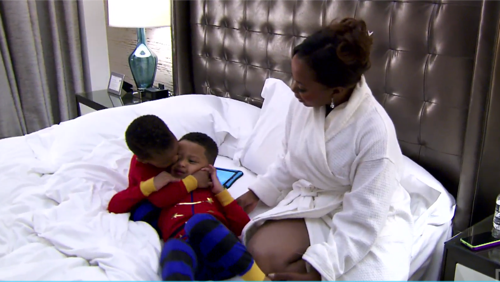 Tonight on Bravo The Real Housewives of Atlanta continues with an all new Sunday March 6, season 8 episode 16 called, “Turning Over a New Peach,” and we have your recap below. On tonight’s episode, after working on Cynthia Bailey’s “mercial,” Kim Field is determined to move her directing career forward while avoiding any more drama with Kenya Moore.

On the last episode, in the aftermath of the rumors regarding Kim’s husband’s sexuality, Phaedra and Nene offered her some advice on how to stand up against the accusations. Meanwhile, back in Atlanta, Kandi and Todd struggled to convince a hesitant Aunt Bertha to take part in their family restaurant idea. Were they ever be able to get her on board with the rest of the gang? Did you watch the last episode? If you missed it, we have a full and detailed recap right here for you.

On tonight’s episode per the Bravo synopsis, “after working on Cynthia’s “mercial,” Kim is determined to move her directing career forward while avoiding any more drama with Kenya. Kenya’s Aunt Lori grills her about her new boyfriend, leaving her conflicted about pursuing a future with a younger man. Meanwhile, Porsha struggles to keep the photo shoot for her new lingerie line afloat without her sister/assistant Lauren to help.

Kandi, Todd, and Mama Joyce find themselves in the doctor’s office discussing how many carats the “push gift” should be. Finally, Phaedra embarks on an emotional trip with her two sons to visit Apollo for the first time since his incarceration.”

This week on Real Housewives of Atlanta Kandi and Todd head to the Dr. for a checkup on their son. Kandi says “I’m hoping that God gives a lot of Todd’s features to our son.” The Dr. tells them that it is ok for them to have sex but tells that she wouldn’t recommend that they have sex in the missionary position. She tells them instead to “Try it on the side and up against the kitchen sink.” Todd is a bit disturbed to be having this conversation with Momma Joyce in the room.

Kim is Skyping with her manager Art and he tells her about some new business opportunities. Art asks if she will work with Kenya and Kim tells him that “She doesn’t have time for people who engage in such blatant negativity.” Kim also feels that she can’t “take her professional relationship seriously when working with Kenya.”

Phaedra has her lawyer over and the lawyer tells her that they have filed her divorce and they are waiting for Apollo to accept the papers. The lawyer tells her “If Apollo doesn’t accept the papers then they will have to have the sherriff serve him because process servers are not allowed in federal prisons.” They talk about taking the children to see Apollo in prison and Phaedra tells her that she is more comfortable taking the children to visit Apollo at Fort Dix because it is less like a prison.” Phaedra feels that to expose her sons to the sound of clanking doors and bars would be a traumatizing experience. The lawyer asks her “When are you going to tell the children?” Phaedra says “I will wait until we get there in case something happens and we can’t get in.” The lawyer tells her that is a good idea because visits can be cancelled.

Kenya and Matt are surveying her new house. She says that Matt wants a parking space at the house. Kenya tells him “You have to put a ring on it first.” Kenya’s Aunt Lori shows up and Kenya introduces her to Matt. They give Lori the tour of the house. Lori says “The house is great, but I want to know about Matt.” Kenya says “I am trying to take it slow this time because I have always rushed into things.” Lori asks if she likes him. Kenya laughs and says “Yes.” Kenya is thinking that Matt could be the one. Lori says “Everything is a crapshoot as long as you don’t run him off.” Kenya laughs again and says “Not today.”

Porsha and her sister Lauren meet up to discuss the Naked photo shoot Lauren is getting ready to go on maternity leave so she is trying to prepare Porsha for the shoot without her. They are on the phone with the photographer and he tells them “You don’t want to many big booty models.” He tells them that they have to decide whether or not they want to market their lingerie to a broader market. Porsha says “Not everyone can be a size two.” She also tells him that “Bigger bodies are beautiful as well.”

Kim and Cynthia meet up so that Kim can show her the commercial now that it has been edited. Kim says “ I am pleased with the commercial and more importantly I am pleased with the way that my career is going.” Cynthia loves the work that Kim has done and thinks that she should do the voiceovers. Cynthia asks Kim if she has talked to her husband about the rumors that were brought up in Jamaica. Kim said that they “laughed about it.” She then asks about where Kim and Kenya are in their relationship and Kim says “She is ok with not being friends with Kenya.”

Phaedra goes to visit Kandi at home. Kandi asks about the trip. Phaedra tells her about the confrontation between Kenya and Kim. She also tells Kandi that Nene showed up and she and Cynthia are friends again. Phaedra also tells Kandi that Sheree and Nene have sort of become friends. Kandi asks Phaedra about her family. Phaedra tells her that everyone is well. She doesn’t tell Kandi about possibly taking the kids to see Apollo in prison because “They have been in my business too much.” Kandi asks if Phaedra talks to Apollo and she responds that “He calls so yeah.” Kandi then asks if the kids know where Apollo is. Phaedra says that Aiden knows he is in jail.

Porsha shows up on the day of her photo shoot and greets everyone. She has chosen Cynthia to model her lingerie. Cynthia says that she and Porsha have an interesting relationship. Porsha is upset that Lauren is not able to be there after all the work she did to help plan it. Porsha is upset when she realizes that they have lost the light outside. She tells Cynthia that they are going to change her photo shoot to have Cynthia in the house and “dropping rollers as she walks down the hall.” Porsha is extremely pleased with the way Cynthia does on the photo shoot.

Phaedra is taking the boys to Phillidelphia to see Apollo. Her mom asks when she plans to tell the boys where they are going. She tells her “When we get there.” Her mom tells her that is a good idea in case they don’t get in. They worry about how the boys will behave after they see Apollo because “They won’t understand why they have to leave their father.”

Kenya and Matt go to the Melting Pot for dinner. Kenya is amazed because she has never been to a Fondue restaurant. Matt asks her how she feels about coming out to eat and having to do the work a bit. Kenya says “I am always up for new experiences.” The two of them sit down and talk about the future. Kenya asks if Matt wants children. He says yes. She then asks him how long he wants to wait and he tells her “A year or two would be ideal.” Kenya is happy to hear that and tells him “I am no spring chicken and I have already started the process to help me get pregnant.”

Phaedra is getting ready to take the children to see Apollo at Fort Dix. The kids are excited to be in a different city even though they have no idea where they are going. Phaedra is nervous about taking the kids to visit their dad, but she knows she has to do this “In order to close this chapter of her life.” When Phaedra and the boys come out her mother asks how the visit was. Phaedra says it was “interesting.” She asks Aiden “How he liked his daddy’s hair?” Aiden says “I didn’t like it.” Phaedra says that when she brought up the divorce Apollo says that “He didn’t want a divorce but she is “ready to move on and possibly get remarried.”