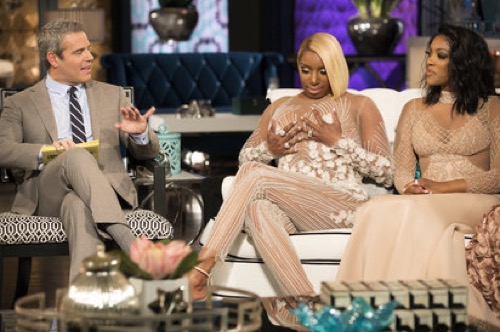 Tonight on Bravo The Real Housewives of Atlanta continues with an all new Sunday April 3, season 8 episode 20 called, “Reunion Part 3,” and we have your recap below. On tonight’s episode, the ladies rehash the drama of Jamaica from the ups and downs surrounding the execution of Cynthia Bailey’s commercial to her downplaying her relationship with Kenya Moore to the group.

On the last episode Phaedra reflected on the emotional season she’s undergone with her husband Apollo away at prison and the effect it’s had on her life. Did you watch the last episode? If you missed it, we have a full and detailed recap right here for you.

On tonight’s episode per the Bravo synopsis, “the ladies rehash the drama of Jamaica from the ups and downs surrounding the execution of Cynthia’s commercial to her downplaying her relationship with Kenya to the group. In a special appearance, NeNe Leakes gathers with the women to weigh in on the drama and to address the group’s concerns surrounding Porsha’s anger management issues.

Shereè and NeNe reflect on their shaky past and where their friendship stands today. The men join the conversation to give their opinions on the plethora of hot-button issues including unsettling allegations surrounding Kim’s husband, Chris.”

This week on part three of The Real Housewives of Atlanta Reunion Nene joins the women on stage. Everyone is amazed by Nene’s outfit. The host says “The last time we saw you at the reunion you were in a different head space.” They show a clip of Nene at the last reunion. He asks Nene “What made you want to come back?” Nene says “The housewives show is my baby and I couldn’t just let these young ladies have it.” He then asks Kandi how she feels about Nene being back. Kandi says “I wondered why she wanted to come back. I thought she was done with us.”

They then talk to Sheree and ask her if Sharee had “Fixed her face.” Nene laughed and said “Yes she has.” He then asks Nene had “Fixed her body.” Both women laugh again and Sheree says “Yes she has.” Sheree then says “We were always friends. I know Nene’s secrets and Nene knows mine. We were always friends and it’s not a good idea to let things that happened four or five years ago get in between us.”

They move on to talk about Nene’s return in Jamaica. He asks Cynthia “Why did you deny your friendship with Kenyboth a when Nene came back?” Cynthia explains that she and Nene had fallen out and hadn’t spoken for a couple years. She says “I like Kenya, but Nene and I had been friends for a long time and it was good to be home.” Andy then asks Nene about her relationship with Kenya. Nene says ” There were times where I just wanted to snatch Kenya up, but we have come to a much better place.” Phaedra gets upset and says “Can we get a shovel for all of the manure that is being spread around out here?” Andy tells her “I have been sitting in this position for a long time and the manure comes from both ends of the couch.” Kenya also tells them “Nene and I have a lot in common with the situations with our mothers. When Nene had her breakdown no matter what had happened before I comforted her.”

They then move on to talk about the way the ladies dressed in Miami. Phaedra tells Kim “You are fake because you sat there and downed them for the way they dressed in the clip and now you are coming out here trying to defend it.” Kim defends herself by saying “It isn’t so much about defending the behavior as it is addressing the difference in the culture. You have to look at social media and videos and see women dressed like that being disrespected. Andy then asks Nene about the changes in Kenya. Nene says ” I don’t care either way. I just wanted to know what her deal was.” Kenya then gets upset and tells Nene “I am out here being called all kinds of names because I like to wear thongs just like everyone else on this couch.

The men join the ladies on stage. Andy asks Matt if he is “In love with Kenya.” Matt says “Yes I am.” Andy then asks Kenya if she is in love with Matt. Kenya says “Yes I am. He is a great friend and lover.” Nene says “I am happy for Kenya. She needs and deserves love.”

They move on to address the rumors about Kim’s husband Chris. Andy asks Chris what his reaction is to the rumors. Chris says “I am a performer and accustomed to people talking about me. I am a man and my wife knows that.” Andy asks Kim to explain what she had written on her blog about Kenya needing to get help. Kim says “Kenya lied when she said that Chris is gay.” Kenya says “I did not spread the rumors. I simply brought up the fact that they were out there.” Chris asks Kenya “Who are our mutual friends that call me Chrissy.” Kenya says “Google yourself and find out.” Chris asks her the question again and Matt steps up and says “She answered your question.” Chris says “I wasn’t talking to you.” Matt tells him “I was addressing you.” The argument gets a bit heated and Andy tells them “It seems as though there was a lot of gay bashing on the show and it was mean and unnecessary.”

Chris says “Those who are going to sincerely apologize have.” Andy asks who apologized and Chris says “Everyone but Kenya.” When Andy asks “Why haven’t you apologized?” Chris interrupts and says “She is a terrible person.” Kenya offers an apology and Andy asks how that was. Chris says “Awful.”

Andy moves on to talk about the situation with Phaedra, Kandi and the feds. Andy asks what it was like when the feds showed up at Cynthia and Kandi’s homes. Phaedra says “First of all I would never call the feds on anyone, especially someone I called my friend because it has happened to me and my husband.” Kandi says “At the time I wasn’t sure whether she had done it or not because we were not in a good place.”

Phaedra says “The fact that you would think I would call the feds on a pregnant woman lets me know what you think about me.” Kandi just shrugs her shoulders and says “Ok I am not going to deny that I thought it.” Andy then asks Todd if he thought Phaedra called the feds. He says “Yes because of her ways.” Phaedra asks him “What ways?” Todd points out that Phaedra lied about how much money she paid him for the video. Phaedra gets angry and tells Todd. “You were out drinking with my husband.” Todd fires back “You know so much about what I do, but Apollo lived in your house and you had no idea what he was doing.” The argument gets more intense and Kandi jumps in to defend her husband. Kandi says “This is what you do. You always try to tie up loose ends at the last minute.” The husbands leave the stage.

They then air a clip of an altercation that Porsha was involved in that didn’t make the show. Andy asks why Porsha and Jamie fought. Porsha says “It just got to the point where there was a lot of disrespect being thrown around.” Nene makes comments under her breath. Porsha says “I don’t want to continue to talk about this if she is going to continue to be disrespectful.” Nene tells her “As long as you are in front of the camera you are going to be judged.”

Cynthia tells her “You can’t put your hands on anyone else anymore.” Kenya tells her “Some of the women are afraid to be around you because you have had to be restrained because you were acting like a wild animal.” Phaedra says “After the Christmas party” Andy asks if anyone is uncomfortable confronting Porsha. Kandi is quick to speak up and says she is uncomfortable. The ladies once again get heated. Porsha says “I will not sit here and be vulnerable and dissected.”

Andy asks her what she has learned. Porsha says “I have gone to anger management to learn how to deal with people who start things with me.” Cynthia tells her “The fact that you are blaming everyone else for your mistakes shows that you haven’t been cured of your anger.” Kim congratulates Porsha on getting help for her problem. Porsha thanks Kim for her acknowledgement of he progress and says “I am still a work in progress.”

The reunion concludes with Andy asking Sheree if she is happy to be back.Sheree says “I am. I made some new friends and reconnected with some old ones. Kim says that her time on the show has helped her find elements of herself. Cynthia says that “My eyewear line is doing well and I am just working on me.” Phaedra says “This has been difficult and I knew it would be because we are rehashing stuff that has already happened, but I am glad that we did it and we have to stay positive.”