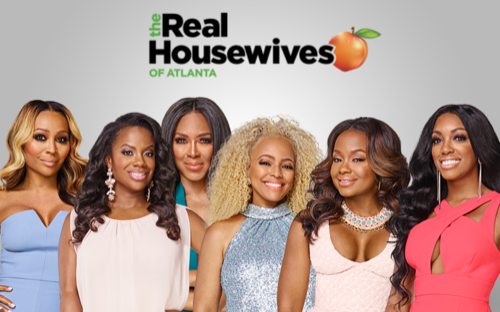 Did you watch last season’s RHOA finale where the Georgia peaches continued to throw shade with never-before-seen footage from Season 8 including Porsha and Phaedra’s makeover of Kim, as well as juicy moments from Peter and Cynthia’s video-gate drama? If you missed it and want to get caught up before tonight’s episode we have a full and detailed The Real Housewives of Atlanta recap, right here.

On tonight’s The Real Housewives of Atlanta episode per the Bravo synopsis, “Kandi and Todd focus on parenting baby Ace in the Season 9 premiere. Also: Kenya and Sheree make progress in completing their dream homes; the ladies raise questions about Porsha’s anger and an uninvited guest might mar Kenya’s housewarming celebration.”

The ladies of Real Housewives are back in Atlanta for another season of having fun and throwing shade. This week on the season premiere of The Real Housewives of Atlanta Kandi and Todd are playing with Ace when he first wakes up. Kandi says “Ace has fulfilled my dreams of having another baby and if he is the last one I am ok with that.” They take the baby into the bathroom and try to put him on the potty. Todd asks Kandi “Do you want me to make him a bottle? It is kind of like making him a drink.” Kandi laughs and tells him “I can’t believe that you are comparing making a bottle to making a drink.” Todd makes the bottle and feeds Ace.

Kenya has moved into her new house even though it is not completed yet. She says “With everything that is going wrong with my life right now, especially with me and Matt I am determined to get this right.” She talks about her breakup with Matt. Kenya says “When we were in Mexico Matt didn’t know who I was texting. He checked my phone and got really angry. Then he started throwing my things all around the room and completely lost control. I broke up with him.” Porsha is talking to her builder Les. She tells him “I want to get this done in two weeks.” Les tells her “I don’t think that is going to happen. We still have a lot of work to do.” Porsha is not happy to hear this. She tells him “Let’s get to work.”

Sheree is building her own house just a few houses down. She is working with her ex-husband Bob. She says “Bob and I are just friends. We are working on rekindling our friendship, but if he wants to win back my love he has a long way to go.” The two are going on a walk through of the house. Bob is impressed with the master suite. They move into her son’s room and Sheree says “People describe my son Kyle as a sex symbol, but I still think of him as my little boy.” They move on to her daughter’s room. She says “She is the more organized and mature of the two.” After they head back downstairs Sheree asks Bob “How soon can I move in?” Bob tells her “I think you can move in in about six weeks.” This does not please Sheree at all.

Porsha stops by Phaedra’s house and her son opens the door. Porsha brings both boys gifts and Phaedra sends both boys into the other room. Porsha tells her “You have that divorce glow going on.” Phaedra says “I’m ready for that hard love.” Porsha laughs and asks her “Are you ready to start dating again?” Phaedra says “I’m not sure. I’m worried about this online dating.”

While the two ladies are talking the doorbell rings. When Phaedra opens the door she is presented with an invitation to Kenya’s housewarming party. She asks Porsha “Are you going to go?” Porsha says “Probably not. I don’t think I was invited.” Phaedra says “Well I want you to be my plus one so check your calendar and let me know.”

Cynthia has decided to file for divorce from Peter. She goes to meet with a lawyer to discuss what needs to be done in order for her to file for divorce. The lawyer asks if they have a prenup. Cynthia tells him “Yes we do.” The lawyer then tells her “The prenup is null and void if the divorce is caused by issues of infidelity or abandonment.” Cynthia tells him “There was no infidelity or abandonment. It is really just me.” She then asks him “Should Peter be here? I want him to hear everything from you.” The lawyer tells her “Yes. I would be happy to talk with him.”

Kenya is stressed out over whether or not her house is going to be ready on time or not. She tells Les “I don’t want Sheree coming over here and nitpicking about any little thing. Will it be ready?” Les assures her that the house will be ready on time.

Porsha is continuing her anger management therapy. She tells her therapist “In middle and high school I was bullied so bad that I wanted to commit suicide. Meanwhile, my brother was super popular.” The therapist tells her “You have to learn to control your own emotions around people who may trigger you. Next time you come in I will give you some tools to help you cope.” Porsha is open to receiving the help to cope with her anger.

Sheree is walking through her house with her daughter. They are discussing some interior decorating ideas when her phone rings. Kenya is calling to invite her to her housewarming party. Kenya says “I would have happily sent Sheree an invitation by horse and carriage, but I didn’t know where to send it. I have no idea where she is living. It certainly isn’t at her house.” During the call Kenya tells Sheree “By the way I won the bet.” Sheree tells her “No you didn’t. The bet is for Christmas. If I don’t move in by Christmas then you win and if you don’t move in by Christmas then I win.”

Cynthia calls Peter and he tells her “I am with my new girlfriend.” He asks her “Why are you calling me? I am with my new girlfriend.” Cynthia tells him “I was just calling to ask you where the prenup is.” He tells her “Ask your mother where the prenup is. It’s probably in the same place that the marriage license is.” Cynthia is very upset. She tells him “I’ll call you if I find it.”

The day of Kenya’s housewarming arrives and she is still a bit frantic. While a lot of progress has been made there is still a lot of stuff to do. Kenya has managed to get a new driveway put in place, but she is still trying to deal with the cosmetic issues. While she is inside Cynthia shows up. Kenya is frazzled. She tells her friend “I’m trying to get it together.” Cynthia asks her “Do you want me to help?” Kenya tells her “Yes, I would appreciate it.”

Kenya and Cynthia are sitting in her bedroom. There is a gift from Matt. Cynthia asks her “Is he coming tonight?” Kenya starts to cry. She says “When I bought this house I didn’t have him in my life. He helped me develop and love this house. Now he’s not here.” Cynthia tells her “Don’t worry about it. This is your dream house no matter what happens. I’m going to go downstairs and entertain your guests.”

When Sheree and her friend Gregg get there she is nitpicking about the driveway. She says “I could’ve worn my tennis shoes.” Once inside the house, Sheree tells Cynthia “I need to find the air conditioning. I am dripping.” Kenya finally comes downstairs to greet everyone. She is talking to Sheree. She tells her “I love my house and it didn’t take five years.” This stops Sheree in her tracks. She tells Kenya “It hasn’t taken five years and your living room is the size of my master suite.” Cynthia quickly steps in asks “Who did you invite?” Kenya says “I invited Kandi and NeNe. NeNe can’t make it because she is in Miami. I also invited Phaedra.” Cynthia asks her “Did you invite Porsha?” Kenya says “No. I wanted to feel safe in my own home.” Kenya takes everyone on a tour of her home. Sheree says “