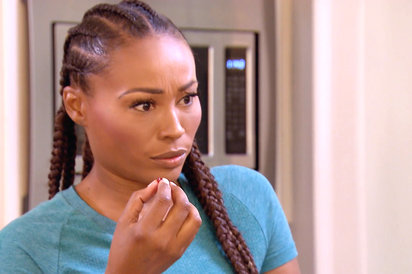 Did you watch last season’s RHOA finale where Kandi and Todd focused on parenting baby Ace in the Season 9 premiere. Also: Kenya and Sheree made progress in completing their dream homes; the ladies raised questions about Porsha’s anger? If you missed it and want to get caught up before tonight’s episode we have a full and detailed The Real Housewives of Atlanta recap, right here.

On tonight’s The Real Housewives of Atlanta episode per the Bravo synopsis, “Another unexpected guest pops up. Cynthia is forced to deal with the impact her marriage has had on her daughter and comes face-to-face with Peter. Kandi and Todd juggle launching an Ace-inspired product line and construction of their new restaurant. Momma Joyce gets the rumor mill going about why Phaedra’s divorce is dragging on. Porsha plans a girls outing.”

On this week’s episode of Real Housewives of Atlanta Kenya’s housewarming party continues and Kenya is not happy to see Porsha when she comes downstairs from giving the ladies a walk through. Cynthia asks her “Isn’t it nice?” Porsha says “It looks like it is coming together. It has walls and everything.” Kenya takes Porsha outside and tells her “I don’t want to make this an uncomfortable confrontation, but I didn’t extend an invitation to you because of some things that had happened in the past and I would appreciate it if you left.” Porsha handles it well and tells Kenya “Ok. That’s fine.” She and Phaedra head out together. Sheree decides to leave with them.

As the three ladies are leaving they encounter Matt coming up the hill to the house. Everyone is concerned about how he will behave. Kenya asks him “Do you want to go talk?” Matt says “Yes, I would.” Cynthia says “I thought Kenya was trying to move on, but apparently not.” Matt and Kenya move off to talk.

Matt starts out by telling her “I guess I should start off by saying I’m sorry.” Kenya says “You scared me. You were supposed to be my protector and to have the person who is supposed to protect you violate that is terrifying.” Matt tells her “I never wanted to scare you. I know my yelling frightened you and that was never my intention. My bad behavior almost cost me my queen.” Kenya seems happy with the apology. Matt asks her “Does this mean that we can work on it?” Kenya says “Yes.”

The next day Cynthia is talking to her daughter Noelle. She tells her “I spoke to a lawyer about a divorce.” Noelle tells her “You seem a lot happier since this whole thing started.” Cynthia says “You could tell I was unhappy?” Noelle tells her “It honestly made me question whether or not you had low self-esteem.” Cynthia is absolutely shocked to hear this. She realizes the impact staying in the marriage has had on her daughter. She hugs Noelle and apologizes to her.

Kandi and Todd are working Ace’s product line. Kandi’s mom walks in and they commence to talking about the plans for the restaurant. Kandi is not happy because the contractor is dragging their feet on the construction. They move on to talk about the housewarming party. Joyce asks them “How was the housewarming?” Kandi tells her “Kenya put Porsha out of her house.” Todd says “You can’t invite someone to your house and put them out.” Kandi tells him “Kenya did not invite Porsha. She was Phaedra’s plus one.” Joyce goes off and says “They need to understand the depths Phaedra will sink to. She needs to be sharing a cell with her husband!” Everyone laughs.

Phaedra and Kenya meet up to have lunch. Phaedra tells her “You look happy.” Kenya tells her “Matt and I are doing great and I am happy.” Kenya asks her “What about you?” Phaedra tells her “I’m not rushing it. I want to make sure that I am divorced.”Sheree meets up with Porsha. Sheree asks her “How did you feel with Kenya throwing you out of her house the other day?” Kenya says “I don’t really care. I am doing what I need to do.”

Sheree meets up with Porsha. Sheree asks her “How did you feel with Kenya throwing you out of her house the other day?” Kenya says “I don’t really care. I am doing what I need to do.”
Phaedra tells her “Kenya is having an event and she wants to invite all of the ladies, even you. Will you come?” Kenya is skeptical about attending this event. She says “Let me get back to you when I get the invitation.” Sheree and Porsha are talking about the same event. Porsha tells her “I am inviting everyone, including Kenya.” Sheree seems shocked by this. Porsha tells her “I didn’t invite her just to kick her out!” Both women laugh.

Kandi and Todd take Joyce and her aunt Bertha on a tour of the restaurant even though it is not completed yet. Todd shows them where the bar will be and that there is a space for live entertainment. He tells them “We may have a live Jazz band.” Kandi tells Joyce “You can be one of the OG’s.” Todd then asks Bertha “What do you want to do in the restaurant?” Bertha says “Nothing.” Todd says “I thought we could have you bake a cake once in awhile.” Bertha tells him “No.” Then she asks him “How are we going to get paid from this thing?”

Todd says “I figured I would let you two figure that out.” Kandi says “I want us all to make some coin, but first we need to get out of the red.” The ladies meet up at the Brazilian wax place. Cynthia says “Since no one is trespassing on my grass my lawn doesn’t need mowing anytime soon.” Kenya is showing the ladies pictures of the chairs she is ordering for her house. Kenya says “Sheree has been talking trash about my home. She needs to keep her mouth shut because her house is in her mother’s name. It shouldn’t be called Chateau Sheree, it should be called Chateau Thelma because Sheree is trying to dodge the IRS!”

Cynthia meets up with Peter. She tells him “You need to call the lawyer because he needs to talk to you.” Peter tells her “I know. It is just not a high priority for me right now.” He tells her “I went to the hospital the other day and they asked me who to call in case of an emergency. It hit me that it can’t be you anymore.” Cynthia tells him “That’s not true. I still care about you even though we are getting a divorce.” Peter is very emotional as he pulls out his phone and calls Cynthia’s lawyer. He tells him “Send me whatever you need to send me and I’ll sign off on it.” Cynthia thanks him and tells him “You look good. Have you been working out?” Peter laughs.

The ladies arrive at Porsha’s event at the Escape Room. Tensions are high between Kandi and Phaedra as they are the first two to arrive. The six ladies are split into two teams and lead to the back where they get ready to play. Kenya says “As long as Porsha is not assigned to find the underground railroad we should be fine.”

The two teams get to work on the mysteries in their respective rooms. Neither team is able to solve their mystery room. After the event is over Kenya approaches Sheree and says “We are going to start a new project called building Chateau Sheree and Moore Manor.” Sheree seems to like the idea. She tells Kenya “We should’ve done this a long time ago.” Kenya tells her “I had contractors to deal with.” Sheree tells her “I don’t really need much help though.” Kenya laughs.

Kenya confronts Sheree about her comments to their mutual friends. She tells her “I heard about the laundry list of items that you noticed or observed.” Sheree says “You threw Porsha and Phaedra out.” Kenya says “I did throw Porsha and Phaedra out.” Kenya tells her “At least I live in my house.” Sheree says “If I wanted to live in a house with no baseboards or trim I would.” Kenya tells her
“I don’t want trim.” The argument intensifies until Kenya decides to leave.