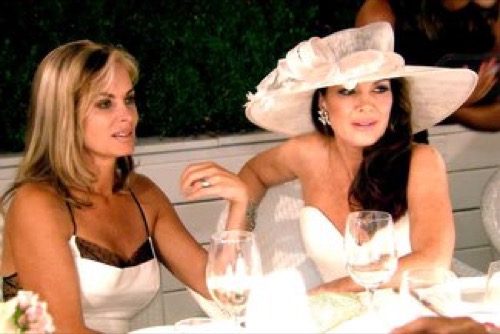 Tonight on Bravo The Real Housewives of Beverly Hills airs with an all new Tuesday, January 12, season 6 episode 7 called, “Pretty Mess,” and we have your recap below. On tonight’s episode the women continue their adventure in the Hamptons. Eileen Davidson is still upset about being interrogated by Lisa Vanderpump about her “affair” with Vince.

On the last episode, the women traveled to The Hamptons to celebrate Lisa Vanderpump on the cover of Bella Magazine, but Lisa’s feathers were ruffled when she felt slighted by her friends. Yolanda’s ongoing battle against Lyme disease found her in Cleveland–and under the knife. Kyle was devastated by news about Kim. Did you watch the last episode? If you missed it we have a full and detailed recap right here for you.

On tonight’s episode per the Bravo synopsis “the women continue their adventure in the Hamptons. Eileen is still upset about being interrogated by Lisa Vanderpump about her “affair” with Vince. Lisa Rinna gets prudish watching Erika Jayne’s videos, and the women all get a taste of Erika’s alter ego when Kyle’s good friend Bethenny Frankel invites everyone to dinner. Yolanda misses all the fun as she recovers from her surgery in Cleveland.”

Lisa Rinna and Lisa Vanderpump were discussing some mutual friends on tonight’s episode of “The Real Housewives of Beverly Hills” when they ended up on a topic that no one wished they had.

Apparently the two Lisas know a couple that’s going through a rough divorce and so everyone was weighing in. And just as they were saying how hard it must be to go through a divorce, Lisa Vanderpump decided to ask Eileen about her own situation and how she was able to cope through it. Though to be fair Lisa, she hadn’t known that Eileen would answer her answer back “which divorce”. It seems Lisa hadn’t known that Eileen has been married three times much less been divorced twice.

So Lisa was a bit thrown by that, but once she got over her shock she honed in and wanted all the details. Particularly about the second divorce which was caused by Eileen meeting her third husband. Although Lisa cut through the red tape and just asked out right about details regarding the “affair”.

And that was kind of an awkward conversation that Eileen soon came to regret. She had felt uncomfortable and the other ladies at the table had seen that on her face. However, Lisa Vanderpump kept going in for answers until eventually she got them.

Therefore, Lisa Rinna later told Eileen that maybe she should tell Lisa Vanderpump that she was uncomfortable with the conversation. But funnily enough it was Lisa Rinna that ended up being too afraid to speak her own mind, for once, when she finally met Erika. Erika is a singer/ performer and as it turns out her videos are a tad too raunchy for Rinna.

Erika was pretty cool and like Lisa Vanderpump had said – she was a living Barbie doll. Which in fact was one of the reasons that both Lisa and Eileen liked her. And why Bethany couldn’t help herself from making comments. It seems that Bethany like Lisa Rinna found Erika’s persona to be too much at times and she too judged her before meeting her.

Only Lisa Rinna gave Erika a chance and that’s something Bethany couldn’t do. Bethany just started calling Erika names right out of the gate. As if she was nicknaming her as a joke but she just kept up until it got annoying.

Like how many times can you call someone Bambi and hooker before you realize that Erika has an alter ego and that Erika Jayne isn’t who she is in everyday life.

Though thankfully Bethany did let up after a while and she actually asked for Erika to show her some moves. Which Erika did but Bethany split her pants when she tried to do a body roll so Erika found it funny that in spite of what Bethany has said about her career – it wasn’t as easy as it looked. So that put their meeting back on a happy note.

But Erika did pick up a few things. She knew that Bethany was judgmental and she also knew that Lisa likes to make people around her uncomfortable. And the latter part she learned after it was her turn to answer all of Lisa’s questions.

So maybe it’s not everyone else. Maybe Lisa Vanderpump really as manipulative as people say and she keeps people on edge as a way to control them.

For instance, Eileen had in fact tried to bring up her earlier conversation with Lisa with her and she had even said that it had reminded her a little of when she had spoken about the same thing with Brandi. Yet Lisa had flipped it around and somehow made it Eileen’s fault for being upset. So Eileen had to hastily end the conversation because she knew nothing was going to get resolved.

And that could have been what Lisa wanted.