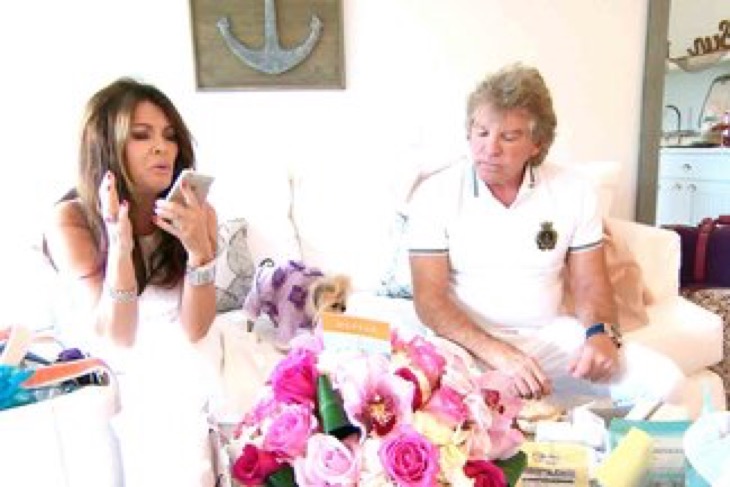 Tonight on Bravo The Real Housewives of Beverly Hills airs with an all new Tuesday, January 5, season 6 episode 6 called, “Hamptons, 90210,” and we have your recap below. On tonight’s episode the women travel to The Hamptons to celebrate Lisa Vanderpump on the cover of Bella Magazine, but Lisa’s feathers are ruffled when she feels slighted by her friends.

On the last episode, the women were intrigued with Yolanda’s friend Erika, whose short skirt and flashy Cartier ring left a memorable impression. Lisa Vanderpump paid an emergency visit to her veterinarian’s office. Eileen inadvertently referenced Lisa Rinna’s comment about Yolanda’s illness in front of the other women — including Yolanda. Later, on the eve of getting her breast implants removed, Yolanda made a startling announcement to her children. Did you watch the last episode? If you missed it we have a full and detailed recap right here for you.

On tonight’s episode per the Bravo synopsis “the women travel to The Hamptons to celebrate Lisa Vanderpump on the cover of Bella Magazine, but Lisa’s feathers are ruffled when she feels slighted by her friends. Yolanda’s ongoing battle against Lyme disease finds her in Cleveland–and under the knife. Kyle is devastated by news about Kim.”

Kyle has just opened a pop up store in South Hampton, a test to see if she will open a new store in New York City.

Lisa is on her once a month business trip to film her segment for QVC. She takes alcohol wipes and wipes down everything in the hotel room. She says in confessional that her mom was very clean and had to have everything in its place, a habit she adopted. “Harry and the kids, not so much,” she says. She says that the world has so many “cooties” that it is “just beyond.”

Erika meets with her creative director Mikey, who has pulled out clothes for her to pick from for gay pride. She says she is going to Chicago, the Hamptons and Cleveland, then to pick up Yolanda and bring her back. At the end of her trip, she will be bringing Yolanda home, who is getting her implants taken out because they have leaked. Mikey asks her if she is getting hers removed, and she says no. Erika brings up other women in the friend group who have been questioning Yolanda’s illness, asking how she’s going around traveling and working on things when she is sick. Erika says in confessional that people need to have compassion about Yolanda’s illness because it’s not something that is fake.

Lisa Vanderpump asks her husband if he saw that Kim has been arrested. He says yes, he saw that Kim has been arrested for allegedly shoplifting toys. Lisa asks what toys these are, and he says that Portia is the only kid.  Lisa says in confessional that Kim would not take $600 of toys in a cart and push it out like nothing was going on, and that clearly something is going on with her. She says someone should ask her if she knew what she was doing. Lisa calls Kyle, who sounds upset but says she is okay. She then breaks down and says she can’t talk about it right now. Lisa tears up as well and asks Kyle if she has spoken to Kim, and she says no. She says it’s not always easy to help someone who doesn’t want it.

Eileen is getting ready for the trip, and her husband Vincent gets pressed about how many shoes she is packing. He brings up a dress she spent $500 on, which pisses her off. She says in confessional that he isn’t going to bring up the $500 dress anymore or she is going to bring up his football bets. She tells him that she never questions anything he does, adding in confessional that she doesn’t know why he is mad since they split everything 50/50, with the exception of her clothes, which she pays for herself. She says it must be a husband thing, and that she is going to keep buying clothes and ignore him.

Yolanda is going to have the free-floating silicone in her chest area, as well as her breast implants, removed.

Erika goes to lunch with her husband Tom. She tells him that she is going to Chicago then the Hamptons. Tom tells her that he was going to go to Chicago with her, but he has to go to Del Mar.

Erika calls Lisa Vanderpump and tells her she can’t go to her rainbow party because she has to perform in Chicago. At the end of the call, Erika calls Lisa “diva” which has her taken aback. However, she says in confessional, she guesses the two of them are even since she asked Erika in the past about her sex life with her 60 year old husband.

Lisa Vanderpump and her dog go to the location of the cover release party for the Hamptons Issue of Bella Magazine, which is graced by the both of them.

Yolanda’s doctor tells Yolanda’s husband that she had a rupture inside of her chest but the surgery is complete. He goes into the hospital room after her surgery is done, and tells her everything is okay.

Bella Magazine pampers Lisa Vanderpump with hospitality and gifts. However, Eileen has called her and told her that her room, in the same hotel, doesn’t have any room service. Lisa tells her that she can’t leave there. Eileen says they’ll have to talk later when they meet at the cocktail party. Eileen and her husband leave the hotel. Lisa says in confessional that she was surprised they couldn’t even wait to talk before leaving, and that she thinks it was a little rude and she isn’t going to tell the hotel that they aren’t good enough for her. Lisa and her dog pose on the red carpet of the event.

Kyle, Lisa and Eileen leave to go to the party. In the limo, Eileen tells them about how there was no food in the hotel. However, Lisa says in confessional that in her opinion it doesn’t matter where they stay.

At the party, Lisa confronts Eileen for leaving the hotel. Eileen says in confessional that she doesn’t understand why Lisa cares where she is staying, saying Lisa should be happy they came. She tells Lisa that they took the red eye to get there. Kyle says in confessional that Lisa wishes she were at the house with them. Kyle tells Lisa that she has had a bad week and hasn’t slept, and is dealing with Kim. The other women continue to ask Kyle about her sister. Lisa says that they all know Kim wouldn’t put $600 worth of toys in a cart and walk off with it. Kyle says in confessional that her sister is a very sensitive topic to her, but the other women shockingly just don’t care. She asks if they would want her asking them about things they don’t want to talk about.